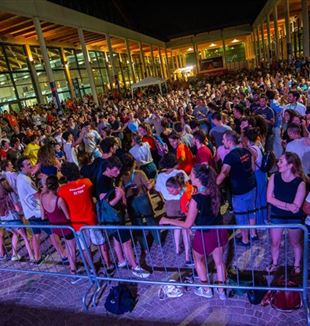 "Your name was born from what you gazed upon." The name and identity of the Meeting in these days were born and have flourished from a clear and yearning gaze to learn from reality. Pope Francis was the first to show us the way, using the examples of Zacchaeus, Veronica and Manzoni’s Unnamed, wishing “that the Meeting will always be a hospitable place, where people can “fix their eyes upon faces”, in an experience of their own unmistakable identities”, without nostalgia or fear. Alongside the Pope, President Mattarella also asked us to “re-start from the person” and to “face the new with courage, without paralyzing nostalgia, always maintaining a critical spirit and openness towards those close to us”.

What came out of this year’s Meeting was, first of all, a consideration of the social context of our country, including uncertainties over its leadership. No new methods of government were proposed, but what came to light were examples of the administration of public affairs which have the good of everyone at heart. From mayors to regional presidents, to politicians of the Intergroup of Subsidiarity, who spoke in a constructive manner, to the President of the Confidustria, who was engaged in discussion with the President the CISL (Confederazione Italiana Sindacati Lavoratori), as well as ministers Bussetti, Moavero and Tria. Each brought their own insight alongside that of the others, showing a concrete interest for the country.

Meanwhile, in the more thematic sections of the Meeting, the protagonists of the social and economic world spoke about Italy’s vitality. They reflected on its cities and their enormous potential, as well as talking extensively on health, work, innovation. They spoke of an economy that only makes sense within a framework of broad sustainability, in which the person, and their talents, regains a central role.
A common thread throughout the entire Meeting was the dialogue between people of different faiths and cultures, within the larger framework of religious freedom. We looked at the ecumenical relations of Pope Francis and the late Cardinal Jean-Louis Tauran, as well as at other experiences such as the Florentine School of Higher Education for Interreligious and Intercultural Dialogue. The most authoritative voices of the Islamic world resounded, from Al-Azhar to the World Muslim League and its Secretary General Muhammad Bin Abdul Karim Al-Issa, as well of the Jewish world. In the auditorium, we listened to the dramatic stories of men of different religions who work together in an attempt to contain the enormous damage of war, in countries such as Syria, as was recounted in the testimony of the Christian and Muslim religious authorities of Aleppo. Token of this common thread was the remarkable exhibition "Francis and the Sultan 1219-2019. The encounter on the other side", which highlighted the intimate relationship between dialogue and identity.

The Meeting was like the exhibition "NOW NOW", which presented seven young artists in the act of producing their works live: an expression that is nurtured by looking at their experience of birth, growth and development. The Meeting's visitors were attentive, curious and eager to learn, they crowded the talks on artificial intelligence, as well as the testimonies of the international cooperation that works to help people within their own homes. Both young people and adults cheered for great sports champions such as Javier Zanetti or Valentina Vezzali and for two evenings filled the Galli Teatre to its brim for the contemporary reinterpretation of Lagerkvist’s Barabbas, a classic of the fifties, gaining stimuli and inspirations that – as will be the case for many of the visitors – will accompany each of us throughout the year.

This Meeting on the gaze was also a Meeting with growing numbers. The 179 meetings with 625 speakers, 25 shows, 20 exhibitions, the 35 sports events held in an area of 130,000 m2, have attracted more visitors than last year, as was perceptible by anyone who roamed the Meeting’s corridors in these days, not to mention the induction of 23 million euros in the local economy, as calculated by the Observatory on Regional Tourism.

In conclusion, this year’s Rimini Meeting was not the place for those who love predefined theses, but rather a place for those who wished to broaden their horizons, making full use of reason to know reality. The best example of this is was an exhibition with a strange title, which recalls some of the titles of past Meetings: “Bubbles, pioneers, and the girl from Hong Kong”. This told us of the aspirations, hesitations and fears of a generation of young Americans who showed respect and curiosity in the face of their questions. Free of the worry to obtain an immediate answer they showed desire to tread their path, in an encounter between people that can help everyone to come out of their cocoon.

This year’s Meeting proposed an itinerary that we lived together and that was full of discovery. We already look towards its forty-first edition: this will be held from 18 to 23 August 2020 and will be entitled "Devoid of wonder, we remain deaf to the sublime".