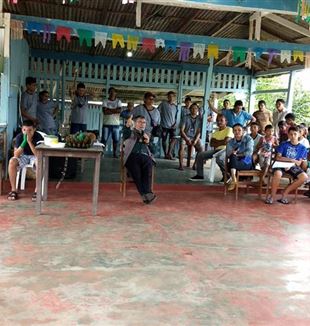 At the beginning of every school year, the Our Lady of Graces Education Center (CENSG) invites its teens and preteens on a weeklong vacation. Each year we suggest a theme that, along with the vacation itself, becomes a touchstone for the whole year. This year’s theme had to be A Synod on the Amazon. We asked ourselves how we could help our young friends understand the beauty and importance of Pope Francis’ encyclical Laudato si’, a text written for “every person living on this planet”.

With this text as a starting point, the need to deepen the theme of integral ecology in order to find a common path (syn-ódos in Greek) arose from the heart of the Pope. Understood as such, synods have been a long-standing part of the Christian experience: that is, to walk alongside friends who are open to being educated in the faith and in love. This means protecting the planet Earth so that it can continue to be full of life, beautiful, and sustainable as God created it to be.

Scientists say that this has to happen by the end of the twenty-first century or it will be too late, and the planet will not survive. The Holy Father invites the Church (and in particular, the Church in the Amazon) not to remain indifferent to or to ignore this demanding challenge.

On the vacation, everything helped us reflect on and enter more deeply into the content of Laudato si’: the songs, the games, the movies, seeing nature so beautiful and abundant with water, birds, and flowers, and with healthy foods that are often missing from the dinner tables of many of our young friends.

The theme “Beauty in Nature” awoke in our preteens the desire to search for the beauty that God “has hidden” in nature. And like the animated film The Ant Bully, we woke up and found ourselves “apprentices” of the animals, even the smallest among them like the ants who help each other survive and enjoy their goods by protecting the home they share without any aggression toward those who are different from them. From contemplation on the work of taking care of our common home (whether that be the planet or our friendship, which is the home that Christ has given us) and in the work itself we found the appreciation for what is good because even Jesus described His father as the “Eternal Worker” (cf. Jn 5:17). Songs like "Pim Pam," "Comunhão," and "Filho," those by Milton Nascimento, Cidadão and others by Fr. Zezinho warmed and enriched our hearts. 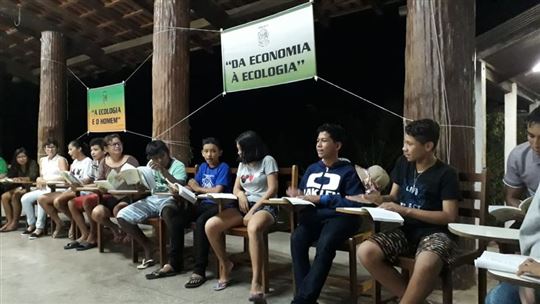 With our teenagers, the main topic was “From Chaos to the Cosmos.” We started of with Pope Francis’ beautiful meditation on the “Gospel of Creation.” "Meu Pai," "Um Lar," "Planeta água," "Cidadão," "Por onde for," "Utopia," "O cio da terra" and other songs accompanied us on our outings, in our small discussion groups, assemblies, and even in the frizzi.

But what about reflecting on the connections that unite a healthy economy with an integral ecology? We rented a boat for 70 people, among whom were adult teachers from the CENSG who gave up their personal vacation time to join us on this weeklong group vacation with their students. The kids talked about how beautiful the experience was for a whole year afterwards, and they kept asking the entire year: “When are we going on another vacation together?”

We left town at midnight (the vacation house was on the shores of a lake). We wrapped up our nets, loaded up our supplies for the vacation games and our tatami mats to sleep on the floor of the boat, and then, by the light of the moon, we navigated through the forest for six hours. At dawn we arrived at the “Remigio” Community where 25 to 30 families live out the Christian faith in community. We had some coffee with them, and they told us about how they produce most of their food, appreciating the thousand-year-old traditions that obtain almost all of its food from casavas, yucca, fruit, fish, and hunting; and thanks to the feminine genius, these products are also seasoned and flavored naturally without any artificial additives or preservatives.

We learned to appreciate the experience not merely because we survived in the forest, but because we had a practical experience of the chapter in Laudato si’ where the pope speaks about the syntony between economy and ecology. It had nothing to do with liberal or conservative political ideology, but a simple and deep experience of communion among the people of the community and an experience of respect for nature; anyone who tries to deforest that area or to go there for intensive fishing is firmly but respectfully pushed out. One is left fascinated by the great dignity of these men, women, and kids who live in syntony among themselves, taking on different jobs together and who are united in prayer, in their free time, in sports, in the school they built on their own, and in harmony with nature. There are no complicated discussions involved, only a simple life that should loved and respected far more than it is.

There is no talk among them of corruption or of millions of reais being embezzled. In the nostalgia of sons and daughters who have moved to the city to study and to go to college, we have heard that yes. But in the faces and words of the sons and daughters of the community, we have also seen that they were with us, how they studied in the city and have today returned to work for CENSG while living far from where they grew up. And we saw how the joy of being reunited with brothers, parents, relatives, and friends again vibrated through them. 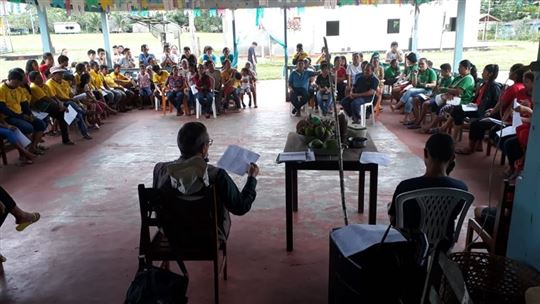 It was easy for those originally from the “river” community to talk to our teens and preteens (who unfortunately live in neighborhoods immersed in violence) about memories from the first years of their life living in the “deep Amazon” where they were learned about life, were educated to respect for their elders, to have and to live the faith, and to desire fellowship and to share the joys and sorrows of their neighbors. That day we met a father who the year before had had a terrible accident in the city of Parintins; afterwards he had to have both of his arms amputated. Everyone came to help him and his eight-year-old son, and now he offers his faith and his song to his community; he has a beautiful and dulcet singing voice. From a young age, he delighted the community with his singing, and today he continues to give what he still has; he even directed us as we celebrated Holy Mass with the entire community. After Mass, we had lunch together. We don’t know how, but we had enough food to feed everyone. In the afternoon we headed on our way back home, and along the way we helped a sinking boat; we used our pump to draw out water that was coming in from a breach made by a log hidden under the surface of the river.

After this, it was easy to approach the chapter on ecology and man the next day. Man is not divided or meant to dominate each other. We reflected on our encounter with the “river” community and we sang "Caçador de mim" along with Milton Nascimento. Our nature left us free either to stop there (with ecology) or to keep going to follow our vocation as men and women, that is, to reach that level of nature in which nature becomes aware of itself: dependence on the Creator and dependence on nature. This means that we must never act against nature and not stop there either because nature is the sign of Another. Therefore we must continue in our search for our very selves, as Milton Nascimento’s song says. “By dreaming big” and staying “connected”, we discover our vocation because, as Laudato si’ teaches us, “Everything is interconnected.”#SynodAmazon