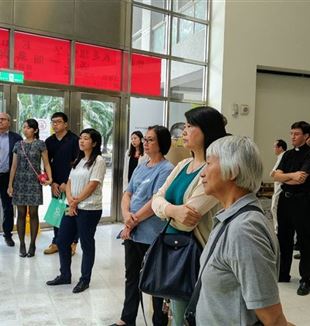 It’s a Saturday morning like any other at Fu Jen Catholic University in New Taipei City, the only difference being that there’s movement in the Foreign Languages and Literatures building. By eight o’clock in the morning, a conference room is ready to welcome a daylong presentation of the first edition in Chinese of the book At the Origin of the Christian Claim by Msgr. Luigi Giussani. About sixty people including three panelists and a number of passing visitors are waiting for the opening address.

When I ask these young Chinese students why they helped prepare this event, many reply in more or less the same way: “The meeting on Thursday night (School of Community) is a welcoming place,” or “I feel more at ease and freer here compared to the everyday pressures of college.” And the striking fact is that almost none of them are Christian, yet in a simple and concrete way they are experiencing what Giussani’s book explains and shows so brilliantly: the life that Christ proposes, whenever it is lived out or at least nurtured, naturally generates friendships and a more human way of understanding relationships; in a word, it generates Christian charity.

For this reason, too, accompanying the book presentation is a small exhibit on the person of Jesus. It highlights the charitable work that the priests of the Fraternity of St. Charles invite to the students of Fu Jen to. The title of the exhibit “And Who Do You Say I Am?” is almost an affront to a culture and a world that knows Christ only at a distance; during School of Community, one student stressed that only when we propose what first and foremost fascinates us about the person of Christ does “the crowd” become fascinated. It’s not about selling a product, but being a witness to what is happening in our own lives.

The exhibit’s section on charity is what is leaving the deepest mark on the various visitors who, for the most part, are university students. This suggests that it’s a crucial contribution and one very much longed for in a society experiencing great growth in terms of economics and general wellbeing, but also where the essential things, perhaps quite easily, are forgotten. The precious fruit of the Christian experience is precisely this qualitatively different love that everyone is secretly awaiting. 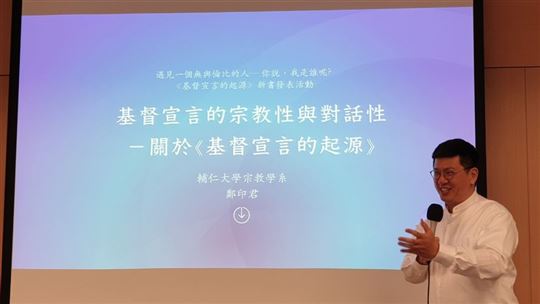 The conference opens with greetings from the Apostolic Pro-Nuncio Slađan Ćosić, the Vice President of the university Fr. Leszek Niewdana, the chair of the Italian Department Professor Chang MengJen who was jointly responsible for sponsoring the event, and the Head of the Office of Economic, Commercial, and Cultural Promotion in Taipei Davide Giglio. Afterwards, Fr. Donato Contuzzi, priest in the Fraternity of St. Charles on mission in Taiwan, introduced the three presenters and underscored that the event was the natural next step in a history that began with the presentation of the Chinese edition of Fr. Giussani’s The Religious Sense.

Taking Fr. Contuzzi’s words as a starting point, the first guest Professor Zheng YinJun, chair of the Department of Religious Studies, put the book in dialogue with The Religious Sense, the first part of the PerCorso of which the “Christian claim” is the second installment. A particular comment of his is quite interesting: one cannot understand this book without its natural premise, that is, the longing for truth that dwells in every human heart. Zheng’s clear insight into this typically “Western” text is striking, and he notes that Giussani enters into dialogue with the world of his time but does so by starting from the concrete experiences of his own life. He underscores one’s personal experience as foundational to Fr. Giussani’s mode of thinking and his passion for humanity—all of the elements that traverse the differences separating East and West because they are profoundly human.

The highpoint of the discussion is perhaps Zheng’s introduction of one of Fr. Giussani’s key concepts: “the other.” Firstly, Zheng highlights its importance in Western thought, but then, with great intellectual acuity, affirms that by writing it with a capital “a,” Fr. Giussani “changes” its meaning: in the encounter with the other, whoever he or she may be, the person comes to better understand who “the Other” is; one can only understand who the Incarnate God is through human means. Zheng concludes by saying that in the thought of Fr. Giussani, religion is not our happy place or safe space; it is the opposite: one’s religious sense is the fundamental starting point of the human person. Christianity does nothing more than propose itself – hence, the Christian claim – as the full answer to this question and as the ultimate goal of human pursuits. Reason is challenged to not exclude the possibility that this great Mystery that we have always desired took on flesh and made itself present as a person in history. The claim is simple yet very challenging, Zheng concludes, because it puts an essential question into play: Is this man, who lived two thousand years ago, really God? 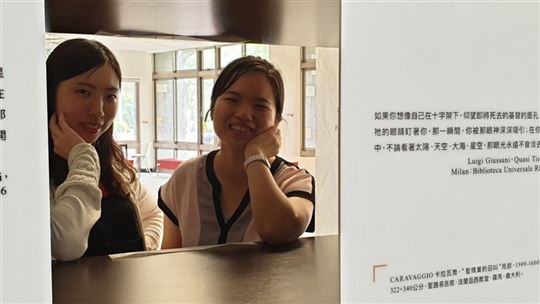 Following Zheng is Fr. Otfried Chen, secretary-general of the Taiwan bishops' conference. Instead offering a theological reflection, Fr. Chen proposed a variety of insights on today’s need for the experience of the faith in Taiwan. His comments began with praise for the CLU students he had met while he was studying theology in Freiberg: “They had the courage of the faith, the capacity to reflect and think logically. I immediately thought that, in order to form young people in this way, Fr. Giussani must truly have been a genius in communicating the faith.”

Many of his insights touched upon nuanced and complex topics: the crisis of faith in the family, the growth of consumerism, and the high degree of secularization both in the West and, generally speaking, in so-called developed nations such as Taiwan. Fr. Chen’s concluding comments returned Fr. Giussani: “The Catholic faith is already beautiful; we just have to live it out. Fr. Giussani drew people with his teaching because his very life was transformed by the experience of faith. The Church needs a powerful education in the faith; the three volumes of Fr. Giussani’s ‘PerCorso’ provide just this.”

Next was a short but intense witness by Fr. Ambrogio Pisoni, professor and chaplain at the Catholic University of the Sacred Heart in Milan. Fr. Pisoni retraced the steps of his return to the faith and his discernment of the priesthood after his encounter with Fr. Giussani, a living example of what the pages of At the Origin of the Christian Claim document.

After a short break in the afternoon, the tone of the conference room changed; a guitarist lead a few songs: “La Strada” by Claudio Chieffo–a selection already familiar to the “Thursday night students”–as well as two songs in Chinese and one in Taiwanese. The goal was to try to share the experience both of the charitable work that marks the life behind the pages of the book and of how one might answer the question of the exhibit: “And you, who do you say I am?” 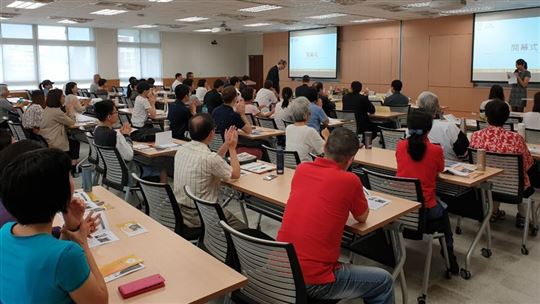 A few brief but meaningful witnesses followed. For example, one came from Bernardo, a sophomore foreign languages and literatures major: “At first, I went to the Saturday Charitable Work for the Italian pasta the priests would make, but later I realized that I needed that time there.” Then there came a few video interviews that focused on the relevance of the encounter with Jesus. The short and simple responses of the interviewees revealed how it is concretely possible to live the Christian life. The afternoon ended with time for small groups where the participants were invited to share their experiences of charity as well as any hesitations or difficulties they might have had. In the style of School of Community, the small group discussion surprisingly revealed a rich set of insights and reflections on the participants’ experiences.

At dinner with a few friends, Fr. Donato reminded the group of how important doing public gestures like the book presentation was for the small CL community in Taiwan: “In order to understand who we are, we have to tell everyone, publicly. The faith deepens when it is offered to others.” He added that until the faith becomes culture and makes an impact on society, we will need to express ourselves in public spaces. This has been the same dynamic of the faith for the last two thousand years: Christian communities are never preoccupied with “changing the world” or starting a revolution. Instead, they have never given up on expressing their identity and who Jesus is to them, ever ready to give reason for their hope.