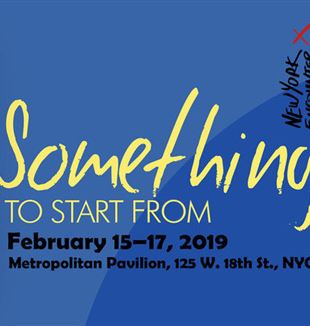 With about 350 volunteers working together tirelessly, the New York Encounter was host to hundreds of people in 2018. This year, on February 15-17, the eleventh edition of the Encounter will take place at the usual Metropolitan Pavilion in the heart of Manhattan. “Has anyone ever promised us anything? Then WHY do we expect something?” is the Cesare Pavese quotation accompanying the 2019 theme, “Something to Start From.” As always, the vibrant life of the Encounter is nourished by the volunteers who, whether it be by ushering, serving coffee, or guiding exhibits, each year choose to dedicate their time, energy, and heart to a place that fosters friendship and cultural dialogue following Pope Benedict XVI’s claim that "the intelligence of faith has to become the intelligence of reality."

Once again, this year the opportunity to volunteer is extended to all who wish to do the same. “Ultimately, … we volunteer because we want to live our lives for another, for something that is worth living and dying for,” said Fr. José Medina to the 2018 New York Encounter volunteers. “We enter the New York Encounter with the hypothesis that … to give [my] life for another’s work is the fulfillment of my person.”

The hypothesis is tested each year and each year the result is evident in the experiences of the volunteers who seem to gain as much if not more than what they give. “This was a beautiful experience,” wrote Peter, a university student who last year served as a tour guide for the exhibit on the life of Msgr. Luigi Giussani. “It was a moment of community with my friends … and with all those who came to listen and learn, particularly because I became more aware of the education of my own desire for goodness in my life and the lives of all those I meet.” Similar sentiments were also expressed by Carie, a coordinator for the Special Teams who recalls the first year she decided to volunteer at the Encounter. “I said yes to someone who put before me a particular need, not some vague duty,” she wrote. “What I found in my hands that were busy accomplishing unforeseen tasks was the real intangible thing that is the New York Encounter: He who is among us. I found myself happy working for this that I love.”

These are simply two of the countless of examples of fruits seen by people who place themselves in service of another out of love rather than mere generosity, the latter which, according to Fr. Medina, “exhausts itself in action.” This love will run in the veins of the Encounter this year also, and we encourage all those able and willing to test the hypothesis of belonging and volunteer their time to the New York Encounter.

All who wish to participate in the 2019 New York Encounter as volunteers may enroll on the Encounter’s official website by January 15, 2019.