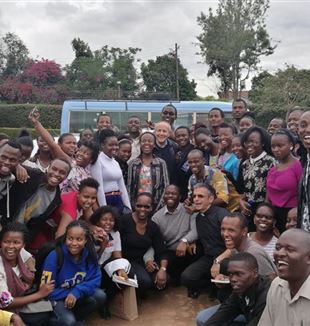 “Jean Marie! He came to find us here, in Burundi. Don’t you see that nothing is missing?” Not even at thirty years of age, a little after marrying Ngozi in Bujumbura, the capital, in the South of the country, where he is continuing his studies in medicine. Today, he is standing in front of Julián Carrón who is listening to him together with a hundred other people in Nairobi for the Assembly of Responsibles of CL in Africa. It does not matter where they come from: Kenya, Uganda, South Africa, Nigeria, Angola, and other Countries on the continent… It only takes a few words, Friday night during the introduction, to feel embraced, “preferred”: “We should be conscious of it. This embrace is a fact. And even before the embrace of each other, some of us who are strangers to each other, the fact that we are here is the embrace of the Mystery,” says Carrón.

These brief words describe the intensity of two days in the heart of the Kenyan capital. It is not enough time to embrace all of your friends, either. Reception opened at 3 p.m. on Friday, and already at 4 p.m. everyone was in the hall. “We are preferred. And we may not understand everything in these days, but if we catch this evidence, ‘this beginning’, then it will be enough to fill our life with hope.” The circumstances do not count; Carrón will come back to this many times during the assembly. “The beginning is what allows us to be here today. We would be crazy not to recognize the grace that we have received.” But that is not enough: “We have to work, to walk a path for this awareness to grow.” And again: “We are here together to verify if what we have received can last forever and overcome any situation or challenge that we face,” he adds, inviting everyone “to give witness to their path and the difficulties that we live every day.”

We don’t have to wait long. Everyone has their difficulties to share: in conversation, at lunch or dinner. Or in the assembly. Jean Marie, for example, is a medical student from Burundi: “When I met the movement, I discovered my freedom, I began to life a full life. And a useful one.” Then, he moved to the capital, far from those first friends with whom he had started a small School of Community at the university. “Ultimately, though, I was consumed only by my studies, I realized that I didn’t have any more time for myself. Life became a worthless routine. And I was unhappy.” He spoke about a great emptiness within himself, and called his friend Rose in Uganda: “She helped me. I began to read Traces. And I found a line from Giussani. He said that one should fight for beauty, because without beauty we cannot live. Here was the diagnosis: I had lost beauty.” Then a fact, a patient whom he had treated earlier saw him again at Mass. Jean Marie smiled after Communion, when he was returning to his seat, and invited this patient to have dinner with him: “I understood that he was grateful for the way I looked at him. But how is this possible? In my ‘emptiness’, the same look passed through me that I too had received. To be in front of that person made me feel as if Jesus was looking at me again in that moment.” 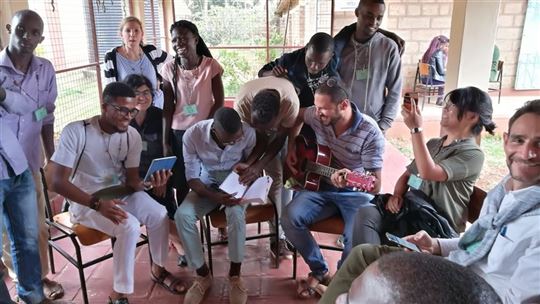 Emptiness and beauty. “Do you understand?”, replied Carrón: “This is the problem of life. Without this beauty, life loses its center. So you search for it. And then you become aware of it.” Everything is in front of us and we do not see it. “There is no confusion in Burundi that can impede this beauty from happening. We already have everything, but we are affected by our emptiness, incapable of seeing reality. While the response is there. We all have our Burundi, but we should stop thinking that the answer to the emptiness is something else.”

The provocation is eveywhere in reality. As Evelyn, from Ivory Coast, says. Her husband lives in France and her parents are very sick. “Now my mother has relapsed, while my father is still sick. I was afraid of losing them. Even in the experience I am living, I could not find a way to be in front of them.” “We need to see the victory of Christ. This is the path,” Carrón continues, encouraging the stories of many who got up to share their experience or ask questions. Luigi, a South African of Italian-Hungarian origin. He had been traveling all over the world and now returned to Africa, after encountering the movement, “an encounter that exalted my I”. He was reawakened again by a colleague who called him, a few days ago, because he had asked her about entering the Fraternity. “Do you see?’, replied Carrón: “An encounter is such that, in whatever circumstance, you want to relive it. You don’t need anything else beside this experience.” It is not a question of performance, “but of saying yes. What the Mystery will do with your ‘yes’ is His problem. The victory is in that yes, which is all yours.”

What the Mystery can do with a “yes” is in front of everyone’s eyes. It is enough to listen to Arnold and Marvin, university students from Uganda, who grew up with Rose in Kampala and now are taking everyone on a journey through modern music (Shawn Mendes, Avril Lavigne, Coldplay, Calum Scott…) as well as their own songs. “From emptiness to fullness” is the title of the evening, where they tell about themselves, about their encounter with the movement, and of its deepening every day.

Or it is enough to listen to those who spoke in the two assemblies. Pascal, from Cameroon, a father of five and teacher at a high school, facing the turbulence his children experience as they grow up, asks himself what it means to stay in front of their freedom as a parent. “We all have an emptiness that needs filling,” answers Carrón: “We are looking for happiness. They are looking for it in fun, in games. But we also do this. Yet, the point is whether there is a presence in front of them that can challenge them with a fullness that cannot be found elsewhere.” 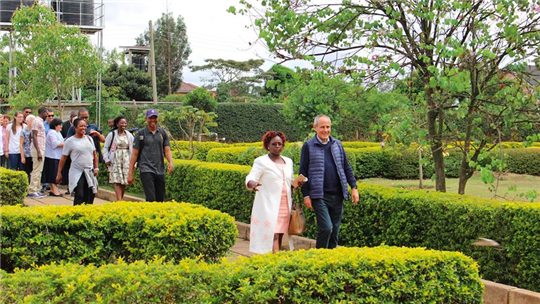 We had already spoken about education Friday morning, in a meeting with Carrón at the Cardinal Otunga school, one of the many educational realities born in Kenya in the last twenty years out of the experience of the movement. It was an occasion to present again an exhibit on “the risk of education” by Father Giussani, prepared by some members of the community. Father Gabriele, a missionary of Saint Charles, spoke about it at the assembly: “We included in the exhibit the question: ‘Who am I?’ I understood that in order to educate another I have to educate my life first.”

Like for Fredy, a Ugandan teacher: “Every morning, I go to the gate to chat with my students. They tell me about their difficulties, their problems. But I recognize the silence with which I approach that gate. How can this be? I spoke about it with a friend and he said: ‘How could you go there any differently? Without that silence, there would be nothing’.”

“That silence is what nourishes life with the awareness of what we have received,” Carrón said that evening, closing the Assembly: “We have seen it in these days. The crucial question is the emptiness that we live. It is not only our problem, but everyone’s.” The answer cannot be a rule, a discourse. And not even a project, “something that we are capable of doing,” explains Carrón again. All we need is “a moment of beauty” to captivate us: “This is the origin, the beginning, where we find the answer to our need. We can lose ourselves or find answers in other things. But our hope is in us, in what we have received.” There is a road, a path, in which no one is alone: “We are friends for this: to seek Him and not let ourselves get distracted. To seek Him is the only answer to the confusion, the emptiness, the desire to cry. I hope that we become even closer friends, because there is nothing else to seek.” Each one in the place where he is: “In Milan as in Burundi. This is the companionship. We can be friends if we give witness to this. I cannot leave here ‘without you’.”