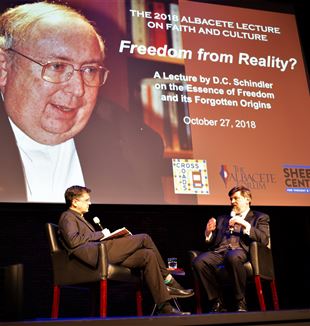 It’s fitting that the 2018 Albacete Lecture on Faith and Culture take place on Bleeker Street in the heart of Manhattan’s Greenwich Village, once a hub of American avant-garde culture. The annual lecture, sponsored by Crossroads Cultural Center, is held in memoriam of Msgr. Lorenzo Albacete, beloved priest, respected theologian, insightful author, and devilish humorist, who would have relished the bohemian history of the event’s location.

This year’s lecture focussed on the essence of freedom and the impoverished modern conception of the term. Under the watchful gaze of Msgr. Albacete’s twinkling blue eyes, projected large on a ten foot screen behind him, Dr. D.C. Schindler, Associate Professor of Metaphysics and Anthropology at The John Paul II Institute at the Catholic University of America and former student of Albacete, gave a thought-provoking lesson on the nature of freedom as understood according to classical liberal tradition and its metamorphosis since the advent of modernity. Schindler drew from his recent book, Freedom from Reality: The Diabolical Character of Modern Liberty, tracing the roots of the meaning of freedom to its original denotation in the ancient tradition.

Schindler warned that the radical refashioning of freedom is not merely an etymological concern, “A revolution in our conception of man causes a shift in the very horizon of our world, and, if this is true it follows that there are few things that are more important both personally and culturally than attending to the meanings of the central realities of human existence those things that make us human. What is reason? What is love? What is freedom? The answer that we give to these most basic questions affects the way we understand and so relate to everything else.”

Harkening back to the fundamentally social character of the Platonic and Aristotelian understandings of freedom, Schindler underlined that for the ancients, the foundation of freedom is membership in a community. The free man is understood as a member of a community, a citizen of the polis, which entails a complex set of responsibilities. Whereas the slave, is a mere individual, who may have a task, but once that task is complete, has nothing that binds him to the community as a whole.

Schindler went on to map out how this older sense of freedom was replaced or rather inverted in a twofold manner. With the advent of modernity, freedom became privatized and “possibilized.” According to Schindler, with the privatization of freedom, “we have come to associate freedom with the private sphere, the license to pursue and enjoy whatever strikes our fancy in a personal sense...it is no longer a public office but has been reduced to a private sovereignty.” But, as Schindler pointed out, the more fundamental revolution, lies not in this first aspect, but rather at the metaphysical level with the “possibilizing” of freedom, a far more radical concept with implications that have taken centuries to unfold, and whose consequences are all too evident in the contemporary world where even the meaning our very bodies, is subject to possibilizing. In the contemporary world, freedom is equated with potential for unlimited choices rather than the actualization of completeness or perfection of a thing’s nature.

From the perspective of freedom classically understood, education is crucial to the attainment of human freedom. Education as the formation of the person with a view to determinate ideals of what a human being is meant to be is the path of human liberty. But we, in the modern world, asserts Schindler, “tend to identify freedom with power, potency and possibility,” in other words with the capacity to accept or reject what is given to us in reality and to change what is already there. With the “possiblilizing” of freedom, modern man embraces a contradictory view of human liberty in which it is essentially separated from actualization in reality, rendering it, ipso facto, impotent. Notwithstanding the modern trivializing of human freedom, Schindler asserted, “The very self-undermining character of modern liberty, the self-aggrandizement, which invariably proves to be trivializing of freedom is a source of hope. Recognizing this triviality breaks the spell it otherwise might have on us, but it also entails a task...Profound desire for freedom will not be satisfied by multiplying options. What fills it instead is belonging, having our proper place in a genuine and generous order, being a member of a community that helps us to see what is real and discern the profound goodness that lies in it, the goodness that is truly for us, that will enable us to flourish in freedom.”

During the second half of the event, Fr. José Medina, the National Coordinator of Communion and Liberation in the U.S., posed questions, helping to draw forth the scope of the modern revolution, bringing to light freedom’s intersection with other core human concepts such as virtue and desire, thus excavating the impact of the modern revolution on the way we understand morality and even Christianity itself. Schindler marked the fundamental change in the concept of virtue, which is tied to the change in the understanding of freedom, from its classical sense as excellence, or a “capacity to pursue the perfection of what is noble, good and beautiful” to the modern sense of virtue understood as the power I have over myself, which is radically at odds with the Christian view of existence as dependence on a loving Creator. When Medina asked about the meaning of desire, a term very dear to Fr. Giussani, the founder of Communion and Liberation, Schindler pointed out that the modern understanding of desire as something ultimately selfish, is at odds with its original meaning, “Desire is a kind of tugging at us, it is setting us in motion. To be fully in motion we have to involve our free choice, but the setting in motion is something that the good thing, beautiful thing, is initiating, and in that respect desire is not self centered; it is essentially other centered because it is precisely the other moving me.” In the dialogue with Schindler, Fr. Medina connected this modern sense of virtue as self-control, to the silencing of desire, perceived as virtuous morality in so many modern iterations of Christianity. Yet virtue understood as self-control, the self’s power to silence desire, freedom as the power to silence the attraction of reality, is ultimately diabolical. Schindler explained the reference made to the diabolical in the title of his book, “The diabolical and the symbolical are etimological opposites. Symbol from the Greek, means a joining together, a bringing together. Diabol means a setting apart, a putting at odds. These terms capture the revolution I have been describing. The classical cosmos had a deeply symbolical sense. The things that move us by their goodness and beauty connect us to each other, they connect us to ourselves, they connect us to God. The diabolical, on the other hand, is what we now associate with freedom. Rather than uniting us, the very meaning of freedom now is to be separated from others so I can have a certain control. And what do we associate with the diabolical? Deception. Self-subversion.”

While the acute diagnosis given by Schindler might unveil a provocative historical process, a radical critique of our modern understanding of freedom, if left at that, is simply discouraging, even depressing. Perhaps the most important insight offered during the lecture was given towards its conclusion. Schindler proposed, “The first response might be to react, to separate yourself from this culture, trying to protect yourself by withdrawing. If freedom is in fact a response to what is given, we are given the modern world. This is the world in which we live, a simple reaction is not going to be adequate. We first need to be grateful for what we are given.” In response to Fr. Medina’s inquiry regarding positive starting points in the modern conception of freedom, Schindler responded, “There are authors that show forth genuine creativity, a sense of possibility that we have in the modern world that the ancients didn’t have and that is a precious thing. If it does bring a certain satisfaction and thrill to experience possibility, that is responding to something we desire, so there has got to be something positive there. The key is to root these modern developments it back to tradition, recognize the beauty of possibility, but recognize it as the fruit of our real relationships, the fruit of our possession of the good. That can liberate a kind of creativity that goes far beyond what would have been recognized in the classical tradition.”

But is a protracted study of the transmutation of any concept justifiable? Does seeking to understand the meaning of something bear fruit in reality? Schindler answers in the affirmative, “Understanding is a fundamentally receptive act. If we come to understand what the problem is, that is not just the first step. A profound understanding of a problem is already a connection to goodness precisely in the form of recognizing how it is being betrayed in some way, but that goodness in itself is liberating. We experience understanding as liberating.”

In a culminating question, Fr. Medina asked Schindler, bearing in mind what had been said regarding the nature of freedom, virtue, and desire, to share his thoughts on the meaning of morality. Returning to the ancients’ concept of virtue, Schindler responded, “Virtue is nothing but falling in love with the good, falling in love with God. Virtue is allowing God to be effective, to bear fruit in me.”

For those who knew Msgr. Albacete, a strikingly free man in the classical sense of the term, this last observation is a summation of his very character, which continues to bear fruit in the world. Dr. Schindler’s lecture, an example of this fruitfulness, invites us to experience freedom through recuperating an understanding of its true meaning, rooted in tradition, and yet open to any spark of truth we may encounter in the gift that is our own historical moment.