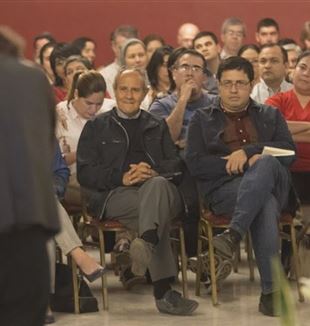 The sound of the Paraguayan harp was the prelude to an evening that was full of human experiences, of questions and challenges. On September 10, over 300 people, among whom were figures from the ecclesiastical, political, and university worlds, filled the hall at the Hotel Guaraní, in the heart of Asunción, for the presentation of La Belleza Desarmada. At the table of presenters, together with Father Julián Carrón, the television journalist Estela Ruíz Díaz and Favio Chávez, the director of an orchestra that uses recycled instruments, were engaged in a dialogue.

“What I like about this book,” the journalist explained, “is that it is not merely ‘religious’ in the strict sense of the world, but is rather a work that proposes a dialogue about the crisis of our times.” “Disarming Beauty provides a way to speak about the experience that is born from faith and that can offer a contribution to reality today,” affirmed Carrón, adding the question: “But do we Christian still believe in the disarming beauty of faith?” That is, do we believe in a proposal that is so attractive for man, that it leads him to change his attitude and the way he looks at things, a proposal that leads him to abandon violence, shutting down and building walls in response to things? 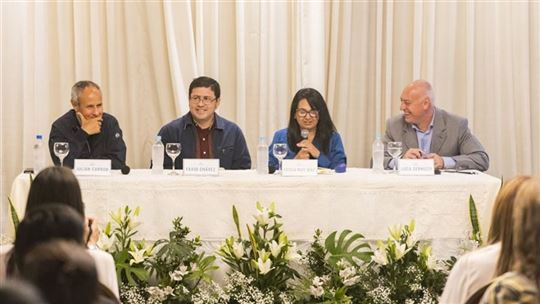 “This is one of the reasons why I decided to publish the book. I think that the beauty of faith can be a great opportunity and a contribution that Christianity gives in conformity with its mission,” Carrón underlined. The beauty of faith can face those questions relating to immigration, to economic and educational crises, to new civil rights, and to the change of epoch.

“What is this disarming beauty?”, asked Díaz: “Is it unarmed because it does not have weapons or because it is vulnerable or because by its nature it does not need weapons?” “The idea of the title came when I was writing an article reflecting on the impact that the killings at the Bataclan in Paris had on me a few years ago. I realized that for many of those arriving to Europe from another culture and religion, an anxiety that leads to violence and destruction has won them over. And I asked myself why. Some of the explanations with which this phenomenon is described were not enough for me, as if it only had to do with radical or Islamist elements,” the leader of CL underlined, noting that for these people, their radicalism walked side by side “with something deeper that determined life, like emptiness or rootlessness…”

One example of how beauty can generate a transformation, Carrón recalled, is the experience of a few of his friends in Milan, who began an initiative called Portofranco, which offers free help to young people who are struggling in school. “Many of these kids go much more willingly to Portofranco than to school, because they feel looked at and esteemed in a different way. I remember one of them, an immigrant: he arrived with a wrench in his backpack. He could have been a violent young man, like those who carried out the attack in Paris. However, this kid, in a climate and in an environment in which he was truly esteemed and helped, had abandoned any idea of violence, and had discovered a concrete gratitude for this experience he was having.” Father Carrón added that if gestures like this were multiplied, “they would make a contribution capable of responding to all our challenges much better than building walls.”

For his part, Favio Chávez, the director of an orchestra made up of young people and children who live in Cateura, a neighborhood in the middle of a garbage dump in Asunción, has shown the value of presenting beauty as an alternative to bring about change and motivation. “This kind of reflection contributes greatly to those of us working in an environment of beauty, like music,” he commented. His orchestra uses instruments that are made from items picked up in the dump, and manages to attract young people who are trying to get away from illegal activities. 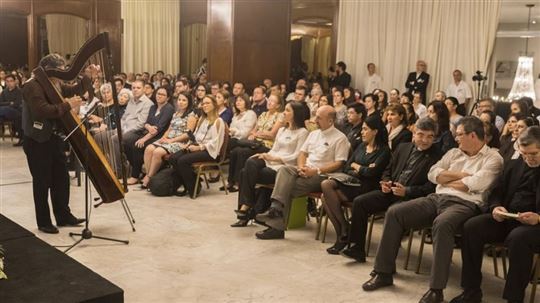 “In Cateaura, through music, we try to offer the kids points of reflection. And we try to do it with what we have at hand: trash. The garbage is what society has thrown away. We use these materials as a path of musical education. In our school, which is in the center of the neighborhood, it is amazing to see that while we play Vivaldi, Beethoven, and Mozart, someone close by is drinking cachaça (a kind of hard alcohol). We seek to create a place of reflection, while the context around us tries to deny this possibility in every way,” notes the musician, and he proceeds: “In the book, beauty is not considered as something that imposes itself; beauty enriches people and in its turn is enriched by the consideration that the other is a good.”

As the dialogue continued, they spoke about how the new generations are immersed in a kind of “bubble” that prevents them from adequately facing reality. Often the parents are complicit in this situation, along with the public institution and the rest of society in its complexity. In this sense, Christianity can be a door and an “infinite” possibility for their life. 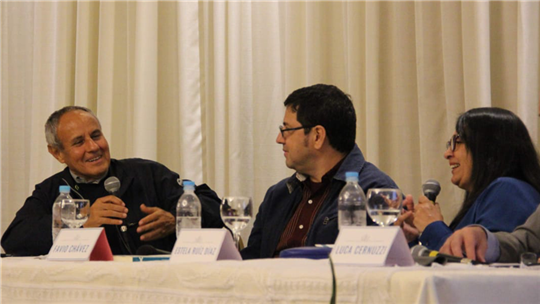 For this reason, Carrón underlined the necessity of understanding the nature of the educational and anthropological crisis from which our society today suffers: “We think that we can respond to this crisis with new rules or greater rigidity, as if it were only that easy. The problem is that the crisis is infinitely deeper; it is not only in a lack of values, or of criteria for action, it is an emptying out of the person, a lack of the energy needed to adhere to something.”

In the final part of the encounter, in response to a question from Díaz about the great pain that the Church today is living in facing pedophilia, Carrón answered: “If someone does not encounter something that totally satisfies, or if the person that has decided to give his whole to Christ in a vocation—priestly or religious—at a certain point does not follow the attraction for which he gave his life, the emptiness prevails, and because man’s heart is created for happiness and fullness, he thinks he can find it by doing these immoral things.”

Sin, explained Carrón, “is the shortcut through which we try to find the answer to our desire for happiness, but it cannot and never will be able to be adequate to the demands of the heart. If this, unfortunately, can happen to any Christian, it can unfortunately happen also to priests.”

Carrón reaffirmed that Christian hope has its foundation in a presence in reality: “This presence can sometimes appear ethereal or abstract, to the point that the phrase of Jesus ‘I am with you until the end of the world’ seems like nothing. Instead, He is changing reality in those through whom this newness erupts and acts by changing their life. This is hope. This dramatic moment in the life of the Church can be an occasion to return to a deepening of the nature of Christianity.”

It was an evening full of questions, like that thrown out by Carrón: “What can awaken a heart that is asleep? Do we Christians believe in the capacity that faith has to attract those whom we encounter?” It was also an evening full of challenges, like that of verifying, in daily life, the power of this disarming beauty that is born of faith and of a respect that is full of gratuitousness toward others.#DisarmingBeauty