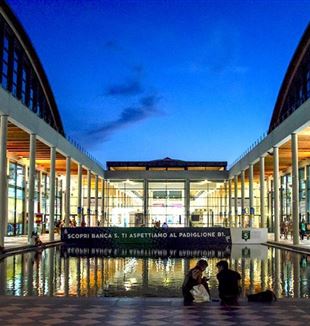 The 2018 Meeting can be summed up in three short statements. “What did I see at the Meeting? Visiting the exhibit on Pope Francis, I was moved to tears the whole time, and the same thing happened at the Brunelleschi and Job exhibits.” These were words by a European intellectual, one of the biggest names in contemporary architecture, Alberto Campo Baeza. “To be happy is to be embraced,” said the young Argentinian writer Veronica Cantero Burroni, during her talk that left a mark on this year’s Meeting. Lastly, was the statement made by a young visitor. “The Meeting? I used to think it was absolute evil. Having visited it today, I saw how stupid I’ve been for never coming before. The Meeting is an experience; it must be lived, no matter what line of thought, nationality, or religion you belong to.”

These are three seemingly fragile experiences: being moved before beauty, happiness as an embrace, and the discovery of oneself in the encounter with another. The 2018 Meeting, starting from its title, bet on the sole factor that truly moves history in a positive and lasting way: the person. “Be mindful, this is not to contrast individual happiness to an evil and hostile world,” said the president of the Meeting Foundation, Emilia Guarnieri. “It’s to emphasize an incredible amount of experiences of human realization and social composition. This is the case in the favelas of Salvador de Bahia as well as in palliative medicine research, in innovations beyond technology or in speaking about Leopardi’s Infinite.”

“There’s no formula or algorithm for it,” said Giorgio Vittadini, president of the Subsidiarity Foundation. “To contrast the decline, we must bet on the person, giving space to the stories of those who invest in themselves, even in their work, and facilitating dialogue between people of different religions, cultures, and political leaning, as it happened with our subsidiarity group. Eight days of Meeting demonstrated that this is a living and real contribution to the life of the country; it’s not a utopia. It’s not by chance that this year’s Meeting marked a new beginning after the tragedy of Genova. This was made possible through the presence of president Toti, mayor Bucci, and of the MPs, but also thanks to an organic moment of reflection on what had happened, with help from the voices of the Porto di Genova, of the terminal operators, of RFI, and of conferences on the relationship between infrastructures and mobility.”

The 2018 Meeting opened with a message by Pope Francis and one by president Sergio Mattarella. Both of them, each with his on perspective, focused on the title of the edition. Pope Francis in particular emphasized the assonance with St. Benedict of Norcia. “[As] new peoples flooded across the borders of the Empire,” he wrote, “one young man echoed anew the words of the Psalmist: ‘Who is the man that longs for life and desires to see good days?’” On his end, president Mattarella talked about the need for a spirit of peace and friendship like that of the Meeting. “It’s from the awareness that each person, with his beliefs and convictions, enriches our personal being that the possibility of a truly human world is born,” wrote the Head of State.

The Apostolic Nuncio to the United States, Archbishop Christophe Pierre, moved forward in his inaugural talk saying that “the true revolution is the revolution of the heart. We cannot force anyone to believe, especially not young people,” because faith is a new life communicated by grace and, therefore, only “through the witness of our life.” This has also been the Meeting of Job, the man who didn’t want to flee from life’s dramatic questions and to whom an exhibit and a big talk were dedicated.

In tune with the spirit and title of the Meeting was also “Through a Sea of Desire,” performed Sunday, August 19, at the Tiberian Bridge. “A show that ties the individual’s destiny with the forces that move the world,” said the responsible for the Meeting’s performances, Otello Cenci. “The text was based on Paul Claudel’s work and re-proposed on its 150th anniversary. Thanks to its adaptation, it was performed for the first time in Italy, taking advantage of the Rimini location to set the performance at the Tiberian Bridge. The show attracted five thousand spectators.”

As far as numbers are concerned, this Meeting’s figures grew exponentially compared to previous years. Attendees saw a 5 percent increase from 2017, while fundraising this year reached a new record with 120 thousand euros raised in one year. Also greater was the number of talks (234 this year compared to last year’s 118), speakers, exhibits, performances, and sport games. This year’s volunteers were 2,927, and they were the true beating heart of the Meeting. In terms of expenses, the 2018 Meeting had a budget of 5 million 972 thousand euros, most of which came from the company’s communications services (3 million 550 thousand euros) and the revenue made by food services (1 million 104 thousand).

This year, too, the Meeting came to an end, concluding the fourth decade of its history. The title of the 40th edition, which will take place August 18-24, 2019, will be “Your Name Was Born From What You Gazed Upon.”

“It’s a verse from a poem by Karol Wojtyla,” explained Emilia Guarnieri. “So, in 2019 we will have a title fully continuous with this year’s contents. In 2018, we focused on the person, man seeking and experiencing happiness. Next year, we will delve equally deeply to discover where the gaze is born, and the physiognomy of the person.”