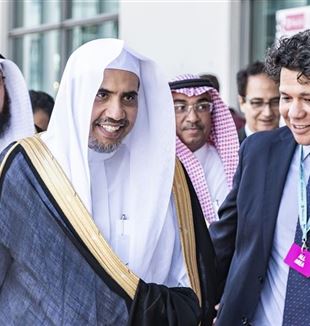 “The future is nothing other than a present, reordered to allow for God’s design to be fulfilled. That is every person’s happiness. I would like to thank you for sharing the joy of knowing who we are and where we are going. Thank you, too, for opening the door and telling the traveler, ‘Come and see, God is not dead.’” These words by Cardinal Jean-Louis Tauran from 2015 resounded at the Meeting during the talk "Builders of Bridges."

Why, though, is it necessary to build bridges in a world where the barriers of space and time have been torn down? Introducing the talk, Wael Farouq responded saying, “In the era of information, we need a bridge to have knowledge: the experience of the person. Even more deeply, man needs a bridge between himself and his humanity.” For this reason, he said, “We didn’t just invite our guests because of the magnitude of their institutional role, but because of their person.” Accompanying him on stage, for the first time at the Meeting, was Muhammad Bin Abdul Karim Al Issa, the secretary general of the Muslim World League, who decided to participate after an encounter with the Meeting’s representatives. When he reached the pavilions, “after hearing witnesses from the Meeting’s volunteers,” he asked when he could come back. 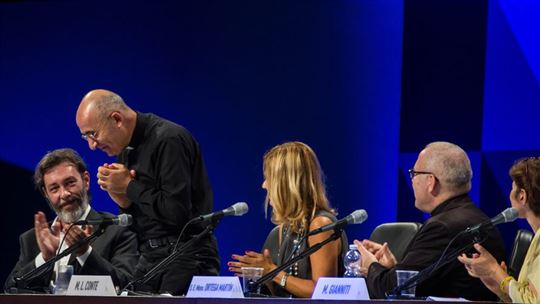 He was the one to accompany Tauran on his last historical trip to Riad. Roberto Fontolan, from the International Center of CL, retraced the great friendship with the cardinal, a “master builder” of the Meeting since his first attendance over twenty years ago. He remembered the certainty that characterized him “in the patience of God that entrusts itself to human creativity.” Speaking of the Meeting, he added, “[It’s] a place that was thought and wanted as a welcoming harbor that we can leave with an extra friend.” He couldn’t help but call everyone’s attention to the “Diciotti Case:” “How I wish that boat could be allowed to dock and those people to came to shore!”

After the contribution of Nicola Renzi, minister of the Republic of San Marino (“Our world needs free liberators”), Khaled Azab talked about “discovering the other;” he is the Director of Communications at the Library of Alexandria, which will host the October presentation on the Meeting and which will publish Julián Carrón’s Disarming Beauty in Arabic. “We’re not here to have a conference and go home forgetting what we have met,” said Farouq. “Whoever comes brings with him something that will flourish in many places outside these pavilions.” 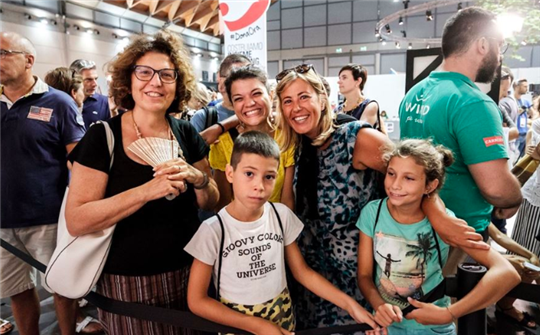 Al Issa, jurist and reformer in Saudi Arabia, began his contribution answering Farouq’s question on the experience of mercy: “Mercy is humanity’s true spirit, it is all that’s truly beautiful in our lives. There’s no true life without mercy, and there can be no peace. A man is one who decides whether to be human or not, whether or not to live out mercy with facts." He, too, recalled Tauran with great esteem as a “friend and a symbol of dialogue, coexistence, and freedom.” Thanking Italy, he also remembered “all the victims of the cultural emptiness that separates and wounds us.” The rest of his speech was dedicated to condemning extremism that exploits religion. He deemed it a “folly” of theories that, “despite history’s warning,” only perceives diversity as conflict, and “nothing other than one’s religious, ethnical, and political community to be worthy. These will be the first ideas to suffer the outcome of their thoughtlessness, though perhaps concealed by a seeming victory.” He insisted on the distance taken by the Muslim World League, which felt the need to “clarify the truth of our religion” in front of the “abuse of the sacred text and its distorted interpretations” (according to reports, out of a billion and 800 thousand Muslims, there is only 1 extremist for every 200 thousand faithfuls). With strength, Al Issa emphasized their efforts “for peace, the rights of minorities and of women, emigration and immigration, and against human trafficking, poverty, and ignorance.” After the long applause that followed, Farouq said, “We are only able to be witnesses if we recognize the witness of the other. Love isn’t blind. Love is discernment and it sees beyond the limits of the other.”

This love that forgives and reconciles was seen a few hours earlier in a talk on the reconstruction of Iraq and the consequences of war after its chaos. The Christians of Nineveh, for example, went back to the rubbles of their homes because “there was no better place to go.” Journalist Maria Gianniti talked about the expansion and retreat of ISIS (1 million before the fall of Saddam in 2003 and, today, less than 250 thousand) and of the “desire for home that is stronger than destruction.” “The Iraqi government must operate for reconciliation, because the return of the Christians is necessary for everybody,” concluded Gianniti. “In the Middle East, they have always been the bridge between other communities.” 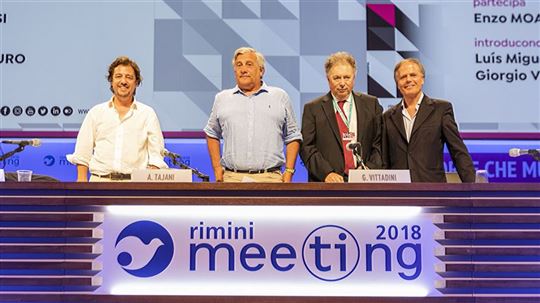 Fr. Georges Jahola is the priest who, in 2016, was assigned the role of following the reconstruction. He is conducting a thorough census of each faithful and his or her situation, facing those wounded by death, torture, kidnaps, and broken families. He said, “We don’t want to blame anyone for what’s become of us. But the social webs have been destroyed and ISIS has grown under everyone’s nose: no one can say they didn’t know. We, the Church, are working to get back in the game, and along with Qaraqosh, there may be a last spark of Christianity in the Plains of Nineveh.” Edoardo Tagliani directs AVSI’s efforts in the Middle East. He showed a video filmed in the preschool they support. The video spoke for itself: Adrian, a boy of five, is happy to learn how to count and color. He doesn’t say that Qaraqosh is his home because he was born on the run and he has always lived as an evacuee. “War creates rootless generations,” said Tagliani.

It’s natural, then, to think of Miriam, the girl who touched the world with her hope and her forgiveness. Even more touching was Alberto Ortega Martín, Apostolic Nuncio to Iraq and Jordan, who told the audience about meeting her and said, “She’s not the only one. They’re a people among which these kids were raised.” He spoke, moved by their faith. “Their ‘yes’ to God cost them everything. For us, that’s a treasure.” There are no better words than those of Pope Francis to the Meeting. “Christ’s resurrection is not an event of the past; it contains a vital power which has permeated this world. Where all seems to be dead, signs of the resurrection suddenly spring up. It is an irresistible force.” Ortega offered the witness he saw in the forgiveness of the Iraqi Christians. “The local Caritas is helping everyone, especially the Muslims, being them the majority. They bring food even to those who chased them out and now need help. It’s out of this world.” What do they ask of us? “To sustain their ‘yes’ with our ‘yes.’” When he prays for the Christians in the Middle East, he asks for two things: “Communion and witness. That Christian Syrians, Chaldees, and Assyrians may all be one—as mysteriously happens with martyrdom of the blood—and that they may be the good presence of the Lord, as it was promised, for the life of every man.”

At the AVSI stand there was a distorted map with changing distances to identify oneself in what happens far away, as if to say: What if I, an Italian, lived in Qaraqosh? Or in Africa? The responsibilities of the international community before the African Continent were debated at the talk, “What Moves the World,” where Romano Prodi talked about the “UN’s lack of strength that only intervenes when what’s at stake does not concern any of the five world powers,” and Olusegun Obasanjo, founding member of the African Union, repeatedly asked that “the international community apply the principle of subsidiarity in Africa.”

Economic wars were at the core of the debate on Europe with Luís Miguel Poiares Maduro (European University Institute), Giorgio Vittadini, minister of Foreign Affairs Enzo Moaveri Milanesi, and president of the European Parliament Antonio Tajani. The conflict is a dense one, especially regarding a lack of political and communitarian vision, the European balance, and concrete possibilities to reconcile the mutual risk between member states (therefore, solidarity) and flexible national economic politics. More painful is also the issue of hospitality, and, therefore, the confusion between economic immigrants and refugees among the 70 thousand incoming migrants in the EU this year (versus the one million Venezuelans welcomed by Colombia). “They say there are no normative tools,” said Tajani. “But adopting directives solely with those seeking asylum is a European choice. What about the others? European actions must be better articulated: integration here, aid in the countries of origin and in transitional countries, and the fight against human traffickers and neoslavery organizations. If we uphold these fences, which are, first and foremost, in our souls, this work will remain unaccomplished, and our latency and incapacity to solve one of the most important dramas in our era will prolong.” 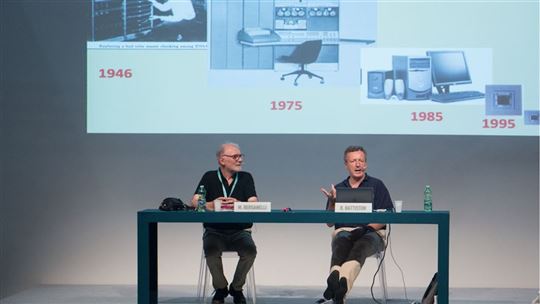 Yesterday opened the door to many more perspectives: medicine’s challenges with Walter Ricciardi, president of the National Institute of Heath, the contribution of the president of the Italian Space Agency, Roberto Battiston, questions on “the extraordinary in the ordinary” through superheroes with Gabriele Dell’Otto and Franco Nembrini, neurology, young people and work, and a dialogue with Fausto Bertinotti on Sixty-Eight.

But long before the opening of the pavilions, early yesterday morning, a group of volunteers was gathered discussing and judging their days at the Meeting. One of them got up and said, “Yesterday, seeing the Giancarlo Rastelli exhibit changed the way I worked. I worked my shift without checking the time, without counting the minutes. I went to and from Riccione to set up and take down the acrobatics equipment with my heart full.” They were all very young and they didn’t want to let life at the Meeting slip away and be a parenthesis or a waste of time. The extraordinary story of a heart surgeon who died nearly fifty years ago, the beauty of his heart, marked the life of a young man. “The true challenge is a witness that may generate meaning in great and small things,” said Farouq. “A witness that may provoke more witnesses.”