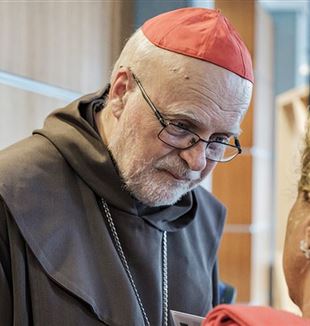 “Is there life in the universe?” Quelo would ask himself in one of Corrado Guzzanti’s most famous skits. The answer was always, “Just a little on Saturday night.” This year’s Meeting wrestled with the same question, except it did so in a serious way. The question was posed to a great scholar, Antonio Lazcano, biologist at the School of Science at the University of Mexico. For thirty-five years, he has been studying the origins and the evolution of life. His talk was located at the edge of the Exoplanets exhibit and it was titled “From the Universe to Life: Inevitable Path or Singular Event?” The theme of the talk, in a nutshell, was the necessary conditions for life to form on earth as well as elsewhere. Lazcano explained that discoveries made in recent years say that the “bricks” that make up DNA—the foundations—are found all over the universe. The conditions necessary for these substances to form are also much more basic than we thought just a few years ago. But if the bricks are everywhere and the conditions for them to flourish are so common, what phenomenon leads these elements to “leap” from lifelessness to life? That is, without a doubt, a scientific question, but it is one that leans into what human rationale cannot explain, as noted by Giuseppe Tanzella Nitti, professor of Theology and the Pontific University of Santa Croce. Lazcano said that even science cannot provide an ultimate definition of life but understanding these questions would lead to an answer beyond the scientific realm. The thousands of bioethical debates that have taken place in the past decades only support this claim. It’s not just about discovering whether extraterrestrials are real; the stakes are much higher. 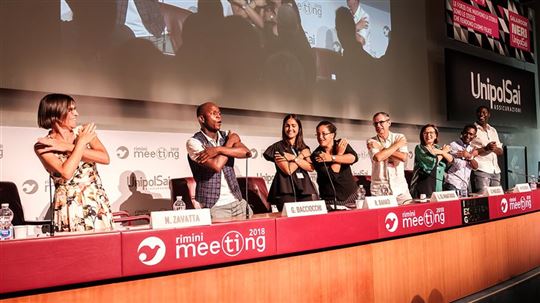 In the Fast Food area, instead, eight Indonesian volunteers were assigned the task of cleaning tables. Most of them came from Kupang to see the Meeting and participate as protagonists. “I was curious to understand what it was,” said Ari, who met CL with his wife Cindy in Holland, where they have been living for some time. “I would have never imagined something so majestic. I can see it’s not just a cultural festival, but an occasion for different people to encounter one another.” Cindy, instead, found the most shocking thing to be the logic behind Rimini being so different from the rest of the world’s. “Everyone says that the more money you make, the happier you are. Here, there are so many people paying to work, and everyone is happy and smiling. It’s impossible not to ask yourself why.” Unlike Ari and Cindy, the rest of them saved money for three years to pay for their ticket to Europe. They came out of curiosity and the desire to understand and see firsthand what the experience of CL has generated. 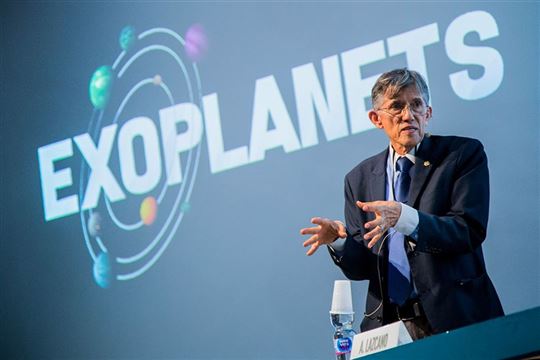 While our Indonesian friends were busy volunteering, a talk with professor René Roux, chair of Theology in Lugano, took place in Sala Neri. Last December, his university organized the first conference dedicated to Giussani’s theological thought in the ecumenical field. Though it may seem like a topic much different from the work done in such close proximities by the volunteers, it isn’t so. “What interested us about Giussani’s thought was the fact that, among other things, it’s a reflection that has shown itself to be fertile and able to move people’s lives. It’s not a Theology disconnected from the world.” Roux in particular was the first to ever attempt to study Giussani’s method of reading Sacred Scriptures. “A certain use of a critical historical method drenched in rationalism has led many to even lose the faith. Giussani, instead, didn’t stop at the reconstruction of the context Jesus was speaking in, but he emphasized the effects these words have on today’s readers. The plausibility of what He said then is verified in an experience that is possible today.”

While the news filled with stories of the “Diciotti Case” (the boat carrying 150 migrants that was stopped in Catania), Cardinal Anders Arborelius, bishop of Stockholm, spoke these words at the Meeting: “The Catholic Church in our country, which is post-Lutheran and post-secularized, has been revitalized by immigration thanks to politics of hospitality characteristic of Sweden until recently.” He explained that Catholics in Sweden make up 1-2 percent of 10 million, and 80 percent of them are not Swedish. “Every year we have to buy or build churches. In the past ten years we bought ten churches from the Lutherans. In the parishes, many different nationalities are represented. It’s not easy. Europeans are often the minority and they have to deal with the customs and sensibilities of faithful from foreign countries. This phenomenon, in any case, has given our communities new life.” This new push allowed the Swedish to better know the Catholic experience that, until just a few years ago, was seen with suspicion and prejudice. The Catholic witness and the diffusion of the lives and thoughts of the saints lead to many conversions from Lutheranism to Catholicism (the diocese of Stockholm, in fact, now has six married priests who used to be protestant pastors). This is Cardinal Arborelius’ very story: he was Lutheran but, and twenty, he became acquainted with the Bridgettine Sisters. Their witness converted him to Catholicism. He said that it is true that conversions also flow the other way, but ecumenical relationships are maturing. “They’re no longer just a subject for bishops, but for the people. Today there’s no more mutual distrust, but we are more helped to see what we have in common.” Pope Francis’ visit to Lund in 2016 and his encounter with the Lutheran world were cause and effect of the phenomenon recounted by the cardinal, who concluded, “We are a small flock, but we are hope for all Europe.” 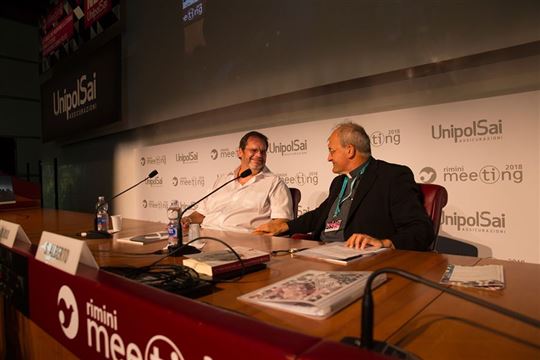 Davide was a volunteer and wore a pink shirt with the words, “donate now.” He was in charge of collecting donations that the Meeting has solicited to be able to exist. According to yesterday’s numbers, the people of the Meeting have taken this request to heart. “We receive donations ranging from one to 1,000 euros. Sometimes people tell us why they want to support the Meeting, other times they leave us fifty euros without saying a word. I couldn’t help but hug a woman with a walking stick who left us the largest donation.”

In Sala Neri, there was another event on immigration in the form of witnesses, stories, and friendships born before, during, and after the 2017 exhibit, “New Generations. The Young Faces of a Multiethnic Italy,” that has been touring Italy this past year in private and public schools, cultural centers, and even a walkway at the Milan train station. It has been seen by principals, mayors, and prime ministers. On stage yesterday there were young Italians with immigrant parents from Morocco, Congo, and Mali. Dialla, a young man of eighteen, immigrated three years ago. He now has an Italian passport and teaches Italian to immigrants like himself. “The first months were very difficult. I asked myself why God kept me alive while my brothers died in the desert or in the Mediterranean. Today I feel witness of the possibility of rebirth.” Luna, a Moroccan Law student, has attended several public events. “I didn’t want to give answers but provoke questions. ‘I’m just telling who I am,’ I’d say. ‘Who are you? What is your story? Only if we speak in these terms can an encounter happen.’” Abdoulaye, instead, is the first black lawyer of the Milan Forum. He said, “With this exhibit we also provided an anthropological key to read the phenomenon we are living. This work has had the merit of dissolving a lot of prejudice. What we are doing is projecting a new bridge of hope for the future.” The event concluded with a party: Raymond Bahati, director of the multiethnic choir Elikya, managed to get the whole room to sing and dance—bishops and journalists included—to the tune of a Kiswahili song. 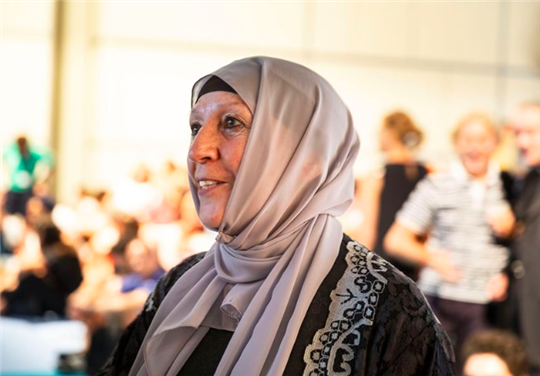 The encounter with Valeria Khadija Collina, mother of Youssef, terrorist in the London attack on August 3, 2017, was another fruit of the “New Generations” exhibit. She talked about her conversion to Islam and the “religious formalism” that, in hindsight, led her son to radicalize. She shared how her pain for the loss of Youssef turned into a new openness. Her encounter with Christian and non-Christian friends at the Meeting is causing an unexpected rebirth in her.

Before the end of the night (which for some concluded with Paolo Cevoli’s show on the Bible, while for others, with the social dinner with the Meeting’s speakers), one last intense talk took place: “In His Twenties He Said ‘Infinity,’” a lesson by poet Davide Rondoni on the occasion of the 200th anniversary of Leopardi’s masterpiece. “And as the wind / Comes through the copses sighing to my ears, / The infinite silence and the passing voice / I must compare: remembering the seasons, / Quiet in dead eternity, and the present, / Living and sounding still.” 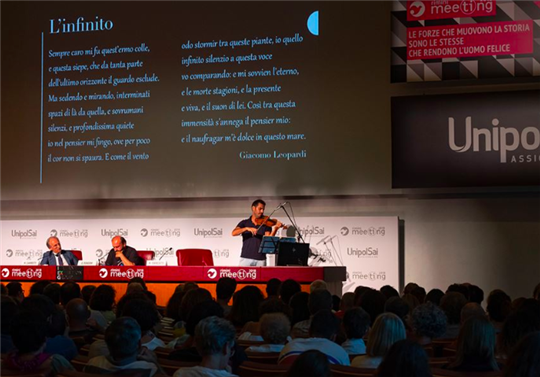 To experience the infinite, said Rondoni, something must unexpectedly burst into in life: the wind. It’s that voice that reached Leopardi’s ears and finally allowed him no longer to fake silences, but perceive—almost touch—that which cannot be thought, but that attracts all of man’s desire.