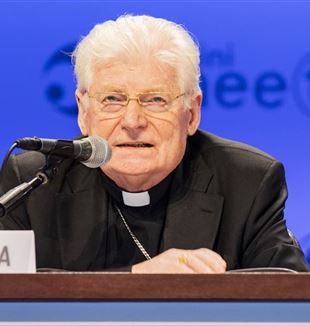 In the sport exhibit, "Enjoy the Game," built by passionate twenty-year-olds, there’s a touching video on Jesse Owens with words taken from his autobiography. On the day of days (May 25, 1934), the champion of color beat four world records, but he was victim of racial discrimination all his life: when he was a kid he would chase the bus that wouldn’t stop for him because of the color of his skin, and, during the Olympic games that would render him immortal, discrimination got even more intense. Still, he said, “They ask if the injustice upsets me. No. I run because I’m happy. I run because I’m free. I was very successful, but nothing is as valuable as knowing who you are and who the other is.”

His words came to mind when, halfway through the first talk of the day on “Freedom in the Public Space,” jurist Joseph H.H. Weiler delved into dialogue with Sabino Cassese and journalist Alessandro Barbano. They focused on the relationship between the individual and the community, the current excess of rights we are paying the price for, and the need to regain the dimension of obligations. Weiler, however, insisted on a point that, to him, was radical: “Happiness and freedom of a person don’t depend on the freedom we are guaranteed in the public space.” That is, “We have so many examples of people who live under regimes and in countries where their freedom is denied and, yet, are free. And we have an equal amount of people in our society who are recipients of great public freedom, and yet, they are not free, because they are not internally free.” 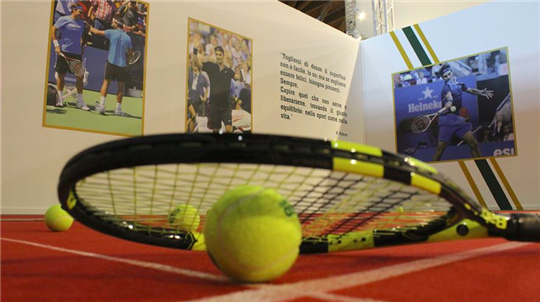 The theme of the “dark side of the Internet,” as Barbana said, is a daily example of this dynamic. “That dark side,” emphasized Weiler, “depends on the individual person and whether or not he is slave of those tools.” Therefore, “it is crucial to guarantee freedom in the public sphere, but this does not in any way guarantee freedom of an individual.” When Cassese re-centered the perspective of obligations to collaborate in “freeing from necessities,” (he referred to healthcare, work, education, and previsions) Weiler answered with the provocation of a wanderer: “The Nordic countries have the perfect system, but the Italians are happier.”

This provocation would have made for an interesting question in yesterday’s episode of “To Be Italian,” which featured entrepreneur Brunello Cucinelli. He had never been so happy to attend the Meeting: “I loved how Violante invited me to speak on the theme of Italianness. We have a great need to begin again from who we are.” The issue of identity, of asking oneself who we are, burst forth in the talk “The Unity of the Person” with Fr. José Clavería, Rector of the Sacred Heart Foundation in Milan, and Pilar Vigil, Chilean physician, member of the Pontific Academy for Life, and president of “Teen Star,” a sexual education program founded in the 80s in the United States by Hannah Klaus. Intertwined in the story of this method and in Vigil’s personal story is the story of the Church, and in particular, of Wanda Półtawska and Saint John Paul II. 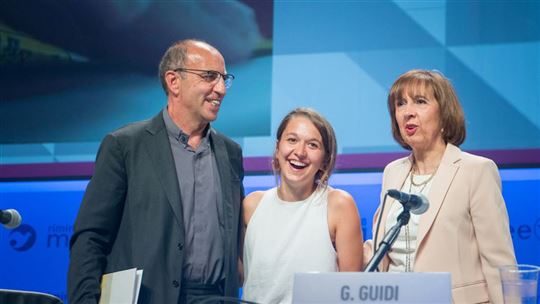 Vigil and Claveria answered questions posed by Giulia, a university student, starting from their experience—they were very open—of what a person is, and from the wonderful risk of accompanying a person in its totality of body and soul, in its physical, biological, psychological, emotional, and affectional dimensions. “’Teen Star’ aims to see the person not as a problem, but as a unique reality that is always in a unique moment in life,” said Vigil who, since childhood, has been fascinated by the mystery of the origin of life and to that she has dedicated all her efforts. Conversation on stage ranged from the drama of a “protected” sexuality that loses its truths before its rebellion to biological limits, to the experience of love and the urgent need for “a pedagogy that is Christian and incarnate.” Listening to Vigil speak opened people’s curiosity toward their humanity. This was due to her freedom looking at humanity “without that veil of shame and timidity,” as Giulia said describing her encounter with Vigil, “that is usually present when speaking of sexuality. It’s an issue that has to do with the most important desire in our lives: loving and being loved.”

Claveria spoke of her experience as an educator and her affective wounds and weaknesses, and offered the audience personal and timely questions, advice, episodes, and provocations. “For a young person to be happy, clarity regarding affectivity is necessary, because it too often gets confused with feelings. This leads to the downfall of relationships, and people are lost and abandoned ‘like broken toys.’” She spoke of sacrifice as part of the culmination of affectivity. “It cannot be avoided. Look for and imitate those who live their relationship with the good of the other at heart.” Pilar added, “Communication does not imply relationship. We have to learn to relate and opt for intimacy. What is true intimacy? The ability to exist in the heart of the other, even though it’s different from my own.” In fact, “there can be intimacy only if there is identity. If I have awareness of who I am, then I can place myself before you without manipulating you.” 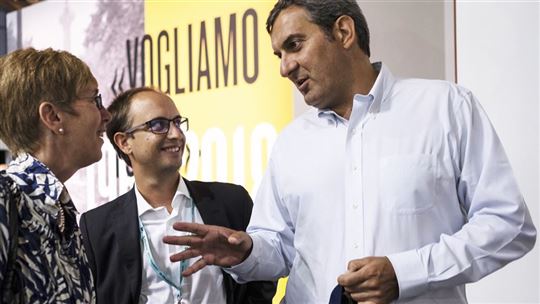 Awareness of reality and of oneself leads to questions such as, “What oppresses me? What liberates me?” These were questions posed by Margherita, one of the university students who worked on the exhibit on ’68. Historian Maria Bocci, one of the curators, placed these questions at the heart of the talk with Mario Calabresi, director of the Italian newspaper La Repubblica. Bocci retraced the year-long work done with the students and her willingness to change perspective following what they found interesting instead. She spoke of the desire for “authenticity” as the key to interpret the exhibit. This desire of students fifty years ago provoked today’s students regarding today’s reality. Looking at ’68, at its “false steps,” its wanting “everything now,” and its rejection of the past which fell into “today’s empty horizons,” students saw “an avalanche of questions” burst forth. Bocci read Margherita’s letter: “Now I often ask myself what changing the world means and how it can be done. I was shocked by how changing the world and losing oneself is not actually changing the world, but it’s a waste of time.” For this reason, with the exhibit, “we did not want to say what we knew about ’68, but we wanted to offer the energy of the challenge then, which was not lost.”

Calabresi remembered Sergio Marchionne and how “bewitched” he had been by the Meeting. “He told me about what he saw: ‘It’s not true that young people no longer have light in their eyes.’” He then talked about the hospital in Uganda that today assists hundreds of births per year. It was born the wedding registry of his aunt who was married in ’69. She and her husband wanted to “change the world and make a difference,” so for their wedding they had people gift them everything necessary to open a maternity room in the heart of Africa.

The effort and struggle for freedom and happiness touched all the talks, one after the other: the “strange case of Moses” with Weiler and Fr. Stefano Alberto, the tale of Aldo Brandirali, and most of all, the beautiful witness of Cardinal Angelo Scola at the presentation of his autobiography, Ho Scommesso Sulla Libertá (I Bet on Freedom), with Alberto Savorana and Luigi Geninazzi. Scola’s story is a crescendo. His experience of faith began “sucking my mother’s milk,” and he totally discovered Christianity “in an encounter” with Giussani and his charism: “That Jesus I had heard so much about and I had talked so much about was now before me, concurrent to me. From then, my life changed.” 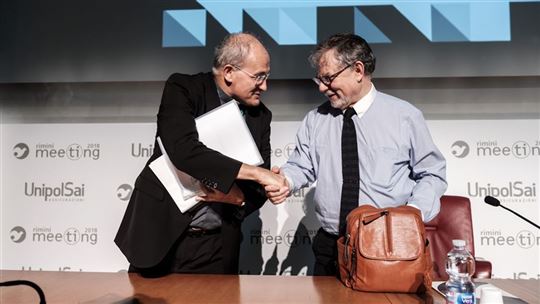 He retraced his life, the long journey of his seize of humility up until today’s awe for the Meeting and “for the durability of the possibility to spark the gusto of the new, of birth: the new in you, in me, among us! I leave a half-day like this one different. Everything God has given me, even the great responsibilities, almost turn to vanity compared to the possibility that the new might regenerate.”

When he faced the theme of freedom, Scola delved to the depths of Jesus’ proposal. “Happiness in life is not given without the daily expansion of freedom, without the fulfillment of freedom. ‘If you follow me, you will be free, truly free.’ That ‘truly’ has within it a radical dispute toward the contempt towards freedom in the history of mankind. It’s a very timely invitation for all of us.” He concluded talking about witness, which he learned visiting the sick and which “is always personal and communal” and towards which there is a duty to publicly manifest it. “However, there is also the duty to read what the historical moment asks of me to the depths, and what is or isn’t proportionate to the path of the irrefutable principle I want to affirm. All with respect to each person’s sensibilities and style.”

For Scola, there is no witness without an objective criterion of historical evaluation and, above all, without a relationship with authority. So, he offered some insights into Communion and Liberation’s reality: “The movement was always able to enjoy Fr. Gius’ unfaltering certainty in the authority of the Church. This was certainly an occasion for flourishing. The fact that today the movement is present in over ninety countries in not a coincidence, but the convenience of authority that allows for the community to gain its depth. It’s never a factor against freedom but one that channels to unity. Without it, no ecclesial reality can have a future.”