“Happiness” may be the last word in the title of the Meeting, but yesterday it was front and center. The meeting is a journey, with the path of Job and the desire for “life and happy days” the Pope mentioned in his message. It’s very fascinating. “But I don’t feel happy. Perhaps happiness is only a break from unhappiness. A man can be lucky, but he can’t be happy.” These words echoed through the main auditorium yesterday morning. Speaking them was Franco Branciaroli in a video introducing a dialogue between Davide Prosperi and Luca Doninelli on Victor Hugo’s Les Miserables. “At the end of the day, considering who Jean Valjean was, it wouldn’t have taken much for his tension to loosen; a happy day, maybe.” Doninelli, writer and author of a stage rendition of the French novel, disagreed. He began with a grand picture, explaining what constitutes a great work of art. “Not a fresco, but a connection with the stars, the expansion of what happens in an instant, the relationship with the universe here and now.” Hugo built a masterpiece with a hero who doesn’t speak and doesn’t triumph, and a story filled with inconvenient digressions. “If there’s anything a writer shouldn’t do, he did it.” Hugo was only interested in his walk of dispossession, his human walk. “It’s a sacred novel written by an anticlerical man.” “It touches the hearts of those who come across it,” said Prosperi, a biochemist and former student of Doninelli. “It’s a masterpiece because it describes man in his most essential layer: desire for goodness and love.” Les Miserables explores a generation of victims of injustice. For Valjean, however, there is something additional: the gesture of Bishop Myriel who not only exculpates him for having stolen his silver, but he gives him more than he had stolen. “He is freed from guilt, but he also discovers a greater freedom.” He never leaves it, until the end, “through a journey of self-awareness that is built upon encounters throughout his life.” 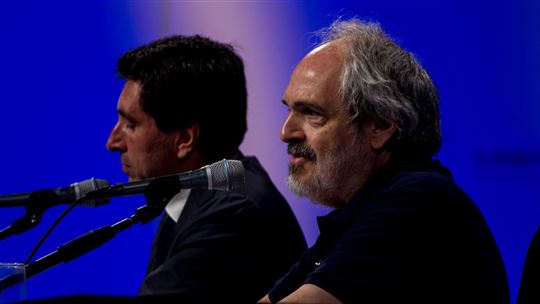 Valjean’s freedom is different from the freedom of those who died in the 1832 rebellions in Hugo’s novel. It’s also different from the freedom in question soon after the talk, in the History Area. After Monday’s talk with Bonisoli, it was no coincidence that yesterday the talk was on Eastern Europe’s Sixty-eight. The discussion was curated by the Christian Russia Foundation with Francesco Braschi, Adriano dell’Asta, and researcher Anna Guglielmi. And again, a different kind of freedom—religious freedom—was discussed in the mock trial with Sabino Cassese, Joseph Weiler, and jurist Francesca Matines. 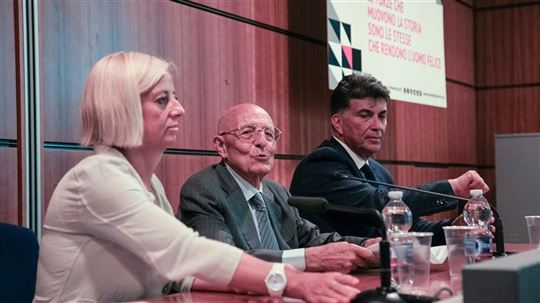 Pope Francis’ message to the Meeting said, “come and see.” Hundreds of people, in fact, came and stood in line to hear two “witnesses of happiness” speak. Veronica Cantero Burroni, an Argentinian disabled sixteen-year-old, has been writing since she was seven and she was recipient of the 2016 Elsa Morante award for her Il Ladro di Ombre (the Shadow Thief). On stage with her was Paola Cigarini, originally from Maranello (“therefore, a Ferrari,” said moderator Giorgio Vittadini), but currently in Salvador de Bahia, Brazil, managing an educational center in the heart of a favela. The talk was an hour of breathlessness. “If one remained seating without trying to get up, he wouldn’t be able to see what’s already on the table in front of him,” said Veronica from her wheelchair in her introductory video. She then spoke from the stage, “It’s possible to be happy. That’s not a question.” It means perceiving oneself embraced, she said, just like the time she met the Pope in an audience. “I waited. I knew there was a chance of seeing him. I had the book with me.” What could she write on the copy she’d give Francis? “’Thanks,’ I thought. But thanks for what? I thought about his speech to the young Cubans, when he talked about seeing life in a different way, with an eye of flesh and an eye of glass. The first eye sees what we look at, the second sees what we dream and desire. Those who don’t dream are closed in on themselves. The ability to desire is the most precious thing.” So, Veronica wrote, “Thank you for teaching me to see with an eye of glass and an eye of flesh.” That is, for teaching her a new way to love reality. She then said, “How can you live without expecting miracles?” Not magic or paranormal activity, but something that happens and “makes you appreciate every detail of this world,” like Jesus’ gift in front of one of several of her spinal surgeries. “I’d call it ‘my friend scalpel.’ I’d ask for the Calvary to end, but He waited until the very end to help me understand this was for me. It was the day before. I suffered, but the gift was understanding and being one with Him, with His cross. It was a miracle. Happiness is not a sky with no storms.” 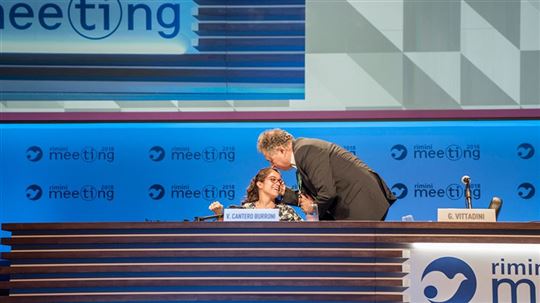 Paola Cigarini followed with the story of her Educational Center John Paul II in a town that is 60% favela. “In our neighborhood we see two murders a day involving kids between 14 and 28 years old, in a metropolis that counts 30 thousand murders a year.” That’s where, since 2000, “thanks to the gratuity of someone who was moved and gave credit to something different, far from calculated, 500 kids from the neighborhood are welcomed in for sports and an after-school program.” Nothing is taken for granted in that reality. “A bed, sleeping with bedsheets, a mother to take care of you, food … Many kids there don’t have any of the daily things we would consider mundane,” she said. Violence is also a growing phenomenon. “Here, everyone has someone in their family who has been murdered.” However, no one touches the educational center, and there are no vigilantes. “Everyone recognizes it as something good, even the ones people are scared of.” Parents see their kids happy, growing and learning. They see them in good shape, finally educated to a positive life perspective educated to dream. “A miracle,” said Vittadini. “The strength man alone does not have. Reality is a miracle. There’s no God to superimpose, He’s already there.” 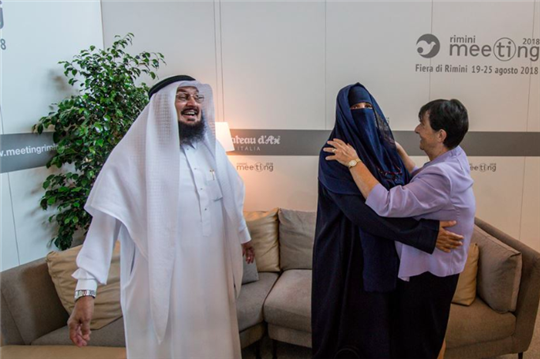 Eyes of glass and desire were also relevant for the group of kids visiting the area dedicated to Exoplanets, the extrasolar planets that for some time scientists have been calling the “life pockets” of the universe. They must have been sixteen, and they admired the model of a telescope that will be assembled on a satellite for an upcoming European Agency space mission. An eye of glass is, in fact, necessary to see the sky that man has been observing since the beginning of time. Several kids and adults surrounded them among plastic models and faux meteors. In another space in the Area, a crowded talk was dedicated to some of the most recent related discoveries.

All the flesh and glass eyes must have been present at the afternoon talk with scientists Enrico Flamini, Alessandro Morbidelli, and Roberto Battiston, president of the Italian Space Agency tied to the French Guyana and involved in the launch of the umpteenth mission. The theme was extraterrestrial life and the three scientists’ job, starting from extrasolar planets. 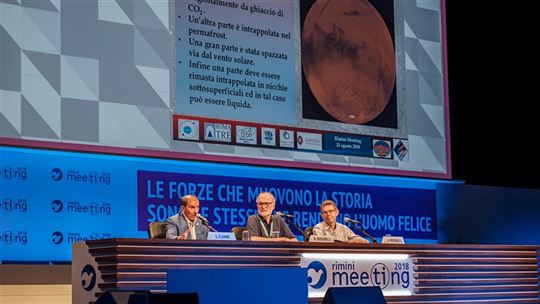 “Up until twenty years ago their existence was unthinkable. We actually thought it was impossible. Today we’re convinced that a star without one is an anomaly. And the universe has hundreds of billions of stars.” They spoke of one discovery after the other with experimental observations. “Made of intuitions, attempts, errors, and successes,” all three of them said, each in his own way. They spoke of the discovery of the underground lake on Mars, news from early August. “It was an Italian discovery, fruit of a project which began in the mid-Nineties, Marsis,” said the scientist. The project used tools that could not have been found on earth if not with computer simulations. “A success.” Morbidelli was almost moved to tears, “as usual,” re-watching a sequence of photographs of four exoplanets surrounding their star. Battiston responded to a question regarding the possibility of extraterrestrial life saying, “The answer is in each one of us. In all of us can’t but resound the question that places us in touch with immensity. It’s part of our nature.” Need for another is part of man, as his colleagues also said: it’s impossible not to ask this question and not to work to find an answer, because man can’t imagine himself alone. 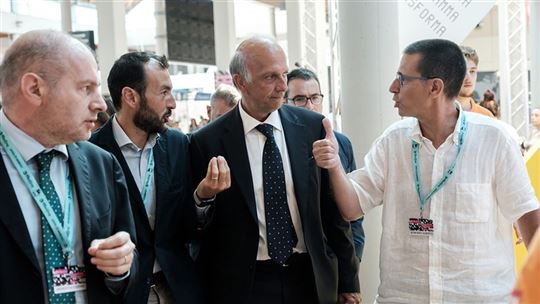 From the stars to school, and even the new minister of Education, Marco Bussetti, came to the Meeting. It was an institutional visit, but it was also fruit of a friendship with Portofranco, a reality he became acquainted with in Milan. He didn’t spare praises about it, “It’s a place where I saw competent people dedicate time, passion, love, and dedication to kids who ask for help and who then reach results. They then come back to give back what they received.” There was no chit-chat: Bussetti answered questions by students, parents, and professors. Regarding teacher evaluations, he said, “Indications regarding what criterion a person is being evaluated based on must be clear. Among these, of course, aspects that a teacher must innately have should be added,” he answered to Marco, a student who told him about a professor who helped him get back into his studies. Regarding professional formation he said that it was born in the Fifties, but today it can be a great opportunity to strengthen bonds with companies. Again, he talked about autonomy and equality saying they are both essential to the Italian school system, and their problematic aspects must be revisited. “Can schooling make us happy?” Asked Alberto Bonfanti, teacher and moderator of the talk. “Yes, if it’s education. That is, if it’s an introduction to reality, as Fr. Giussani would say.” The binomial returned: reality-happiness. “It’s this education that helps each ‘I’ discover this identity, that is, what moves the heart.”