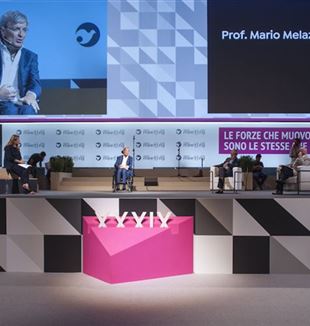 The second day at the Meeting, Filipino cardinal Luis Tagle stuck out when he laughed wholeheartedly and when he was moved during his talk. He came to Rimini after a long and difficult journey from Manila due to flight delays. He was ready to take off for Dublin soon after his contribution alongside Philip Jenkins, the religion historian. While he told the audience about “the Church in this epochal change,” he recounted what he saw at a stoplight in Manila. He was in a car with a friend and their driver who had already turned down solicitations from several poor street vendors who had come out of nowhere and surrounded the cars. After being turned down, they all left. A young boy who was selling cookies went back and called him, “Cardinal! Cardinal!” The driver, again, said, “No.” “I rolled down the window to say hi,” said Tagle. “I told him we weren’t going to buy anything, but he said, ‘I want to give you my cookies as a gift.’ In that moment, a new Church flashed before my eyes and showed me the power of the lowly.” And he went on this way, recounting the thousands of ways “the eternal Gospel is announced,” like the time it happened through a shirt. One evening, he met a group of young kids and, after talking with them, they asked him to sing, to take selfies with them, and to autograph their shirts like a rockstar. “That evening was a mystery to me. I did not understand what had happened. The answer came to me a year later.” He met one of those kids again, who told him he kept the autographed shirt under his pillow every night. “I haven’t seen my father in years, but with that shirt, I know I have a family in the Church and, in you, I have a father.” With tears in his eyes, Tagle said, “So many kids are looking for a father!” He claims we need a presence that can accompany one’s life, especially today, in this “moment of historical shift” in which the Church is called to be a big table with room for everybody. “[A place] where those who have nothing to eat and no one to eat with may sit with dignity,” he said, reminding the audience the urgent need to welcome. After hearing him speak, it was easy to comprehend Jenkin’s confidence when he illustrated data and studies on unexpected perspectives in the future of the Church. He said, “Can Christianity disappear? No. Christianity is always dying and always being reborn. The Resurrection is part of its history. It’s not theological doctrine, but a historical fact. In China, Christianity died four times and it resurrected stronger than before.” 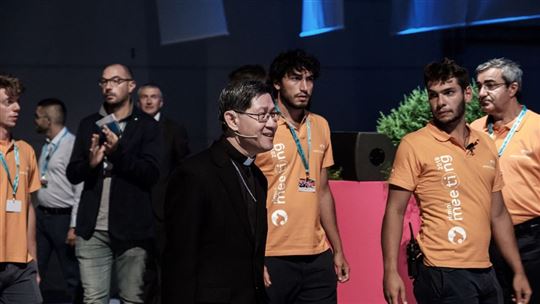 Listening to them, one can see some of the same paths traced during the first talk of the day on the thought of Bergoglio. Massimo Borghesi, Rocco Buttiglione, Guzmán Carriquiry, and Austen Ivereigh responded to the questions of Alejandro Bonet (curator of the exhibit on Pope Franics) from various perspectives: “What does Francis as a historical event mean for the Church and the world? Where does a man like that come from? Why does he speak like this? Why does he do things that leave us amazed?” In everyone’s comments, the gaze on Bergoglio was a call to a personal conversion and to the conversion of the Church. It was a way to better discover the path on which he is leading us “in this upside-down world,” as Ivereigh said. The British scholar—who, according to Bonet, “helped us Argentinians have a gaze that isn’t ideological”—took the audience through Bergoglio’s writings from the Eighties, the so-called “Chilean encyclical,” his speech in Santiago del Chile last January, and his letters to the whole Church in this time of crisis and abuses.

The underlying theme was the danger and the internal temptation of the Church to “confine itself,” to close itself into its “winter palaces” to feel safe and protected. The Pope warns us against the “strategy of resistance,” as Borghesi defined it, against intellectual deviations, defensive moralism, and “a thought that is linear, stifled, and static, where there’s no room for awe, and that proceeds in the opposite direction of grace, which is received as pure gift. A thought that is in tension, instead, expresses a conscience that is begging.” The Chilean case is specific but emblematic, said Ivereigh, “Instead of discerning, we lament and condemn. The good news is, accusing oneself leads to humiliation and to the possibility of encountering God in mercy. It is like Peter who, after being forgiven by Jesus, went from being desponded to being an apostle. He stopped focusing on himself and his persecutors and moved his focus to Christ: only by re-centering ourselves on Christ can we evangelize." 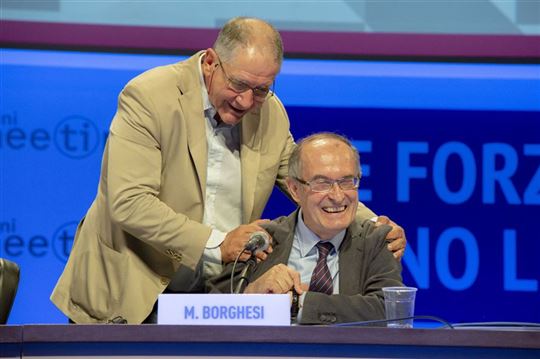 The second day of the Meeting proceeded, filled with talks and powerful witnesses. The former Red Brigades member Franco Bonisoli loyally and painfully described the deceits of ideology, the authentic desire to change the world, and the ways of armed struggles. “Choosing collision is a spiral that's hard to come back from. We never went anywhere. Violence only brought more violence, and it dehumanized us,” he said, his voice cracking. “But I was lucky to be able to leave, and that’s why I’m here to talk about it today.” Justice was once again protagonist with Giovanni Legnini, vice-president of the Superior Council of Magistracy. Politics, instead, was a hot topic with an overview of the work done by the Subsidiarity Intergroup (which two hundred deputies and senators have already joined), and in contributions by Graziano Del Rio, Maurizio Lupi, Mariastella Gelmini, Massimiliano Romeo, Gabriele Toccafondi, and the undersecretary of the Council Presidency, Gianluca Giorgetti. The latter spoke about the importance of passing “from society to community,” and accused the overuse of political correctness to have generated “the populist reaction that is even overshadowing democracy.” He then emphasized the word “happiness” in this year’s title. “It’s risky not to pair the word up with ‘freedom.’ As Dostoevsky taught us, if the people must choose between happiness and freedom, they will choose the latter, but we know how dangerous that can be…” Giorgio Vittadini responded pointing to educational urgency and to the kind of happiness that “doesn’t imply doing whatever we please, but the heart’s uncomfortable and insatiable desire,” without which politics is ruined. “The risk of power must be acknowledged. Everybody runs it, even we do. We have no doubts about the government, but it must be made clear that everyone runs the same risk those preceding them did.”

The Meeting title was seen on stage last evening at the Novelli Theater, through a play by Farhad Bitani, L’ultimo Lenzuolo Bianco (The Last White Sheet). It’s the story of a man whose heart and thought radically change thanks to simple gestures of humanity, and he becomes a force that moves the world in the encounter between the West and the East, Islam and Christianity. First, however, in the afternoon life at the Meeting nearly paused to follow the dialogue on Job (connected to the exhibit, “Is There Someone Hearing My Cry?”) featuring Fr. Julián Carrón and the secular philosopher Salvatore Natoli, and moderated by Monica Maggioni. 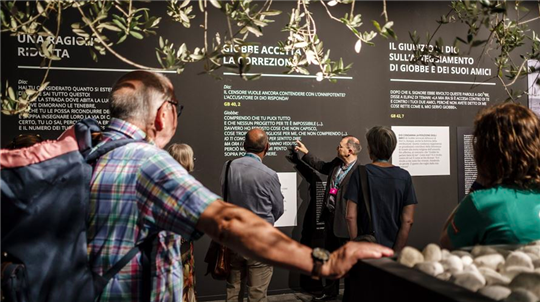 Natoli summarized Job’s position as a just man before the mystery of suffering, living that mystery within an alliance with God. “Job says, ‘I respected the law, so are You not faithful to Your word? But before I reject You, I’ll call on You to tell me why. Because, despite everything, I don’t want to lose You.’ Job doesn’t follow his wife’s advice to curse God. ‘I want to know why, because without God who saves, I’d be lost anyway.’” The two intense hours of conversation attempted to “open some creases in an abysmal text.” This was done looking at Judaism and modern times through witnesses, photographs, words—like texts by Zvi Kolitz and Elie Wiesel, the “moments that assassinated the soul” in Auschwitz, and Mario Luzi and Eugenio Montale—and poignant songs sung by a Syrian woman, Mirna Kassis. Everything and everyone on stage communicated that “Job is one of us.” His cry and his question, as Carrón says, “is not erased from the good presence the people of Israel were able to experience. The question becomes suppressed if this presence is denied, if the suspicion of God as the culprit prevails, when He can actually be a companion with which to face our pain. He can determine the way we face the mystery of suffering, as was the case for centuries in Hebrew and Christian history.”

It was the same for Mario Melazzini, a physician who was paralyzed by a neurodegenerative disease, who told his story from the stage: the aggressive diagnosis, his desire to be euthanized at a Swiss clinic, a Jesuit friend who gifted him a Bible with a bookmark in the book of Job, and the companionship of this man in his human drama. In the end, like Job, he was able to say, “My ears had heard you, but now my eyes have seen you.”

Nothing about this comes naturally, because “pain challenges both reason and freedom,” as Carrón said. God’s answer is silent, different from what we would expect. “It’s not an explanation, it’s a Presence,” the grandeur of being, of creation, of that question that echoed among the panels of the exhibit (“Who fathers the drops of dew?”), and of divine company, so intimate and bodily, that filled Etty Hillesum’s eyes with tears as she looked at the sky with her feet on the ground in a concertation camp. She made of her life an “uninterrupted dialogue” with God. Carrón concluded citing Claudel, “The question was so enormous that only the Word could face it. The Son of God did not come to annihilate suffering, but to suffer with us. This has been revealed to us not by sparing his Son the pain. The true and only interlocutor of Jesus is the Father. It is a relationship so powerful that evil is defeated: suspicion does not win, familiarity wins to the point of total abandonment. The victory of love brought him to life forever."

The great hope born from the sight of a soul not destroyed by suffering but flourishing in it is evident in the witnesses known to many, and in those known to few, as Francesco said. He is no longer a boy, but he still wears the orange polo and is a second-time volunteer at the Meeting. He comes from a small town in the Veronese, San Giovanni Lupatoto. Last year he came here to work because a dear friend, Fiorenza, had handed over to him her dream: participating to the Meeting as a volunteer. This dream was impossible, due to her illness. “So, two of us, Ivo and I, came to volunteer on her behalf.” They followed Fiorenza’s passionate dream and Fiorenza followed them: “Saying ‘yes’ to my illness helped me live the communion of Saints so much so that I became a ‘volunteer’ at the Meeting through my friends.” After having told people about the beauty they experienced and having presented the Meeting at a happy hour in their town, Francesco and Ivo came back with twelve others this year.