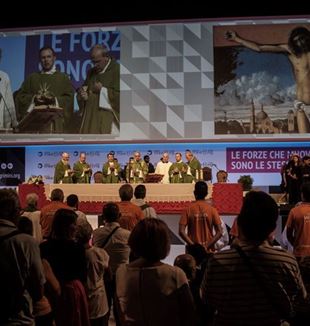 Dreams, desires, revolution, charity, and Italian culture were words that marked the first day of the 2018 Meeting, which kicked off with a reading—before mass celebrated by the bishop of Rimini, Msgr. Francesco Lambiasi—of the message that the Secretary of State of the Holy See, Msgr. Pietro Parolin, sent on behalf of Pope Francis. The cardinal reminded us that “the title of the Meeting revisits an expression by Fr. Giussani and refers to that crucial social shift that occurred around 1968, the effects of which have not yet been exhausted fifty years later.” Today we can see the consequences of that historical shift, but the yearning to see a better world—even if the visions might differ—is not lacking; rightly so. “The Christian cannot give up dreaming that the world may change for the better. It’s reasonable to dream it, because at the root of this certainty is the profound conviction that Christ is the origin of the new world.” It was a beginning marked by the question asked to the first two disciples, John and Andrew: “What are you looking for?” The Holy Father, wrote Parolin, “wishes that this year’s Meeting may be an occasion for all who will participate to delve into or to embrace the Lord Jesus’ invitation to ‘come and see.’” 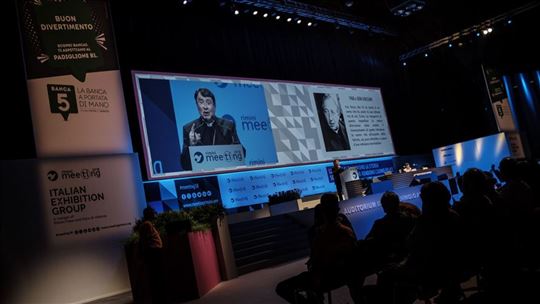 What are the thousands of people at the Meeting looking for? It’s impossible to generalize. Each person has his own story, his own questions. Surely, they will all have plenty of things to see and hear. The first of these, which is worth revisiting, is the response to the tragedy of the Morandi Bridge in Genova. Emilia Guarnieri, president of the Meeting, recalled this event prior to the talk dedicated to this edition’s theme. She asked for a moment of silence. The auditorium went quiet. In that moment Job’s cry echoed. The same cry was featured in one of the main exhibits this year which bravely explores the “enigma of suffering.” The question on the meaning of pain, already present in ancient eras, reaches the modern man, intact, and challenges him: Where was God in Auschwitz? God’s answer to Job, in the exhibit, is supported using the creation scene from Terence Malick’s film, The Tree of Life; the answer is not an argument, but the very existence of the world. The curators of the exhibit said that the answer to the meaning of pain isn’t found in an argument because God, in Jesus, carried it Himself.

This year, the talk on the Meeting’s theme was given by Archbishop Christophe Pierre, Apostolic Nuncio to the United States. In a press conference he answered journalists’ questions about the late sex abuse accusations in the American Church: "All of us bishops, priests, and members of the church must find a real response to the problem. Just a juridical or organizational response will not be enough to avoid evil." Here, Job’s challenge emerges as more relevant than ever.

For Emilia Guarnieri, this meeting’s key word is “desire.” “What can it produce in civil organizations, in economics, in research? Can this search for happiness change history?” But, she also asks, if what brings men together is desire for happiness, what is diversity? “The experience of the Meeting has always seen diversity in action and we have been able to see how this can be a richness.”

Pierre’s talk was centered on the word “revolution.” “The true revolution is the revolution of the heart,” he said. “We cannot force anyone to believe, especially not young people. Jesus did not force the Samaritan woman to believe; rather, he gave her, through dialogue, a chance to pursue her heart’s real desire.” We can all offer those we encounter the possibility to share in the grace we received through the encounter with Christ in the life of the Church. “We communicate this grace through the witness of our life. The world today needs witnesses: parents, educators, politicians, our co-workers and clergy. We need a Church that witnesses to the joy of belonging to Christ. Christ was that Person and is that Person who is so attractive that he helps us connect with our own humanity.” 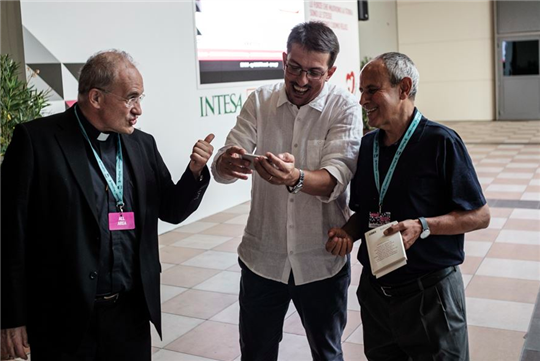 The protagonists of a talk titled “Charity and Science: The Mystery of the Relationship of Cure” were also witnesses to this. They were Andrea Mariani, surgeon and researcher at the Mayo Clinic in Rochester, Roberto Barnabei, president of Italia Longeva, Mariella Enoc, president of the Bambin Gesú in Rome, and Rose Busingye, responsible of the Meeting Point International in Kampala. When he introduced them, Felice Achilli, president of Medicine and the Person, cited the title of another Meeting exhibit: “The First Charity for the Sick is Science,” dedicated to the heart surgeon Giancarlo Rastelli. Mariani immediately affirmed, however, that technical capacities are not enough to produce behavior that will be mindful of the totality of the patient: the generosity that is always present at the beginning of a physician’s vocation must be sustained because, otherwise, it will inevitably falter. The secret, said Mariani, is in a friendship that will call one back to the origin and reason behind the medical work. For Enoc, instead, what can and must change is the gaze physicians and operators have on those who suffer. The secret for her is “stopping, silence, and contemplation of the mystery of suffering.” She told the audience about how Pope Francis, during a visit of over three hours at Bambin Gesú, must have spoken twenty words at most (the exhibit on His Holiness is titled “Gestures and Words). A gaze is also what struck Busingye and what changed the way she stayed with those afflicted by AIDS: the gaze of Fr. Giussani. It was a gaze able to illuminate the infinite value of a life apparently void of meaning. This shocking experience is what the Ugandan nurse re-proposes to the women she treats and encounters. Drugs are not enough if awareness of the value of life is lacking. 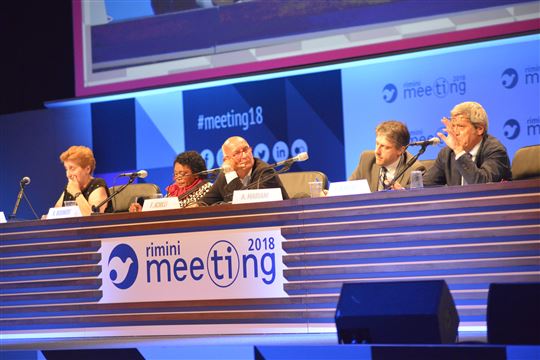 Another great theme that this Meeting is tackling is that of Italian culture. What it mean to be Italian? This is the question at play in a series of talks curated by Luciano Violante, President Emeritus of the Italian Chamber of Deputies. Diego Piacentini, Italian Government Commissioner for the Digital Agenda, was present at the introductory talk. In the introduction, Violante illustrated the richness of the Italian identity, present well before the birth of the national State. Making up this richness are language (Dante, Petrarch, the Sicilian poets at the court of Frederic II), culture (the Asburgo and the Tsars commissioned Italian architects to build their palaces), and the Catholic faith. Violante explained that these three elements overshadow the quote attributed to Massimo D’Azeglio, “Italians are here, but maybe we’re not done building Italy yet.”

The day came to an end with the inaugural performance of Through the Sea of Desire, loosely based on The Satin Slipper by Paul Claudel, which he considered to be his spiritual testament. It was an ambitious feat to summarize a drama with an original running time of eleven hours, but the outcome was successful; the heart of its poetry remained intact. In the play, the love between Donna Prauhèze and Don Rodrigue is intertwined with the colonization of the Americas, the war against the Ottomans, and the developing East. The voice behind the scenes is that of God who says, “A man and a woman look at me and cry. The content and satisfied do not look at me. It is pain that creates that great emptiness in the world for which my constellations have been planted. When earth serves just to separate us, you will find your roots in the sky. Up here, your movements join with mine, which lasts forever.” These are words written in 1929, but they seem to clarify the title of this year's Meeting. 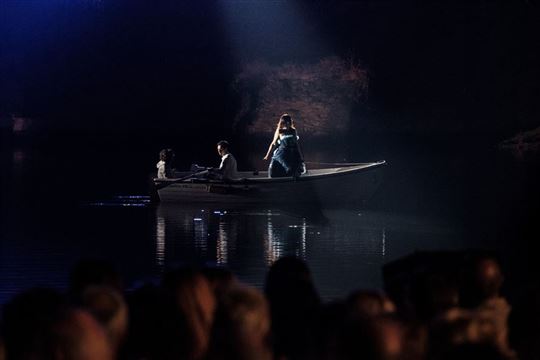