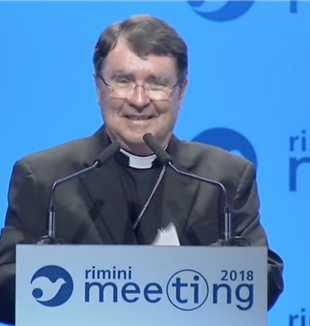 I am very happy to be with you at this year’s Meeting. I thank Emilia Guarnieri, Sandro Ricci, and Marco Aluigi for their kind invitation. Although I am the Apostolic Nuncio to the United States, I speak to you as a friend of the Movement, which I have known well since at least 1991. I come to you also as a pastor, having served the Holy See in various missions, beginning in New Zealand but extending to the different regions of the world, serving as nuncio in Haiti, Uganda, Mexico, and currently in the United States. In my various missions, I have discovered that no matter the country or nationality, no matter the wealth or poverty, many people are searching for happiness – for that which corresponds to the deepest longings of the human heart. They are on a quest to discover the forces that move history, for these are the same that make man happy.

As they search, tremendous changes are happening in the world – drastic changes in culture, technology, the movement of peoples, globalization, and rapid secularization. It has been said by Pope Francis that we live not so much in an epoch of change as in a change of epoch. These changes have made it difficult to hand on the faith to future generations. When faced with change, conflict, relativism, and bleak prospects for the future, people are beginning to despair under the burden of daily life and have forgotten how to be protagonists in history.