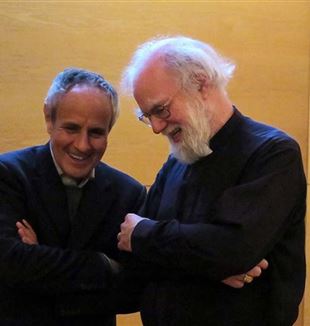 In a sunny England, all absorbed by the splendor of the Royal Wedding, a small and curious crowd gathered in the auditorium of Magdalene College in Cambridge. On stage were Rowan Williams, the writer and theologian who until 2013 was Archbishop of Canterbury (leader of the Anglican Church), and Julián Carrón, author of Disarming Beauty, the book to which the evening owed its origin. A meeting which would reveal itself more like a dialogue between old friends than the usual conference on a collection of essays.

The presentation started with education, one of Williams’ dearest topics. “How is it possible to recover a knowledge-based education, and return joy and meaning to what is often reduced to a mere transfer of information?” “Knowledge is an event,” replied Carrón, introducing what will be the main theme of the evening: “The Mystery did not teach us the truth about love with an essay on eros, but making us experience love within a family. A lot of people are no longer interested in knowledge, simply because they no longer experience it in their life. However, to be able to experience something, we need, firstly, to feel the need for it. The educator’s task in this society is therefore to reawaken the interest for what we want to communicate.” 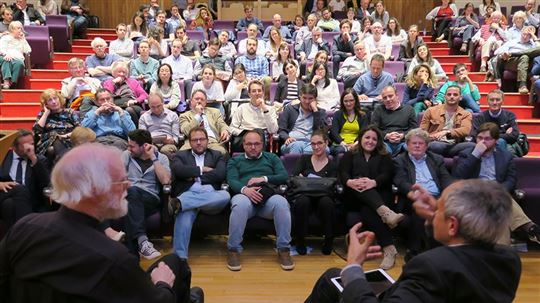 “Everything we need is given to us within a relationship,” explained Williams. “And this is true also for the Christian truth. There is no Christ-truth, without Christ-life. And this is why the real teacher is the one who is able to point the student’s attention towards that life which attracts his own attention. It is not by chance that mystical life is becoming more attractive once again.”

According to Carrón, this dynamic has to do with the history of Salvation as described in the Bible: “At the beginning of human history, it was very clear that we belonged to a Creator, but afterwards we were convinced of the opposite. We have to look at the method chosen by God to re-educate us to this original position, first with the people of Israel and then, above all, with Christ’s incarnation. In fact, only in the encounter with the incarnate Word we can recognise the nature of Truth.” Europeans, he continued, have an intellectualistic mentality, which can be dangerous, leading to “belief that human redemption is possible without a relationship with the origin, a living origin. Without our personal conversion, without personally being involved with the journey we want to propose, we cannot communicate anything.” 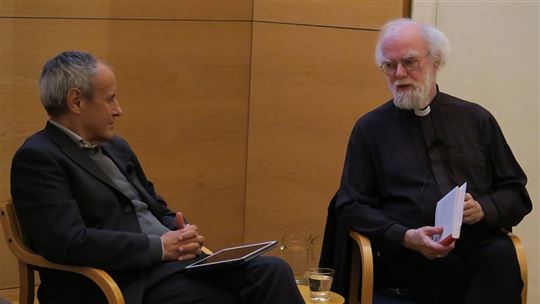 Williams observed that this is particularly relevant for the present liturgical season: “Resurrection and Pentecost are the promise that Christ’s Life is donated to us in the present through the Spirit, in order to rejoice in being God’s creatures. In fact, the world falls apart when we listen to the devil who is telling us that our problem is that we are not God; when, instead, our real problem is to learn to be creatures.”

And this is what God continues to do with all his efforts - educate us to be creatures, added Carrón: “Christ came to generate people who can testify to everyone that being constantly generated is a gift. The (common) mentality in our society reduces freedom to autonomy. This can only be overcome if this relationship with the living Christ becomes crucial for our life. Christianity is often reduced to a series of rules and values, which are no longer able to reawaken any attraction, and this only aggravates secularization. However, as Benedict XVI affirmed, Christianity does still have a chance, because it corresponds to the needs of the human heart. This can only be understood in experience: only when we meet people, in whom the object of their own search is incarnate, can something change. Only in experience can we understand that dependence is the fulfillment of freedom.” 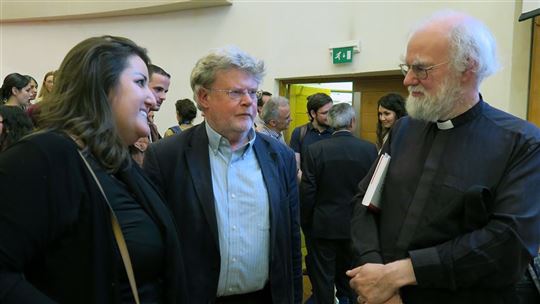 The time was almost up, when Williams invited the audience for a last, quick question. From the back of the room, a woman called Jane stood up. She passionately blamed the Church for not doing enough for the cause of the Palestinian people; and for supporting “ideologists and warmongers” like Donald Trump. The audience murmured, partly because the unexpected question was not exactly an exercise in conciseness. However, what came next surprised everyone, re-affirming the path of the evening, both in content and method.

Carrón fearlessly answered: “Thank you for demonstrating that Christianity reduced to ideology is not attractive. All our effort is aimed at fighting this reduction.” Jane’s reply: “Actually, there is a form of Christianity which has deeply attracted me. I have known people from Communion and Liberation in Cambridge for years and I have seen the gladness with which they live and with which they do charity work in this town. That’s it, I would like that this Christianity could spread, like rings in the water.” “This is our agenda”, concluded Williams, to general applause.
#DisarmingBeauty