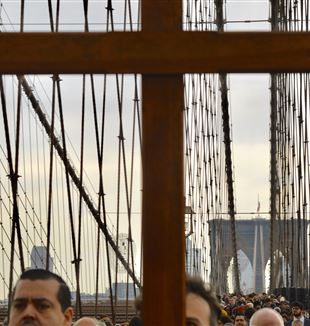 On Good Friday, Christians across the world commemorate Jesus’ journey carrying the Cross through the streets of Jerusalem by engaging in public “Way of the Cross” spectacles. The spectacles we put on in New York City, in my own humble opinion, are exceptional. We New Yorkers have an acute sense of what it means to be a people “on the way.” We are always in transit, whether it be to work, to see someone we love, or to solve some social problem.

So what exactly is at the center of this never-ending commute? And where are we ultimately headed?

Sometimes it seems like New Yorkers are motivated by the allure of ever-greater success, efficiency, and ambition. If you stop and watch us during our morning rush hour commute, you’ll see what I mean. It would be pretty hard to find another city whose inhabitants could top the speed and vigor of our hustle to the workplace. We do whatever it takes to find the fastest route to our destination, and we are willing to put up with the kinds of nuisances that make tourists wish they had chosen a milder vacation spot. So what if someone steps on my feet, blows tobacco smoke in my face, or blasts A$AP Rocky in my ear? As long as I’m at the Columbus Circle 1 train stop with enough time to get a fair-trade espresso at Pret A Manger before class starts, I’m a happy camper.

Though seemingly an individualistic endeavor, the chaos of the morning commute is a sign to me of the city’s heart. We are a passionate people. This same passion drives New Yorkers to dedicate their energy to combatting the many social injustices that plague our city and world at large. The ideals of peace, unity, and equality are written on the hearts and minds of so many people that I’ve encountered throughout my years in and out of the city. 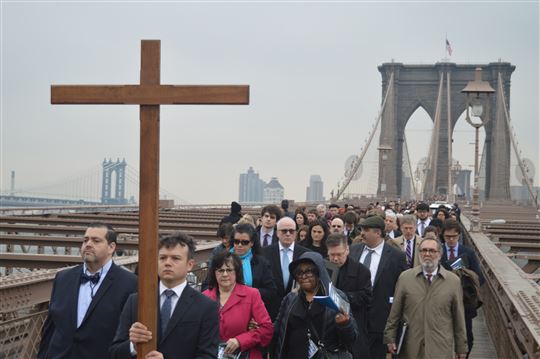 But what does it really take to forge a path toward those ideals? Sadly, I’ve encountered very few people who can offer an authentic and realistic proposal. In the heat of their passion, too many get trapped in the snares of utopian idealism or stifling ideologies that rarely, if ever, touch the ground.

This is precisely why I was so struck by the Way of the Cross procession I attended this past Good Friday. Perhaps the largest of the many processions that occurred on that same day in New York City, it began in downtown Brooklyn, worked its way across the Brooklyn Bridge, and ended eventually in Manhattan’s financial district. Beginning in 1996 with a small group of 30, and continuing annually since then, it now attracts somewhere near 2,000 walkers.

As I walked, I encountered a diverse array of faces in the crowd, ranging across all ethnicities, ages, and socioeconomic statuses; Italians, Colombians, Haitians, Nigerians, Filipinos, WASPs, Dominicans … babies in carriages, grandmas hobbling along with their walkers, young twenty-somethings in sunglasses and skinny jeans … well-to-do couples wearing designer rain jackets, disheveled middle-aged women wearing worn-out shoes, and even homeless people leaving behind their “spots,” “God Bless You” signs and money cups still in hand, to join in with the rest of the crowd as we passed them by.

Of course, a diverse array of people in a given location is not exactly a groundbreaking occurrence in New York City. But what became so clear to me was that we were not just a diverse crowd of people. Rather, we were a diverse crowd of people on the same path, together. We were truly a people. The cries of our hearts sang in unison. And the direction of our gaze was transfixed by the ultimate sign of contradiction: the Cross. 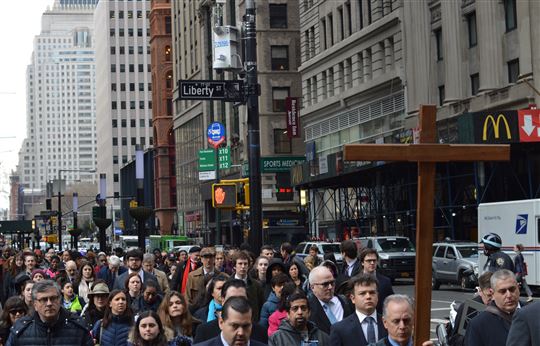 Even in our unitedness, we retained our many differences. We, with our distinct cultural practices, backgrounds, experiences, and political views … with our personal flaws, limitations, and sinful tendencies, experienced a mysterious unity that could only be attributed to Something that transcends any of our own efforts or calculations.

That’s the mystery of the Crucifixion — Christ never promised to eliminate our wounds. Differences, poverty, injustice, and sinfulness remain. Neither a perfect society nor a perfect human race were ever part of the package. Rather, it is through our woundedness that we achieve the type of unity and perfection that Christ promised. It is through our vulnerability, through opening ourselves up to our need for His love, and sharing that need with each other, that our hearts are knit into a single body.

It is only this type of unified body that is capable of facing the injustices, evils, and the general sense of emptiness that have ravaged the social fabric of our nation. I’ve become convinced that no government program, no form of community outreach, no protest, no Instagram hashtag can totally “solve” these problems. We can make progress, sure, but at the end of the day, there will always be more injustices to correct, more homeless people to feed, and new desires going unsatisfied.

The cure for the ills of societal problems begins not in seeking a cure, but rather in discovering something that captures the hearts of all people. In the presence of the people who walked on the Way of the Cross with me, these people whose hearts were captivated by the memory of Christ’s gratuitous act of love, I was reminded of the morning commute, and of the heart of the city. And I was glad, for I know that what the heart longs for indeed exists and is present among us.