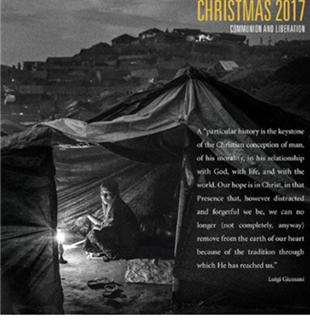 “Realities are more important than ideas” (Evangelii gaudium, 231). There is no greater challenge to our reason, to our human logic, than a fact, a real event. Let us think of the Jewish people in exile, of whom the prophet Isaiah spoke. When everything seemed finished for the Jewish people, when they were in the midst of nothingness, the last thing they would have expected was something that would challenge the defeats they had suffered and the measure with which they judged. They had begun to get accustomed to the situation in which they found themselves. Yet in the midst of the desert, a voice cried out: “I am the Lord, your God” (Is 41:13ff), a voice that pronounced words that nobody would have had the courage to say, so distant were they from human logic: “Do not fear.” How was this possible? How could they not fear when they were lost in the midst of nothingness, in exile?

This is our same reaction in front of present-day challenges. We are assailed by fear, moved to erect walls to protect ourselves. We seek safety in something we build, reasoning according to purely human logic, a logic constantly challenged by God’s words: “I am the Lord. Do not fear!” His otherness appears before our eyes. In fact, that “Do not fear!” is the thing least believed today, the least credible message for us. In front of everything that is happening in the world, who can say they do not fear?


“I am the Lord. Do not fear.” Our reason and our freedom are provoked by this promise, as they were for the people in exile. “Do not fear, you worm Jacob, you maggot Israel.” We, too, are like a worm, a maggot. We feel so small in front of the enormity of our problems. Are we willing to give credence to the announcement of liberation that rings out for us today? “Do not fear. I will help you.”
Commenting on these words, Pope Francis said that Christmas helps us to understand this: “In that manger […] is the great God who is all powerful, but He makes himself small to be close to us and there, He helps us; He promises us things” (Homily at Santa Marta, December 14, 2017). Is there anything more revolutionary for our measure? 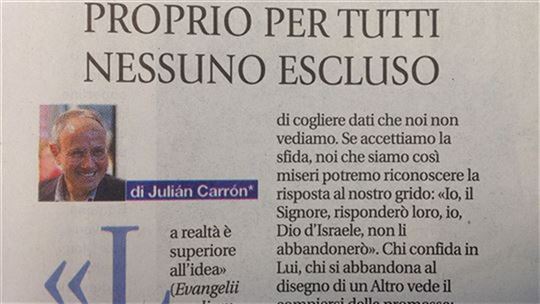 The Lord always surprises us, because He has a different gaze on reality, a true gaze, capable of taking in things we do not see. If we accept the challenge, we who are so wretched will be able to recognize the response to our cry: “I, the Lord, will answer them; I, the God of Israel, will not forsake them.” Those who trust in Him, those who abandon themselves to the design of an Other will see the fulfillment of the promise: “I will open up rivers on the bare heights.” Isn’t this perhaps what amazes us in certain encounters with people? While some people are ever more fearful, ever more drawn in on themselves, ever more closed, ever more discouraged, others blossom and testify to a different, positive way of living the usual things.

Why is it that some people shine with life and others find in every circumstance only a confirmation of their skepticism? The reason is that everything passes through the fine blade of freedom. “I will turn the desert into a marshland, and the dry ground into springs of water.” If we respond to the Lord’s call, we will be able to see life blossom in this arid land, in our historical situation – not in another one, but in this one. “I will plant in the desert the cedar, acacia, myrtle and olive; I will set in the wasteland the cypress, together with the plane tree and the pine.” Those who trust this promise will begin to take hold of their lives and really live them. And yet a question worms its way into us: could the Lord not spare us these unfavorable circumstances that we have to face? We do not understand that certain situations are the fruit of our misuse of freedom. Israel did not trust in the Lord and His word, but preferred to form alliances with the great powers of the time, and ended up in exile. Instead, those who entrust themselves to the Lord begin to see the signs of Him in action: God works in history “that all may see and know, observe and understand, that the hand of the Lord has done this, the Holy One of Israel has created it.”

Those who do not entrust themselves to Him will not see it, because the world will be ever more full of frightening contradictions, but in those who welcome Jesus, life will begin to shine. Those who acknowledge Him start to see the beginnings of a life that blossoms. It is necessary to be simple, as was said by the Jesus who comes at Christmas: “Among those born of women, there has been none greater than John the Baptist; yet the least in the kingdom of heaven is greater than he” (Mt 11:11). For two thousand years, the announcement of salvation, as unthinkable for the human mind as it is real, has been for everyone. It is within everyone’s reach, no one excluded.

Julián Carrón
President of the Fraternity of Communion and Liberation