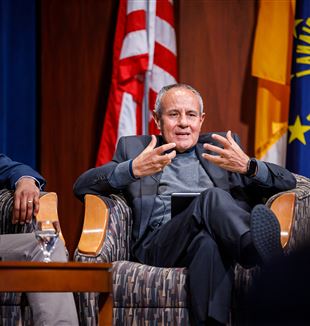 “Only for courageous people,” Julián Carrón said repeatedly to his fellow adventurers on the American book tour for his first book, Disarming Beauty. We traveled with him for eight days, starting at the University of Notre Dame on October 9th, then on to Denver, Houston, New York, Montreal, and Washington D.C. Afternoons and evenings were devoted to public and private gatherings, while mornings were spent flying–about three thousand miles total. The seven public events hosted fifteen speakers and over 1,500 attendees total, among them many friends and colleagues.

The first encounter was at the University of Notre Dame with a group of students who had been reading Disarming Beauty in their apologetics course. The gathering was a paradigm for the days that followed. The first question came from a young woman: “Your definition of freedom is very different from the world’s definition. I was wondering if you could elaborate on how to educate yourself to be truly free in your sense.” “My dictionary is no different from yours,” Carrón responded. “In order to understand it, you have to start from your experience. Looking at your experience, when have you felt free?” That was Carrón’s first of many invitations to engage in an adventure that is “only for courageous people.”

During the tour, the leader of Communion and Liberation spoke with individuals from various professional backgrounds–among them scientists, journalists, university professors, and priests–as well as different faiths including Baptists, Muslims, Catholics, Jews, and atheists. The topics discussed varied as well, ranging from freedom to the event, from dialogue to authority. Carrón, however, always founded his words on one constant: experience. His speech and way of dialoguing were disarmed and, at the same time, profoundly disarming.

The public event at Notre Dame featured The New York Times columnist Ross Douthat and the director of Notre Dame’s Center for Literacy Education, Ernest Morrell, as speakers, and Professor of Law Paolo Carozza as moderator. Douthat highlighted the “moment in which people realize they aren’t self-sufficient” and Morrell chose to emphasize the importance of not yielding to the temptation “to externalize problems, as often happens, but instead to look at yourself.” Both speakers found that the book touched the heart of these issues.

The following day we arrived in Denver. Involved in that evening’s panel at The Denver Press Club were Curtis Martin, founder and CEO of FOCUS, and Professor of Philosophy Michael Huemer, an anarchist and atheist. Prior to the roundtable, the speakers had a chance to mingle among themselves. This began somewhat awkwardly, as they did not know each other, but after the first exchanges they loosened up and started talking about their lives and interests. What followed were twenty minutes of lively conversation they almost reluctantly had to interrupt to begin the panel. This pre-meeting, however, sowed the seeds that completely changed the event.

That night, the meeting room was filled to capacity, with about sixty people standing in the back. Many young people silently waited for the speakers to begin. After a brief introduction, Huemer, who had prepared a fifteen-minute talk dedicated to the chapter on education, cut his prepared speech down to four minutes to leave more time for dialogue. Martin opened his remarks expressing surprise–“I will say, in our discussion downstairs I was actually quite surprised at our starting points in some cases. You try to figure out where a European priest who runs an enormously successful and vibrant community of Christian believers and an older philosophy professor from CU might overlap and you have no idea where it’s going to start”–and asking to resume the conversation they had begun in the pre-meeting. The panelists dialogued with Carrón on many topics, among which were knowledge of reality, authority, and morality.

The conversation became heated as they discussed the role authority plays in the context of knowledge. As usual, Carrón started from experience, using falling in love as an example. “You don’t fall in love by taking a university course or following best practices for a marriage. These things are not enough. Falling in love is an event. It happens. It surprises you. It doesn’t require preparation.” To tackle the topic of authority, Carrón made use of another example. “In the case of illness, I’m the final judge of whether I’m better or not. I can recognize it without anyone else telling me. If the doctor tells me I’m healed, but I’m still sick, even if she’s a Nobel Prize winner, who knows better, me or her?” Following this example, he emphasized that the dignity of the “I” lies precisely in “being able to recognize what is true and beautiful.”

Finally, Martin asked for an explanation of the Christian event, observing that a certain “insistence on morality” is needed in any case–a topic touched on often by various speakers on the tour. After the panel discussion was over, many young people were eager to ask questions, wanting the dialogue to continue.

The third day, like the first two, began with a morning flight, this time traversing over a thousand miles and ending in Houston, TX. That evening at the University of St. Thomas with the author were Mauro Ferrari, director of the Methodist Hospital and Research Institute, filmmaker and anthropologist Marlon Hall, Professor of English Louis Markos, and M.J. Khan, President of the Islamic Society of Greater Houston.

The event opened with greetings from the University of St. Thomas provost, Dominic Aquila. Then Ferrari, a man with a painful backstory (see Traces, n. 10/2010), stood up and said, “I need to ask a question. Because, of course, all of the pain and death that I see around me, that I experience every day is a growing burden, an incredible burden, a tragedy. […] Can you help me through the perspective that you’re bringing forth through this wonderful book? Can you help me make peace with pain and death and evil in others?”

A conversation about scientific reasoning and its inability to explain everything took off from Ferrari’s question, delving into the meaning of having to accept this reality to the point of becoming open to other explanations beyond those that are humanly “comprehensible.”

Among other personal and lively questions was one posed by Khan, who almost timidly asked why he experiences sadness in the presence of trouble even though he is a man of faith. "God loves the freedom of the human person,” responded Carrón. “He desires the person to be the one who decides to love and acknowledge His love. It can’t happen automatically.”

The roundtable concluded with an unusual speech from Marlon Hall. “Amen, brother! Amen! What I love about your book and what it does to invite us into a Christ-like life is counterintuitive to the progression of the religious world, particularly the Christian Church. We have recently in the Christian Church domesticated people’s talents and gifts, when really the opportunity as a human being to follow Jesus and to know God’s presence is to recognize that life is far more barbaric than it is domesticated when we follow the Mystery.[…] So I just want to celebrate. You are a barbarian after my own heart!”

After the panel, as many swarmed Carrón and the speakers with questions, a University administrator said, “We have a lot of gatherings to foster interreligious dialogue. But usually the Muslim speaks and says, ‘I see things this way,’ then the Baptist says, ‘instead, I see it this other way,’ etc. But this evening was different. I saw five men talking with each other as men.”

The following day we headed to New York, traveling 1,400 miles to participate in “The Other is a Good for Me,” a dialogue at the United Nations Headquarters on the positive impact of religious dialogue in facing the social problems of our time. Participating with Carrón were the Apostolic Nuncio to the UN, Archbishop Bernardito Auza, Jewish sociologist Amitai Etzioni, the ambassadors of Indonesia and the Philippines to the UN, and Notre Dame’s Carozza as moderator.

Here, too, the dialogue touched on themes of the “event” and on morality. Etzioni was particularly interested in Disarming Beauty and emphasized that the book “enables us to have a language suitable for facing the problems of current society.”

That same evening, Carrón gave a lecture at the Sheen Center in honor of the inauguration of the Albacete Forum; there were nearly 300 attendees.

On the sixth day, we flew to Montreal, Canada, for another roundtable. This time, accompanying Carrón was Anne Leahy, former Canadian ambassador to the Holy See, and lawyer Mark Phillips. The dialogue served as yet another example of the challenge: “Yes, what you said about love is beautiful, but...” It was another true and deep dialogue.

Sunday morning we arrived in Washington for the final gathering. That night at Georgetown University, Carrón conversed with the Apostolic Nuncio to the United States, Archbishop Christophe Pierre, moderated by John Carr, director of Georgetown’s Initiative on Catholic Social Thought and Public Life.

Archbishop Pierre encouraged everyone to buy and read Disarming Beauty. He explained, “I read it first in Italian and then in English. It talks about important things for my life. It helps us to understand the epochal change we are going through, and to understand and love Pope Francis.”

After eight days filled with encounters and events, four words remained: event, dialogue, authority, and freedom. They all refer to the reawakening of the “I” and the nature of Christianity, but with special emphasis on “event,” a word that emerged clearly in many moments during the tour.

Either the event is something that continually reawakens the “I” and educates it to know reality and relate with God now, as Carrón continually insists, or it simply remains a preparatory moment, a fact that perhaps lead us to change, but that remains isolated from the present. This is a subtle difference, but a crucial one, because in the latter sense, life returns to being a product of our efforts, of “morality” and rules.

While Carrón was on tour, Rod Dreher, the proponent of the highly debated Benedict Option (Catholics have lost the culture war and should, therefore, withdraw into isolated environments to strengthen their faith and prepare their return to the world), published an article objecting that proposing the faith as Carrón would have it (and with him, Pope Francis) means that, “you need a solid formation and spiritual practices that give discipline to your everyday life. Without this, the ‘Francis Option’ is only emotivism.” Because of the temptation to follow rules and “morality,” Carrón’s example of falling in love was the point of reference for many conversations, as well as the example that most struck and surprised people that week. “You don’t fall in love by studying or following certain rules,” Carrón often reminded his listeners. “But if you are in love, it comes naturally to behave in a certain way, to pay attention to certain things, like taking care of the house, things, and the other person. It’s not an effort of will.” Morality arises from this, from the attraction and desire to remain in the event. We cannot fabricate this. This is quite a challenge, above all in America, but it is an adventure “only for courageous people,” isn’t it?