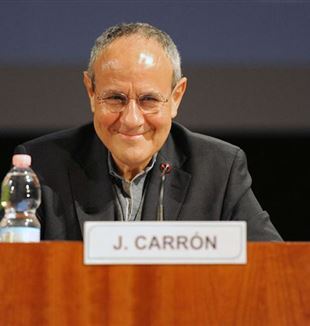 Disarming Beauty had only just arrived in America when it began to discard the usual categories associated with faith in the contemporary world. The English edition of Julián Carrón's book has been published at a time when public dialogue about the pertinence of faith in everyday life is enflamed. Within a few years a series of social, political and juridical changes have transformed a "nation with the soul of a church," as G.K. Chesterton called it a century ago, into the outpost of the post-Christian world. In the epochal "crumbling of evidence" about which Carrón speaks, America is a step ahead of the rest of the West.

This apparently dire socio-cultural context make Carrón's message of freedom and optimism so much more striking. Catholic News Agency observes that "in response to the decreased influence of Christianity in a secularized culture, [Carrón] makes a provoking declaration: in reality, this is a great moment for the Church." The agency, in an interview with the author, underlines the fact that Carrón sets himself apart by insisting on the opportunity for verifying the faith that this phase of modernity offers. "The fact that the Church is no longer a 'moral majority' is freeing; it permits us to rediscover the heart of the Christian event," Carrón said in an interview with Marianne Medlin and Perry West. (The term "moral majority" refers to a politically-motivated religious movement founded by Baptist minister Jerry Falwell in the late 1970s.)

In an article in America, the American Jesuit magazine, Jason Blakely further emphasizes this freedom. "Secularization is not the enemy of Christianity," writes Blakely, "but an historic opportunity for the Church to live her witness in an authentic and disarming way. But Carrón also specifies that the individual freedom defended by secularized democracies is not simply a necessary inconvenience for avoiding the temptation of hegemony. In the Christian perspective, 'freedom is the great gift Heaven has given to men.'"

The radical challenge that emerges in Carrón's work is possibly even more pertinent in the U.S. than in Europe. Laws and decrees on life, marriage, religious liberty and education have sanctioned decades-long cultural shifts, artificially forcing a rich and diverse expression of Christianity into two reductionist categories: assimilation or immoveable resistance. Even the political division between "progressive" Christians and "conservatives," long a popular reductionist distinction, seems to have lost its significance. The anomalous election of President Donald Trump, who saw massive support from Evangelicals and the votes of a majority of Catholics, has further complicated things.

The coordinates and fault lines have changed. The culture war, the battle launched in the 1990s as a contrast to the secular order, seems irremediably lost, and many Christian intellectuals cannot avoid asking themselves about the place of faith in society. Disarming Beauty finds itself in dialogue with authors who in different ways lament the marginalization of the experience of faith, and who offer ideas, sometimes even militant strategies, to take up the battle again or at least to sign an honorable ceasefire.

But the beauty of which Carrón speaks, because it is unarmed, is not equipped for a cultural or ideological confrontation. It invites us to rediscover the true nature of faith and of the human structure, emptied out by what Giussani called the "Chernobyl effect." In this sense, the deterioration of structures that traditionally dictated a way of life inspired by Christian values (a deterioration that happened with particular speed and force in America) is for Carrón the occasion to relaunch the verification of the faith, not to negotiate the terms of surrender.

This change of perspective has struck the imagination of American observers in a debate marked by dark tones and professions of faith completely detached from the world. There has not been a review, commentary or interview about Disarming Beauty that has not underlined the "optimism" to which Carrón's perspective bears witness. Where many see only signs of decline in the world that up until recently was called Christian, he sees the opportunity for a radical recovery of the faith, a faith that had largely been reduced to structures, rituals, values and social habits, that is, to an ethical scheme or to cultural and political agendas. The coming of new structures was enough to throw away the old ones. 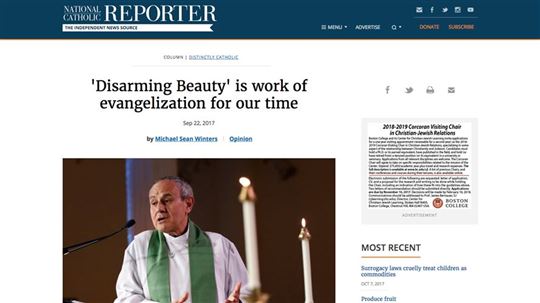 In a long interview with John Allen, a prominent American reporter on Catholic and Vatican affairs, Carrón defined himself as "completely optimistic" and said that his positivity is born "from the very nature of the faith. … It does not depend on my reading of things, from my diagnosis of the sociological situation. The problem is being able to start again from an absolutely original point of departure, from what Jesus said and did." The advancement of the human desert puts today's man in an advantageous position for grasping the profundity of the crisis in action and for judging if Christianity offers any adequate responses.

"If we do not respond to the real needs of the human person, reawakening people's capacity to find the meaning that makes life livable, it is inevitable that we will not respond to the real nature of the crisis. Its roots are in the reduction of what it means to be human beings. Therefore, I am optimistic: I am convinced that Christianity can offer its greatest contribution precisely in this situation," says Carrón.

The dimension of witness, opposed to militancy, and the attractive capacity of Christianity, which has no other need than the "event" of Christ to communicate itself to men in every time, opens a crack in the American mindset, where the religious and civil were superimposed and mixed from the beginning, and where sometimes faith has been reduced to serve the project of secularized modernity. The only alternative for those who are opposed to this subordination is to flee, the strategic retreat to the margins of lay society, in search of spaces of freedom. This would necessarily be a circumscribed and guarded freedom.

The most influential book among those that feel the need to retreat to save a threatened faith is The Benedict Option, by the journalist and intellectual Rod Dreher. Dreher proposes the abandonment of the culture war, which has been definitively lost, in order to build arks with which to face the great flood of the world, waiting until the waters recede. He speaks about forming intentional communities that defend the religious experience from a hostile world.

Dreher's perspective, which for years has reflected on this type of retreat based on the monastic model, has fascinated tens of thousands of American Christians from every confession, but some observers put Disarming Beauty directly in opposition to The Benedict Option. As Blakely writes: "Christians do not evangelize by pulling back, but by tightening friendships. Chapter after chapter, Carrón insists that Christianity did not begin as a moral system or as an assent to dogmatic precepts, but with Jesus, who offered His companionship." At the origin of all this is a presence, the rest is a consequence-even in the Country that is at the same time the most religious and the most secular in the world.