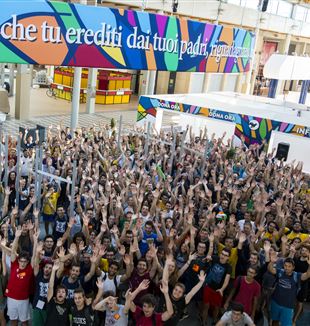 "Very beautiful. People who are sincere and trying to do something different. The Italy of diversity and variety. This is the new face of Italy." This is the WhatsApp message sent at the end of the day yesterday by the Director of the Bibliotheca Alexandrina, Mostafa El Feki. A message that responds, from a distance, to Olivier Roy's observation that, "There's a need to open up new spaces for spirituality in Europe," as an answer to the nihilism that generates violence. Or, as the Vatican Secretary of State Cardinal Pietro Parolin reiterated today, "precisely at a time like this, when humanity is awash in violence, threats, fear and injustice, dialogue is the only strategy we can adopt. And the Church cannot fail to incarnate this strategy in word, message, entreaty and conversation."

This was the heart of the 2017 edition of the Meeting for Friendship Amongst Peoples, which took place from August 20-26 at the Rimini Convention Center. A Meeting that sought to reclaim the inheritance of its 38-year history, not with simple formulas, but with curiosity, patient encounters with others, attentiveness to diversity, and going deeper into the hot topics of the day. Including, for example, employment, in the exhibitions "Every man to his work" and "So that all may exist;" and the exhibits on contemporary art, the Custody of the Holy Land and on the "second generation" of children of immigrants. Focusing, once again, on the crisis, interpreting it in its many facets - thanks to the contribution from Luca Violante - as an opportunity for rebirth. As well as the performances that opened up new frontiers, such as the collaboration with the China National Opera House for "Madame Butterfly" and the original productions, "Father and Son," and "A Shock to the Heart."

You could say that, for the Rimini Meeting, 2017 was the year of a commitment to peace. This was the underlying theme of the witnesses from Israel, Egypt and Venezuela; from Jerusalem with the witness of the Custos of the Holy Land, Fr. Francesco Patton; as well as of the prayers raised together, each in his or her own form, by people of varying religions in the space dedicated to the friendship between Father. Giussani and the Buddhist monk Shodo Habukawa. Peace was on the lips of the nuncio to Syria, Cardinal Mario Zenari, as well as of the Director of the Bibliotheca Alexandrina, Mostafa El Feki, Monica Maggioni (who, with Paolo Magri, conceived of the "Walls" area of this Meeting) and President of the European Parliament Antonio Tajani. And NATO Secretary General Jens Stoltenberg wanted to underline that, "the world could really use a healthy dose of the spirit of the Rimini Meeting right now."

This edition, opened by a speech from Prime Minister Paolo Gentiloni, and described with a rousing address on its title by Apostolic Administrator to Jerusalem Pierbattista Pizzaballa, had front row seats to the Vatican Secretary of State's recent visit to Russia. The protagonists of that event, Metropolitan Hilarion and Cardinal Parolin, spoke in the main conference hall in Rimini on Thursday August 24 and Saturday August 26, respectively.

What was the secret of the 2017 Meeting? You could find it already in the words Pope Francis wrote in his message signed on August 20: "We do not have spaces to defend because Christ's love knows no insurmountable limitations." There's nothing to defend because those leading the way are "trustworthy witnesses;" not those who offer ready-made answers, but those who help us to, "keep our eyes open to the many signs, more or less explicit, of the need for God as the ultimate meaning in life, so as to be able to offer to people a living response."

"I want to underline this last adjective the Pope uses," comments Emilia Guarnieri, President of the Meeting for Friendship Amongst Peoples Foundation, "because any response that is not living, that does not point out the road step by step and become a companionship of men and women together despite their differences, has nothing to say in today's world. This is why the attention to young people called for by President Mattarella in his message to the Meeting did not devolve into the usual trite discourse on Millennials, but instead led to new initiative on the part of our youth."

The title of the 39th edition of the Meeting for friendship amongst peoples, which will take place in the Rimini Convention Center from August 19-25, 2018, will be "The forces that move history are the same that make man happy."