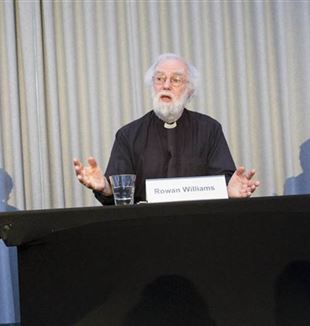 Saturday, June 17, in the heart of a strangely sunny London, a community of men and women, many of whom are foreigners, gather in a conference center for a day of dialogue on a very unexpected theme. The title of the fourth edition of the London Encounter, "The Adventure of the Unexpected," could have sounded unusual when it was announced, in the days following the referendum on Brexit. It became provocative after a series of terrorist attacks, a surprising election, and the recent tragedy at Grenfell Tower. In a tense city, where the sound of a suitcase being dropped in the train station can provoke alarm, to look at the unexpected with sympathy, as an occasion for adventure, is itself unexpected.

The opening encounter is moderated by Rowan Williams, who helped sponsor and organize the conference. The theme of the opening remarks is science or, better, knowledge. To know, begins Williams, is not to attach labels to things, but to walk a human path that is both risky and dramatic. Therefore, there is a need for people who take risks and give space to what seems marginal.

Mary Morgan, Professor of the Philosophy of Science, and Ard Louis, Professor of Theoretical Physics, carry the conversation further. The obsessive "why?" of a curious child is the intellectual paradigm we need to recover. This relentless curiosity saves us from growing passive or conform-ist and gradually generates scientific revolutions. Louis tells about his adventure as an astrophysicist, from the African jungle to the University of Oxford, a human adventure dominated by wonder. In scientific research, Louis affirms, analysis and scientific rigor are instruments at the service of human creativity, imagination and, above all, the ability to take risks.

Williams adds that it is possible to take risks only if we belong to a community, a place where we can learn that it is okay to fail and that errors do not define who we are. Moreover, he concludes, community affords us a chance to recognize that we are the center of attention of Someone.

In the afternoon, we hear about the "unexpected" in its negative aspects, about events that contradict our hopes and desires. Borrowing the central metaphor from Emily Kingsley's famous essay, "Welcome to Holland," Ian Campbell recounted that learning that his son James had Down Syn-drome felt like a ruined holiday. And yet, Ian declares with emotion, his experiences with little James have been a source of powerful joy, even amid sacrifice and pain. 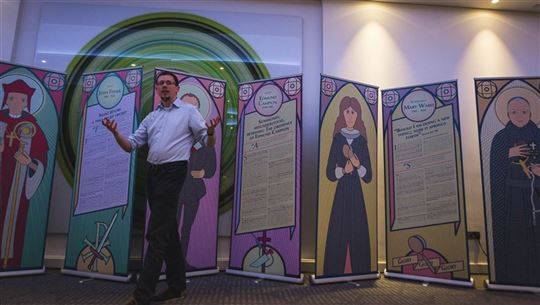 Samara Levy told the story of how she went from being a mother in the English countryside to founding hospitals in war-torn Syria. The force behind the change: taking seriously the impetus of her own I, in front of a situation of crisis. The point, underlined by Rose Busingye of the International Meeting Point in Kampala, Uganda, is to realize that we are infinitely greater than the crisis, and, therefore, are not defined by it. Because we are not ourselves a crisis, we can face the crisis with freedom and intelligence. Therefore, our lives have a value that rises above the circumstances. A woman who is dying in the dust of Africa, Rose tells this rapt audience, has the same problem as all of us here: to understand who we are and the meaning of life, and so a relationship, a dependence on a You.

The value of every moment of life is also at the center of one of the three exhibits built for the Encounter, a celebration of the work of Cecily Saunders, an English doctor and a pioneer in palliative care. In a context where the end of life was considered a complete defeat, a waste to be rid of as soon as possible, Cecily founded a hospital whose aim was not healing but the maintenance of human dignity and freedom in the last stages of life.

A second exhibit tells the stories of the unexpected in four scientific disciplines. From the Higgs Boson to the discovery of exoplanets and non-Euclidean geometry, great discovers are the work of free people, who are open to following and affirming unexpected intuitions. An emblematic case is the discovery of CRISPR-Cas9: for decades considered "biological trash," this group of molecules revealed themselves, to those with attentive eyes, to be the way to a new, revolutionary biology.

Finally, we see an exhibit on British saints, both canonized and not. From Chesterton to Mary Ward, from Bede to John Bradburne, the exhibit tells eight stories of men and women who were open to embracing the unexpected, letting themselves be turned upside down by the circumstances, and discovering that the certainty of life comes from a relationship and not from being in control.

The London Encounter concludes with a theatrical premiere, a retelling of Victor Hugo's Les Miserables from the point of view of Inspector Javert. In an intense and violent monologue, Javert speaks about his "derailment" in front of the unexpected mercy of Jean Valjean, which called into question the way he saw himself and the world.

Embracing the unexpected is never automatic: the drama of Javert is the drama of life, as all those who were involved in the long and often-difficult preparation of the event could verify. The London Encounter only lasted a day, but it was the culmination of a year's worth of labor. It was a path made up of encounters and unexpected happenings, among which the most beautiful were undoubtedly the other travel companions, the strangers who have now become friends. It is an adventure which, at the end of the day, is just getting started.