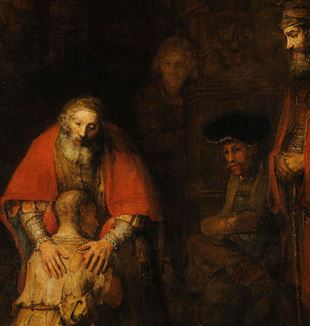 American Christianity today is beset by political gloom. This gloominess is certainly evident in this year’s best seller on faith and politics: Rod Dreher’s The Benedict Option, which David Brooks hails as the “most important religious book of the decade.”

Inspired by the philosophy of Alasdair MacIntyre, Dreher argues that “the modern West” is “living under [the] barbarism” of moral permissiveness, secularism and individualism. In this new “Dark Age,” public morality is all about individualistic relativism and “moral choices are nothing more than expressions of what the choosing individual feels is right.” Gone are the traditional virtue communities of yesteryear. Faith is in decline. In its place “barbarians” with “designer suits and smart phones” dominate democracies in the name of a “hostile secular nihilism.”

Dreher believes that Christians have been slow to recognize this fait accompli. What it demands of them is forming local communities of committed believers who preserve virtue for a future flowering of civilization. Failure to do so will “doom our children and our children’s children to assimilation.”

Given Dreher’s alarming call to do “battle in the modern world,” Julián Carrón’s new book, Disarming Beauty, which asks Christians to lay down their arms and enter the public square with joy and confidence, may seem wildly naïve. Yet Carrón’s argument deserves careful consideration by Christians attracted to the Benedict Option.

Carrón is a Catholic theologian, priest and leader of the movement Communion and Liberation (in which, full disclosure, I participate). Carrón shares similar anxieties about the modern spiritual crisis of “nihilism” (anxieties that I, incidentally, think are overblown). But, in sharp contrast to Dreher, Carrón does not think Christians should disown contemporary society as a new “Dark Age.”

This is because today’s secular democracies were partly built by Christians (in collaboration with others) and reflect a deep affirmation of their faith. Indeed, Carrón notes, the church in the first centuries was founded on the revolutionary “distinction between the two cities, between God and Caesar.” Similarly, a secular society maintains a clear and crucial distinction between the church and stately power. A genuinely open, secular public space is thus not a disadvantage to Christianity but rather an assurance against the perennial temptation to use power instead of love to spread faith—what Carrón calls the “temptation of hegemony.” This temptation, as Carrón relates, is, unfortunately, something to which Christians frequently succumb. Thus, despite real tensions and disagreements, there remains a “profound harmony between Christianity and [the] Enlightenment.”

Secularism is not the enemy of Christianity but a historic opportunity for the church to live its witness authentically and unarmed. But Carrón also makes clear that the individual freedom defended by secular democracies is not simply an inconvenience necessary for avoiding the temptation of hegemony. Rather, from the Christian perspective, “freedom is the most precious gift heaven gave to humanity.” Indeed, there is no real faith without freedom to reject that faith.

When scandalized by others’ freedom, Carrón insists that Christians should return to the model of Jesus who never forced or coerced conversion. Instead, Jesus always began from the heart or desires of the individual in front of him.

For this reason, Carrón stresses Jesus’ famous parable of the prodigal son whose father gives him his inheritance early so he may fully pursue his freedom and desires even to the point of complete moral dissipation. Why does the father not intervene by the use of force? Why is he not scandalized by the muck of his son’s desires?

Central to the Christian claim is that every human heart has a desire for the infinite, such that every other desire remains restlessly unsatisfied until a relationship with God is formed. Jesus recognized that real faith must always pass through the free desire of the human heart. Instead of coercion, Jesus’ approach was to offer people a bigger, more engaging love.

Carrón insists that this is why the earliest Christians did not focus on saving civilization but instead desired intensely to mix with Jew or Greek, to present to “everyone a truly desirable humanity.” This means that Christians, above all people, should affirm individual freedom—allowing others to test out their desires and see if anything else will satisfy them. Indeed, Christians should even love this journey, this dramatic destiny of all God’s prodigal sons, who demand their inheritances and test their desires.

By contrast, Dreher’s book is filled with a deep ambivalence about individual freedom. Although he insists that Christians need the freedoms of the modern state to carry out their Benedict Options, he at the same time wants to denounce this state for its “inadequate” goal of “facilitating and expanding human choice.” Dreher’s project both denounces and requires the secular spaces of freedom he so distrusts.

This is very different from Carrón’s insistence that Christians should embrace the “drama of freedom.” According to Carrón, it is clear that returning to a society “based on Christian laws” is “against the very nature of Christianity.” Instead, Christians should seek to affirm and revitalize a “space of freedom” in which “nothing is imposed by anyone” and a society forms in which “each person can freely contribute to its construction, offering his own witness.”

It is difficult to imagine a position more diametrically opposed to Dreher’s belief that “following your own heart, no matter what society says, or the church...is devastating to every kind of social stability.” Thus, although Dreher at one point hints that Carrón’s Communion and Liberation is possibly in the spirit of the Benedict Option, he is clearly wrong.

Ultimately, Carrón believes Christians should come to the modern space of freedom armed with nothing but the beauty and attractiveness of their lives. The authentic Christian “is not afraid of having to live in today’s cultural pluralism” without special legal privileges.

In spaces of individual freedom, Christians do not evangelize by withdrawing but by forming friendships. In chapter after chapter, Carrón insists that Christianity did not begin with a moral system or assent to dogmatic claims but with Jesus, who offered his companionship. Faith, in other words, begins as a relationship—as a willingness to fall in love with and accompany others. Far from embattled retraction, Christians today should see their politics as one of friendship: of being able to embrace and stay with “the Other.” And not because “the Other” is a burdensome duty but because “the Other is a good.”

Once again the model is Christ. Carrón recounts how in the Gospels the Pharisees thought Zacchaeus needed moral correction. But Jesus instead puts his trust in a real relationship. To the great chagrin and scandal of the Pharisees, Jesus asks to eat at Zacchaeus’s house. In other words, Jesus sees Zacchaeus with all his imperfections and confusions and still loves him.

Carrón believes the great danger for Christians today lies in reducing their faith to a new “Pelagianism,” or the erroneous doctrine that the faithful save themselves through their efforts. In this light, Dreher’s call for civilizational action and virtuous withdrawal does not place sufficient trust in the essence of Christianity—namely, relationships with others.

Over and over again, Carrón seems to ask: If Christianity is true, what do Christians really have to fear?


This article originally appeared in America on June 14, 2017.#DisarmingBeauty