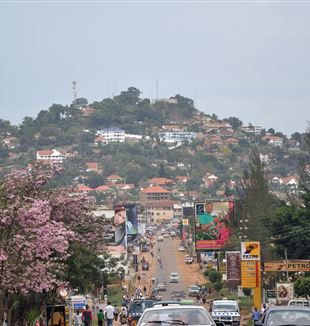 Arnold recently began his university studies in international marketing in Kampala, Uganda. At 19 years old, his vision is impaired: he is blind in one eye and the other is damaged. When he came to Italy some months ago, he wanted to visit the tomb of Fr. Luigi Giussani. He left a note with a prayer. “I asked him that my heart may desire as his does.” He did not ask to be able to see. “Life is full of people who see, but how many among them are happy?” Even now, as he thinks back, he has no regrets; he is at peace: “Our desire takes us far. Not our eyes.”

Arnold knows what he wants; he wants to desire. It can be frightening, to have that heartbreaking need for everything, that “emptiness inside,” says Esther, 18 years old. She and Arnold were among the hundred or so youth at the CL Spiritual Exercises for university students in Eldoret, a city located half way between Kampala and Nairobi. Esther says: “I do not want to get rid of this emptiness.”

Why are these students so attached to their longing?

Their life changed when they encountered Christianity. “Even though nothing changed,” says Rose Busingye, a CL community leader in Africa. They have not become rich. They still eat one meal a day, they still walk for miles on dirt roads, and still have broken families. “I want to escape one thing, I want to avoid another….” Rose continues: “In spite of what they have lived and still live through, they do not want to escape anything. And I follow them.”

People came from Uganda and Kenya, but also from Burundi, Angola, and Mozambique to spend three days with Nacho, Fr. Ignacio Carbajosa, who traveled from Spain to lead the lessons and assemblies under the main theme: “You are the desire of my soul.” Those from Kampala traveled eleven hours, while those from Nairobi traveled nine. To pay for the event, they washed cars at their parishes, in the midst of the drought plaguing their countries. They came even though their universities were shut down due to a strike of professors, a situation that could go on for months.

Gladys’s Path
For young Kenyans, once they finish high school, the concept of attending university (for those who are accepted) means finally getting to do what one wants. This means class by day and every imaginable transgression by night. This is the norm. But Fr. Gabriele Foti, a missionary with the Fraternity of St. Charles Borromeo, thinks of Alex, Patrick, Maria, and the others who have begun to share in an experience that is unfamiliar in this context: “Studying together, doing School of Community, taking their life seriously, and even discussing the emotional scars, which are brutal here, at all levels.” Bonds are formed by blood, ethnicity, and tribe, and bonds of friendship are rare. “Especially with adults.”

And yet, in Eldoret, the youth are constantly asking questions, during the assembly, at meals, during breaks, and into the night. “In this culture, the youth are not allowed to meet the gaze of an adult until they get married,” says Nacho: “It is clear that these students have met people who engage their freedom. As I think about the educational crisis here in Africa, but also in Europe, it amazes me to see that there are youth who live this way: mature and free personalities and a faith that is becoming their own, through which they face life. Not only do they look you in the eye, but they also look at their own hearts”–unafraid to face their own questions.

Gladys belongs to a large and problematic family that lives in the slums of Kireka; she hated her alcoholic father so much that she hated herself. “For me, life did not make sense. I was just waiting to die.” She is 17 years old. When she met the Movement, she discovered that she was loved so immensely that she began to love her father, even when he was drunk, and to do School of Community with him. As a result, he began to open up, like a child, to the possibility of a new life. “I thought that my desire originated and ended in me,” she says: “Instead, I understood that it is the possibility of a relationship with the One who makes me, who calls me through my own desire.” Every night, before going to sleep, she asks for only one thing: “I want to meet You again tomorrow.” In the morning, she asks to look at reality with hopefulness. “To get to school, every morning, I have to cross two wide roads in which the cars race by, without any consideration towards us students who are walking across. This is something that has always made me angry and upset. Now I know that when it happens, God is telling me: ‘Gladys, learn to be patient.’ Even through this, with the cars, and in everything, God is educating my heart.”

“Sometimes we think that School of Community is too challenging for the youth,” says Nacho: “On the contrary, they grasp everything. They take it very seriously. The good news, the ‘Word that saves,’ comes neither from introspection nor ideology, but only from Christ, through the Church. They have been told that they are valued. And this is verified in experience: a human person, with an irreducible ‘I,’ that depends solely on God; it is the Kingdom of God, the possibility of knowing the meaning of things, and that life has a positive destiny.”

Without a Gang
Giorgio Vittadini, a dark-skinned young man whom Rose named after a friend of hers, grew up in the Welcoming House, a home for abandoned children. He went to the Spiritual Exercises for the first time: “I had soccer practice, but when I read the title, I just had to go. I wanted to know what the desire of my soul is.” He heard Nacho say: “We do not discover our true desire by means of an analysis, but through a particular event that happens to us.” He then looked back on his life. “All of the beauty is given to me by Rose and the others in order for me to grow. There is someone who is fighting so that I may live. God is reaching me; He became flesh for me.”

Arnold and his family are now living in a part of town controlled by a gang. Virtually all of the youth in the area are part of it. “I wanted to remain myself,” he says, “With one name: ‘I.’ They are always there, in the street, standing around, with nice clothes, watches, cell phones. Things that every guy would want. “But I felt that I had something that they didn’t have.” They began to single him out, to call him names, and to become aggressive. All of them turned against him, just because he was not one of them. One day, he realized one of them was following him. He picked up his pace. But the other guy still caught up with him. “What’s up, man?” He kept talking to Arnold and then said, “I want to be your friend. I need a friend like you.” At first Arnold thought he was joking: “Don’t you already have friends in the gang? What do you want from me?” The other guy answered, “You are happy and sure of yourself, without a gang. Me, without the gang, I couldn’t... I would feel like nothing.” “In that moment,” Arnold recounts, “I understood the difference between a friendship and a gang. I am happy because I am loved, because I belong to Someone who makes me free, who makes me myself.”

As the students speak, a thought passes through the mind of Fr. Adriano Ukwatchali: “The future of Africa is here.” Originally from Angola, he began to participate in the Movement a few years ago. Here in Eldoret, José and Horacio, two law students from Benguela (Angola), are with him. For them, this is a first in more ways than one: first Spiritual Exercises, first time outside of Angola, first plane flight... Fr. Adriano says: “Above all, it is the first time that they hear desire talked about this way. They told me: ‘We had never asked ourselves why we had this infinite desire inside.’ They are stunned to listen to the discussion about life, about faith having to do with life. And then they can’t believe that people who do not know them helped them pay for the trip.” Still, he is the one most touched by everything happening in these days: “The way we were welcomed with great care, the unity among people of different origins speaking different languages, the secretary of the Nuncio to Uganda who acted as our interpreter, the discussions.... Most importantly, our participation together in the Eucharist. That was the center of it all.” Why does he see the future of Africa in these young people? “Because of the effort that they put into their life. They do not take part in the apathy of Africa; they want to change it. You can tell by the questions that they ask. They have understood the meaning of life and want to follow it without taking anything for granted.”

Cristine is 16 years old. She describes how she has put so much energy into trying to fulfill her desire, but has never managed to. “My desire is limitless!” she says happily. “For me, it’s like being reborn, learning that this desire is the only way I can truly live.” She was struck by the way Nacho spoke about our need to give thanks. “If someone asked me, I would say that the person I want to thank is God. He came to meet me in the most concrete way possible: Fr. Giussani revealed the beauty of living and communicated it to others. I don’t understand everything... but I don’t care. I’d never go away, because I would lose something that is very difficult to possess: myself.” But if God gave us everything we desired, would we still look for Him? It’s just one of the many questions that Prim, 17, carried with her to the exercises. She relates a dream she had recently: “I desire even when I dream; desi “These young people do not take part in the apathy of Africa; they want to change it.” Tre never sleeps!” she says, making everyone laugh, and then says in all seriousness, “He is the one who made me with this nature. And who is saving me already, as I am desiring.” It’s the same thing that surprises Freddy: “When I read the title of the Exercises, I immediately concluded: ‘Yes, you, Lord, are the desire of my heart, because without You everything is small. It’s easy, I get it.’ But the next moment, walking for an hour in silence, the real drama started, right in that silence–I wouldn’t have this desire by myself. It’s there because an Other has it for me, because God is saying to me, ‘Freddy, you are the desire of My soul. I created you to share this desire, this love that I have for you.’ I don’t know what will happen tomorrow, but as long as I am breathing, I want to fully live this desire that constitutes me.”