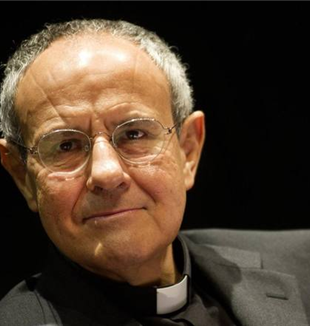 Today, 50 months later, could I ask you for an evaluation?

I did not conduct a campaign against hegemony. I just re-proposed the beauty of the experience of our founder, Fr. Giussani, arguing that there was no need to validate it with any added power. The only way to relate with the truth is freedom, and for this reason, the search for hegemony is in contradiction with the truth.

However, in doing so, the extraordinary political machine that CL was in its heyday has been dismantled.

Our objective is to contribute to the common good; I don’t want to lose the value of political passion, but I reminded our friends that our motivation comes from something more fascinating than gathering the crumbs that fall from the table of the powerful.

However, in this way have you ended up unarmed?

Yes. We brought the pertinence of faith to the needs of life back to its position of primacy. I prefer witness to activism. After all, God knocked gently on the doors of our hearts. He did not use His exterior power, but evoked our love.

Aren’t you afraid that in all this CL is losing its identity?

Casting off power does not mean losing your identity. God did this and became flesh. We, too, could do something similar, though infinitely smaller.

In the meantime, however, history has not stood still (rather, the opposite!), and a paradox has emerged. You were very active against secularization and the protests of 1968, and yet today in front of the threat of radical Islam you profess that you are unarmed.

I’ll respond first of all to the question of the 1970s. Fr. Giussani explained ex-post that our activism was motivated by an “existential insecurity,” and said that we had accepted the same playing field as those we criticized. In the end, we were a reactive presence when we should have been an original presence. To live, CL did not and does not need an enemy. This holds for Islam, too.

They are different weights. The French writer Houellebecq speaks about the risks of the West submitting to the culture of Islam.

The risk exists because everything passes through freedom, and nothing is taken for granted. Goethe said, “What from your father you’ve inherited, you must earn again, to own it straight.” The migrations and even the terrorist attacks can be a stimulus for re-proposing the originality of being Christian. It is first of all a challenge for ourselves, before the others. We should ask ourselves what the migrants who reach our countries find.

I want to defend the possibility of living Christianity in a space of freedom for all.

… and the West is the best place for doing so. If Christians also use the errors of our civilization to delegitimize it and to equate “turbo capitalism” with ISIS, we’re finished.

I don’t want to delegitimize it. Of course I defend the values of freedom, the person, work and progress. The problem lies in how. Pope Benedict XVI reminded us that the Enlightenment sought to save the fundamental values of the West by removing them from the religious discussion, but it committed an error, and does not know how to get out of it.

So then, can we say that the crisis of the West is a crisis of solutions and not of legitimacy?

I would agree. As Christians, when we organize an after-school service or help a migrant, we give a contribution to the solutions. The values of the Enlightenment thinkers have collapsed almost through inertia. At this point, it is urgent to “courageously lay new and solid foundations,” as Pope Francis said, and we are on this road. Therefore, when we encounter a need, we do not stop at material assistance: we also respond to a search for meaning. The enemy is nothingness. Thus, we are anything but neutral. We give hope a chance.

Don’t you think that the Islamic issue is central in Europe?

No. I think the center of the issue in Europe is to communicate a conception of life and values that help them to live in the midst of the confusion of this phase of modernity.

With the execution of Fr. Hamel in Rouen, there has even been talk of martyrdom. Don’t you think this is a sufficient proof?

Martyrdom is part of the risks of the Christian faith. We have been persecuted since the time of the Roman Empire. It did not start with Islam.

Even proponents of liberalism, and I’m quoting The Economist, have come to criticize globalization and to ask for a reassessment. What is your opinion?

Looking at it realistically, I don’t think globalization can be stopped. It is also an opportunity for encounter, because walls fall; it is up to people of good will to step forward and serve the good of humankind. If it was possible to rebuild after the Second World War, why shouldn’t it be possible today as well? Why isn’t it possible to replicate what De Gasperi, Adenauer and also Togliatti did at that time, and re-establish the institutions?

In closing, if I were to ask you to imagine CL ten years from now, what would you see?

That it will still be an instrument for contributing to the good of all. The existence of the Movement is a means, not an end.