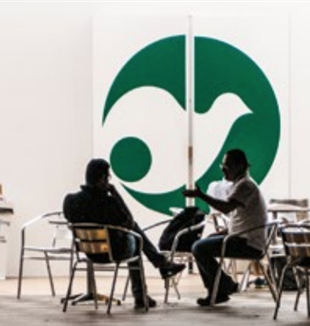 “If I ask myself what it is about the Meeting that strikes me, and why I continue to go back, I have to be honest: my answer is first and foremost related to what I’ve seen in Communion and Liberation.” Giorgio Buccellati, a world-renowned archeologist and expert in Mesopotamian civilizations, who has spent his life with his wife Marilyn doing on-site excavations in Syria and Iraq, is a dear friend of the Rimini event. He appeared for the first time in 2012, for a presentation with Fr. Ignacio Carbajosa comparing Mesopotamian religiosity with that of the Biblical world. The following year, the comparison was between the conception of the State in Mesopotamia versus that of the people of Israel. In 2014 he helped organize the exhibit “From the Depths of Time: the Origins of Communication and Community in Ancient Syria,” and this year, it will be his wife Marilyn who will introduce an exhibit on ancient Georgia.

“The first time, I came with a kind of diffidence toward the Movement. I’d been living in the United States for a long time, I had no direct experience [with CL] and was unfamiliar with Italian polemics. I was affected by the idea, shared by a good number of Catholics, that the Meeting was an ideological place,” Buccellati told us. “Then I discovered that it’s not like that, not at all. My experience in Rimini caused me to reflect. I asked myself: why isn’t there ideology at the Meeting? What does it mean that faith can’t be an ideological position? In Rimini, it became clear to me: ideology is presenting ideas without any reference back to values. The opposite of ideology, then, is experience: presenting a value as a living reality, capable of giving form to certain ideas, but that exists above and beyond any idea.”

An Impact in Life
This value, the professor explains, is something you can compare with experience at a personal level. “At the Meeting everyone, from the last volunteer to the ‘directors,’ share the same spirit of openness and desire to let themselves be led by true values. Values that, in any case, were those I also already shared. Because, in the end, the greatest ‘value’ is God Himself. But it helped me a lot to see them lived in such a concrete, animated, and beautiful way.”

For Buccellati, it was also important to recognize in Rimini a characteristic that he sees as proper to the Church: the great variety of people. Not an anonymous crowd, but one in which you always see a personal reality. “At the Meeting everyone, at an individual level, is aware of those central values, those that have an impact in life. I could see it clearly working with the group of college students who were guides for the exhibit on Syria. They responded to our prompts in a personal way, but in a way that was still consistent with those living values I was talking about. I saw the same thing in the adults: the same sense of making something one’s own, free of any rhetoric.”

And what about the title for 2016? What comes to mind when he hears, “You are a good for me”? “It connects to the problem of modernity. Our society is seeking to reach a kind of virtual reality, one set by algorithm. Hence we don’t interact as one would with a you, but as one would with a computer, or with a domesticated animal that does what we expect it to do. We don’t look for difference in another person, but rather are always seeking to ‘domesticate’ them, making them as much like us as possible.”

Here, Buccellati speaks about a kind of anonymous homogenization that, in his mind, is becoming more and more the ultimate aim in life. “Instead, a you is a surprise–you all use this word a lot: something that I don’t expect that can even disturb me, but precisely because of this it can be enriching. Saying, ‘You are a good for me,’ means that ‘You are different than I am.’ Just as in marriage: you have to be open to a kind of integration, to welcoming, embracing, and appreciating difference which leads you in the direction of communion. Right: ‘Communion and Liberation’ sounds like a funny phrase, but it describes this dynamic well. Because ‘communion’ means there is a reciprocal insertion into the life of the other, but ‘liberation’ means that within this relationship you’re free from the egotism that tends to reduce communion to one person being absorbed by the other.”

When this happens, Buccellati explains, a free relationship is born; one that leads to mutual dialogue, which in turn generates reciprocal enrichment. “Which is the contribution that, in my eyes, the universal Church can offer to the secular world, to society. The Church proposes the most personal reality possible, that of the relationship with Christ, within the ‘communion of saints’ that unites everyone: that immense number that extends across time and space, from ancient Mesopotamia up until the time of those who will see what we call ‘the end of the world.’ An unimaginable number within which, however, each person retains his or her uniqueness. This is the beautiful message that Christianity proposes to everyone, and is what attracts even the very secular.”