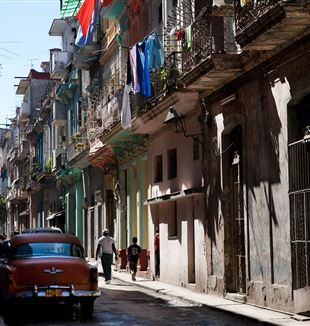 “What I experienced was a mixture of shock, surprise, and joy…”These were the words of Orlando Márquez, the editor of the Palabra Nueva newspaper of the Archdiocese of Havana, which was founded in 1992 and is the voice of the Catholic Church on the island. He is fully aware of the historic significance of the agreement to re-establish relations between Cuba and the U.S.; of Barack Obama and Raúl Castro’s simultaneous announcement of the end of a cold war that was begun 53 years ago, before Márquez was even born. The first outcome will be easier access for travelers and tourists, business deals, credit cards, the Internet and other communications. Soon there will be anAmerican embassy in Havana, and Obama will ask Congress to permanently lift the embargo. “It was December 17th , the feast of St. Lazarus, a saint to whom many Cubans are devoted,”the editor tells us.“The national shrine to him is in Havana, and thousands of people come each year to visit it, from all over the country and from abroad. That day, many Masses were celebrated and, in each, the priest spoke about the announcement, and the people broke out in applause and expressions of joy. Not just the faithful, even the guards. Many of the churches in Havana rang their bells in celebration.”

So, you would say that people are happy?
Overall, people are happy, though some less so. It’s understandable, because all these years of tense relations have caused a lot of pain on both sides of the Florida Straits. We are a people divided by water, by politics, and by the conflict between the two governments.

In your opinion, what is the significance of this decision?
It’s a major event.It marks the end of decades of political tension, as well as suffering, fear, distrust, and even lives lost. Now, for the first time, both presidents are in agreement and have publicly declared that they’d like to leave behind the policies that have failed. Undoubtedly, they both had to overcome strong resistance, because they have shifted a structure of policies that had been cemented by years of tense relations. However, the time was right, and they did what they had to. On top of it all was Pope Francis’s intervention. I can’t help but think of Divine Providence...

What impact will this have on Cuban society? And on the regime?
Obama announced the measures that will be put into place in the short term.We still do not know the response of the Cuban government to his proposals. Usually Havana is very careful before taking action, but even with this great caution, I think they will respond positively. If that’s the case, as many of us hope, the impact will definitely be fruitful for our society. Our two countries are very close geographically, and we share a history, common interests, and threats from natural or other disasters. Around two million Cubans are currently living in the U.S. and their remittances have an impact, even if up to now unofficially, on the Cuban economy. Anything that opens up the flow of money, communication, or people will be positive for our country.

It’s an agreement that comes at a unique moment in Cuban history. Is this part of the reforms promised by Raúl Castro?
Cuba is currently in a serious crisis; yes, economically, but also politically and socially.We have that in common with several other countries. It has affected our country even more deeply, because the Marxist-Leninist model that was imposed on society 50 years ago was presented as a permanent, infallible one. It’s difficult to admit disappointment and accept that what was believed to be a perfect–or at least better–system was not so. It’s complicated to admit that we need to resort to the foreign money of capitalists to maintain what we have. Amidst all that we do have, there are also social programs that have long deserved recognition from the Church, such as health care and education for all. This is the reason Raúl Castro initiated the reforms, but it is for the same reason that the reforms are moving forward very slowly, because bureaucracy resists anything that would change its structure. I don’t think that the agreement with the United States is part of the reforms, but I do think that it will make a significant impact by removing some obstacles, thereby facilitating the enactment of the reforms.

The end of the embargo would certainly be a gift for the Cuban people.Will it be a benefit for the regime as well?
Lifting the embargo could take much more time than enacting the measures announced on December 17th . I’d prefer to wait to make a judgment on this point. In any case, as can be seen by Washington’s recent sanctions on a number of European banks for doing business with Cuba, getting rid of the embargo could benefit many parties.

Why did the Holy Father decide to intervene personally? What impact could this have for the life of the Church in Cuba?
I don’t know. It likely has to do with his Latin American roots, and his in-depth knowledge of this conflict: it has been going on for a long time, with an impact on the entire region, and has also affected relations between the United States and all of Latin America. Maybe this, together with the fact that he is a shepherd who is sensitive to the tragedies and needs suffered by people throughout the world, moved him to take action as he did. Honestly, we don’t know in how many conflicts the Pope has intervened, just as other Popes have done before him. In this instance, he received a positive response from both presidents, and so it was made public. Certainly we are very grateful for his attention and his actions, as well as for having trusted in the good will of the leaders of both countries.

What are people saying about the Pope’s taking action?
His involvement was a surprise. We’ve seen a positive response to seeing the Church making an effort to contribute to and facilitate resolutions to conflicts such as this one. Francis’s role took on even greater notice because both presidents very openly gave him credit for influencing the decision. The day after the announcement, the Granma, the only national newspaper and official tool of the Communist party, published the press release from the Holy See alongside the speeches of Raúl Castro and Barack Obama.The Cuban people welcomed his action.