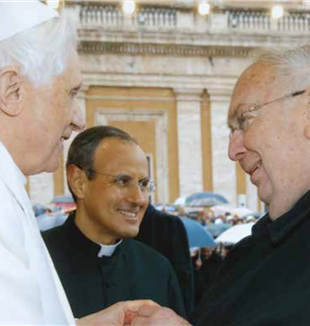 I met Lorenzo Albacete for the first time in in 1996, in Washington, D.C. He was introduced to me as an intellectual who might be able to help with the growth of CL in the U.S. After letting me talk for a while explaining what CL is, he interjected in his ironic and knowing manner: “But I am in the Movement! The problem is that no one will recognize it...” That was how I began one of the greatest friendships of my life: a friendship with a man who made me feel totally at home with his humble capacity to establish a familiar rapport, and who at the same time was a major actor in the life of the contemporary American Church.

Lorenzo was born in San Juan on the island of Puerto Rico.In the beginning, his life was shaped not by a religious vocation but by science. He was a promising young physicist about to finish a prestigious doctorate when the CIA confiscated his dissertation because it contained military secrets of national interest. For a more superficial man, this would only have been an obstacle. For him, it was a sign which prompted him to rethink his life. He intuited that science couldn’t fully answer his desire for knowledge. This was the beginning of a “late” vocation that led him to become a priest and theologian who would quickly gain renown among Catholics throughout America for his talks and writings.

God at the Ritz
Albacete was made the dean of the John Paul II Institute in Washington, D.C.; and, having become close friends with the future Cardinal Sean O’Malley and many other American bishops, was named an advisor on Hispanic affairs to the U.S. Conference of Catholic Bishops. He met Cardinal Karol Wojtyla in the mid 1970s, when Lorenzo was given the task of driving the young cardinal around D.C. during a meeting on the family that both were attending. These experiences never sowed the seed of pride in him; he remained a humble man in search of a faith that was personal. This could be seen in 1998, during John Paul II’s visit to Cuba, when Fidel Castro was struck by Albacete’s insistence that the foundation of the faith is the defense of what is human.

Lorenzo never stopped seeing himself as one of the beggars in the Gospel who needed to be saved by a loving Father. Fr. Giussani won him over because of the respect and sensitivity they shared for the freedom of every person, and for the acknowledgement of the existential anguish of modern man–themes which are omnipresent in the land of the Stars and Stripes. For both men, neither the divided subjectivism in which American Protestantism loses itself, nor the attempt to live a“neo-Gothic” Catholicism dominated by rules and structures and at odds with modernity, is capable of responding to the drama of human life. It’s beside the point that Lorenzo was full of the vices most intolerable to American Puritanism: smoking, drinking, and eating–a point he never tired of joking about. Every man and woman needs someone who can make them more free each day wherever they are living, even if they happen to be in a five star hotel, as Albacete suggests in his wonderful book God at the Ritz. Meeting Fr. Giussani turned out to be the most valuable gift for Lorenzo’s life, so much so that one time he rescheduled an appointment with Wojtyla, who by then was Pope, because Fr. Giussani had already scheduled an appointment with Lorenzo on the same day. His ongoing discussions with Giussani, both public and personal, became the point of unity that directed his life from that moment on. Thanks to his merit as a scientist, in the mid-1990s he was named rector of the Pontifical University of Ponce in Puerto Rico, but resigned after a short period. It was more his style to step aside rather than fight a battle to impose his ideas on people who did not accept them.

Father and Sons
What remained of Albacete’s time on the island was the gift of the birth of the CL community in Puerto Rico. He returned to New York where, having been named the spiritual guide for CL, he dedicated himself full-time to the Movement. He traveled from coast to coast presenting the books of Fr. Giussani, leading Spiritual Exercises and retreats, preaching, and meeting with lay people, priests, bishops, and professors.Sustained by his friendship with Fr. Carrón, he tirelessly proclaimed the faith to–and helped–everyone he met, and it was through him that hundreds of people met CL and were fascinated by the charism.

Even those who seemed the farthest from and least interested in the faith wanted to speak with Lorenzo, who over his lifetime wrote for The New York Times Magazine, The New Yorker, and The New Republic; he appeared on CNN, PBS, and EWTN; and he was quite at home in the secular settings of the “city that never sleeps,” a sin cultural events such as the New York Encounter, Crossroads, and the Rimini Meeting in Italy. Looking at him was like looking at Chesterton’s twin, both in physical appearance and demeanor. Just like the writer, his face was never without the smile of one who knows he has a loving Father always waiting for him. Who could forget the time when he, making his entrance at the Rimini Meeting on an electric cart, imitated the Pope in his “Popemobile” offering a three finger blessing? Or who does not still laugh thinking of the theological congress in Mexico where, after one of his lectures, he asked to sing Cielito Lindo to make up for the time when he was six years old and couldn’t finish it in front of his parents at a public celebration at school?

Fried Chicken
So many of us have learned so much from Lorenzo, especially the meaning of Veni per Mariam: Christ was given through the flesh of Mary–not generated from our thoughts, which is too often how we think (not only in America but in the whole world). His view of the world was fiercely loyal to reality in all its concreteness. He looked, touched, and inhaled fully. For him, the Infinite was always the theme of the finite; God was a fact discovered in experience, never an intuition of the mind. The fried chicken and fountain pens that he loved were not separate from this. His perception of the coincidence of the Mystery and the concrete particulars of reality is perhaps the characteristic that others cherished most in him.

Even in the last years of his life, when his illness and the need to take care of his brother limited his travel, Albacete still had a profound influence on the thoughts and hearts of friends and others, both near and far. “I lived a beautiful life,” he said just a few days before leaving us. “I always followed Christ. I will live as long as Christ wants me to live.”