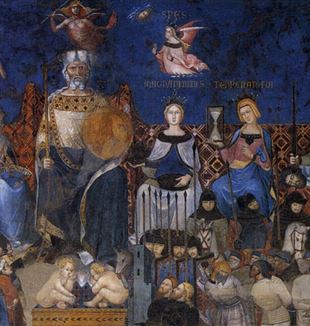 The Good Government allegory by Ambrogio Lorenzetti is probably one of the most famous fresco cycles in Italian art history. Every time I enter those rooms of Siena’s City Hall, I am reminded that from the 1300s to today, the question of what a good government entails has remained open. In the 14th century, the citizens of Siena decided to celebrate a period of great prosperity in the city–before the plague came to decimate the landscape–and hired one of the best painters of the time to paint, in the halls of the Palazzo di Governo, an “explanation” of what makes a political institution just and also what makes it tyrannical. This theme was decisive and central for the people of the Middle Ages, as it was for the great Greek and Roman philosophers who dedicated the greatest contributions of human thought to politics and laws.

“By its fruits ye shall judge it.” And what about today? Seven centuries later, can we say we have all the answers? Certainly not. Just look around or simply turn on the television, and you are invaded by waves of confusion, incoherent cries, appeals and protests, proposals, and judgments–all generically labeled with the term “politics” but that you would be hard pressed to say vaguely approach the idea of “just government” or of “politics” that the people of the Middle Ages sought.

So now, do we give up on everything? Do we, too, dive into the great welcoming sea of anti-politics, where the entrance ticket costs little and there is plenty of space–just criticize everything and you’re admitted–but from which not one credible constructive proposal emerges?

The Middle Ages, the 1300s in which Lorenzetti lived, was certainly not an example of “earthly paradise.” There were wars and tyrants, despots and dirty dealings, battles for investiture and palace plots. In fact, in the Palazzo Civico, precisely in front of the frescos of Good Government, there are those of Bad Government.

What is the point? The point is to see the difference. This is the greatness of that fresco: it does not describe a theory of the common good, but it shows the difference between living a hypothesis of common good and living according to one’s own interests. It makes you want to live well. The painter describes the effects that Good Government and Bad Government produce on the city and its countryside. “And by its fruits you shall judge the tree.” This, in the simple minds of the people of the Middle Ages, was the guiding principle, and I think it is proper for today, as well.

After all, without a personal desire and attempt at good, there can be no common good. The idea that the common good is the artificial product of an institution (be it a democratic one or one managed by an illuminated despot, little changes), or the idea that the common good is the fruit of “systems so perfect that no one will need to be good” (T.S. Eliot, Choruses from The Rock) is the gravest illusion that has ever struck humankind. Instead, the re-starting point is beauty, not rules or morality. The common good always begins as a personal decision, as a hidden sacrifice, not on the public square–it is immediately engaging because of its truth. We must be aware that the first contribution we can give to the current political debate is the awareness of the public (that is, political) “value” of our living and of our dying.

Yearning for certainty. Have we already forgotten the season of the “power of the powerless” of Václav Havel or The World of Life: A Political Problem, of Václav Belohradský? Far worse than bad government or anti-politics, the context in which these witnesses (and friends) lived impeded any public expression, but this did not stop the birth of a new political generation, and today we see the results. For us, too, the greatest help in building the common good of our nation is to “cry out from the rooftops” that examples like this exist, to be moved by their beauty, and to be convinced by the reasons they express. After all, precisely this is what moved and convinced the highest figure for Italy’s “common good,” President of the Italian Republic Giorgio Napolitano, to invite listeners at the Meeting of Rimini to “bring to your political involvement; your spiritual, moral, and social motivations; your sense of the common good; your attachment to the principles and values of the Constitution and to republican institutions… Open yourselves in this way to the encounter with other interlocutors representative of other, different cultural roots. In this time of uncertainty, bring your yearning for certainty.”

When I was young and was active in politics at the university, our slogan was: “The first politics is living.”

If we observe attentively the Lorenzetti fresco, we will note that it is not Justice who holds the scales (as in most known images), but Wisdom, the knowledge of truth; it is to Wisdom that Justice directs her gaze.

Therefore, the first thing is not to be amazed or scandalized by the bad government of our era, but to keep our gaze fixed on our human experience to trace in it the unmistakable features of the Good. As Benedict XVI continually reminds us (see, for example, his Message for the 2013 World Peace Day), difficulties, even those that clearly have a malignant or destructive intent, are allowed so that the truth in us may be more clearly affirmed. This is precisely what is happening today in our public debate. The “antipolitical” climate of our times, which pushes a great many to distance themselves from what is of the general interest, is instead a powerful invitation to realize the “public” (and, hence, “political”) nature of our existence, as simple people, not representatives, mayors, or counselors. If we do not realize this universal value of our experience, a new political generation will never be born. But if we continue to observe the fresco attentively, there is another surprising detail: two cords descend from the two plates of the scale, and end in the hand of “Con-cordia” (literally, “the one who holds the cords”), and, from Concordia, this rope reaches the Common Good (the representation of the City of Siena). If you think about it, this is truly striking: the citizens are bound in the sense of “grasping onto” this rope. They are in “accord” with the common good.

Thus, the law, which St. Thomas defined as “an ordering of reason directed to the common good,” “legality,” is not a chain that binds and limits, but is a help, like a rope linking mountain climbers on a difficult ascent, which offers a sure point of support so that all can stay together and achieve a goal that would be impossible to reach alone.

The common good is not a theory, or an a priori alignment; it is an eminently practical notion, in the noble sense of the word, in the sense of “practical reason.” In other words, only those concretely engaged with the reality before them can perceive it. Sitting at a bar or in front of the TV, the common good does not exist; it’s merely the case of “fellowship in woe doth woe assuage.” Only those who feel that every act, even the most hidden, is always before Someone, only such a self-conception gives rise to action capable of the common good. It does not come from strategies or programs, even if they are theological or moral dictates.

As the Pope reminded us, amazing everyone in his speech to the politicians of the Bundestag in Berlin (the place dedicated to the government of the common good): “In history, systems of law have almost always been based on religion (...). Unlike other great religions, Christianity has never proposed a revealed law to the State and to society (...). Instead, it has pointed to nature and reason as the true sources of law (...).” It is the same difference there would be in trying to identify elements common to Catholicism and Islam starting from theology, compared to starting from the historical encounter between a Catholic and a Muslim, one that really happened, and the friendship that inevitably was born.

Only the “practical” category of encounter is capable of broadening everyone’s reason. Thus, as Fr. Giussani said (in 1964!) only a true idea of “dialogue,” not just a formal one, is the point to recover in this moment of opposing monologues between the deaf. “The criterion for human co-existence must affirm man ‘inasmuch as he is,’ and so the concrete ideal of earthly society will be to affirm a ‘communion’ among the various ideologically engaged freedoms. The contract that regulates life in society (‘Constitution’) must try to give ever more perfect norms that assure people of co-existence as communion and educate them accordingly.”

The Christian method. Thus there is a very clear test for establishing when a government of the res publica pursues the common good and when instead it denies it: when it sets the conditions for the flowering and growth of the person, understood as need for relationship and freedom.

“The starting point for a true democracy is the natural human need for co-existence that may help the person to affirm himself or herself and for ‘social’ relationships that do not obstruct the growth of the personality.” A government of the common good, even when it establishes limits or rules, does so only to promote the conditions in which the growth of the person is not blocked, but favored. For this reason, “a government of the res publica that draws inspiration from the Christian concept of co-existence will have pluralism as its ideal. (...) To realize this pluralistic co-existence implies grave challenges: pluralism is an ideal directive for this world. We must, however, commit ourselves to it without fear.” These are passages from Giusanni’s notes on the “Christian Method.” It was almost 50 years ago, but it applies to today. This is the “audacity of realism” that will save a country, not formulas or alignments.

*Full Professor at the Law Department of Florence University where he teaches Constitutional Law and Environmental Law. He is currently Visiting Professor at Notre Dame Law School.