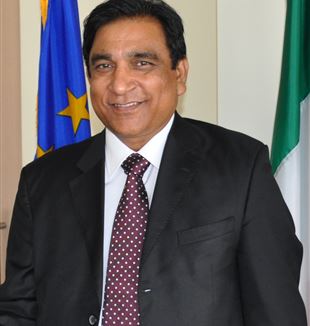 Dr. Paul Jacob Bhatti, Pakistan's only Christian Federal Minister, came to office as Advisor to the Prime Minister on National Harmony under most irregular circumstances. His brother, also a Roman Catholic, Shahbaz Clement Bhatti, was the first Federal Minister for Minority Affairs from November 2008 until he was murdered on March 2, 2011 (see in Traces "Thus Is Born a Martyr" vol.13, n.4), for speaking out against the often-abused blasphemy laws of that country. A medical doctor who had just returned to Pakistan from abroad, Dr. Bhatti left his career only a few weeks later to answer the troubled government's call to service in the void left by his brother, to carry forward the work Shahbaz had dedicated his life to, because "peace is a universal responsibility." In Rome a month after the slaying of his brother, Paul Bhatti professed that he and his family, with the strength of the faith, were able to forgive the assassin, adding, "The person who killed him did not extinguish his light because we will continue his battle with strength and determination." His own approach to this battle is one of gracious humility, approaching Muslim-Christian relations with a simple emphasis on education and engagement, and an undaunted hope for change. Anticipating his public appearance at the New York Encounter on January 19th, Traces caught up with Dr. Bhatti while he was en route to a meeting with His Grace the Archbishop of Canterbury, Rowan Williams, a close friend with whom he shares a desire for interfaith dialogue.

Your address at the NY Encounter will focus on freedom, accountability, and compromise in politics. In a nutshell, how has the legacy of your brother's example and sacrifice inspired your work?
I am so deeply proud of my brother Shahbaz, how he lived what he believed on a daily basis, giving himself wholeheartedly to all minorities. His commitment was unwavering throughout all of his life. He is no longer with us but in a sense he is here as he has left me with this legacy to see his vision and mission become realized.

Besides the profoundly moving witness to hope given by your brother, as well as by Dom Christian de Chergué, of Tibhirine, Algeria, both of whom gave their lives in service of their neighbor, can you think of others who are a source of inspiration and hope?
There are numerous Muslims here in Pakistan of such stature. In his life and work, Shahbaz built interfaith groups with persons of Muslim, Christian, Buddhist, Sikh, and Hindu faith traditions and in these groups they shared common values based on a respect for human dignity. I think of Cecil Chaundry, a Groups Captain and national hero for serving the Pakistani Air Force, known for promoting education and religious freedom. He was a close ally and founding member of All Pakistan Minorities Alliance, established by Shahbaz.

As a minister advocating on behalf of minority voices, certainly you have sensitivity toward woman's issues. While Pakistan has had a woman as head of state, Americans see women in Pakistan and other Islamic countries as lacking basic rights and oppressed...
From the outside, we can see on one hand how women in Pakistan don't enjoy the same rights as men and are limited but on the other hand we had a democratically twice-elected female Prime Minister, Benazir Bhutto, which means that society accepted the role of a woman in such a position. In our Parliament, we have several democratically elected ministers who are women, well accepted by the people and beloved by their supporters. Employing women is about giving a witness for change, bringing them into mainstream society and defending their basic rights of equality. In the West, women have no problem speaking out; they are not afraid because society and legislation allow them to do this. But in Pakistan, women speaking out and running for office face risks from certain ideologies, but they are not afraid either. They show tremendous commitment and courage, and this is the hope of our country.

Over the past decade, the West has grown fearful of the influence of Islam. Can you explain how so many have been enticed to violence, and tell us something about your experience with non-violent Muslims?
There is indeed a bigger picture that we hope becomes more visible to the West. There is a specific extremist and militant element with anti-Western sentiments that developed in some Middle Eastern countries and in Pakistan that has used the name of Islam. These violent groups have not been following the real Islam–I know Islam and I can attest that it is a peaceful faith. This is witnessed by the great support that I have been given since my return to Pakistan by many Muslims in this country. But militants are able to influence innocent faithful who lack education and thus are susceptible to manipulation. In Pakistan, one can find very high levels of illiteracy in the population, with some areas having 50 to 70 percent illiteracy. In addition, these populations suffer from poverty, lack of opportunity, and overpopulation. Many are easily brainwashed by the anti-human sentiment of the few extremists who are not just anti-USA or anti-Western but anti-human, anti-Pakistani, anti-social. This is an ideology that is destroying Pakistan and its society. But, in my work, I have much support from honest and committed Muslims–sometimes more than even from my fellow Christians who committed to and supported me. We are all victims, of course, of a specific destructive mindset. I am a witness.
What is fueling the Muslim fear of Western secular humanism and where does mutual appreciation reside?
We need to consider first that between the West and Pakistan we are talking about two completely different worlds: here, people are literally dying of poverty, while in the West they see much material wealth and enjoyment of the good life. This creates a resentment that the West views itself as better than us and in some ways is even using us for its own advantage. Take, for example, the case of the disputed region of Kashmir: in Pakistan and India it is the view that the British deliberately created this situation. People think that the West is not interested in resolving this conflict as it is the same countries that, while speaking of peace, are also selling arms that fuel the conflict. And in terms of the freedoms in the West, my Muslim friends are concerned about whether there is too much freedom, as in the case of gay marriage, and how people in the West are forgetting faith in God and not following their religious faith, thus leading to many social problems in both Europe and Pakistan. But also, at the level of educated Muslims, we can see that there is a welcome and respect for Christians who share common values, in addition to their belief in Jesus. Islam is not complete without Jesus and we Christians should respect Muslims since there are certainly a number of Biblical teachings present also in Islam.

A key element of your ministerial work is the idea of engagement. Pope Benedict, in his various addresses to Muslims, has strikingly repeated that human reason has vast potential and is elevated by faith. In the cultural dialogue, can you address this challenge of living reason's potential, especially given the importance of Shari'a (religious) Law as a guiding force in Islam?
Some in the Islamic world are afraid that if they do not follow Shari'a teachings then Western forces will overcome them and their society. Others simply follow traditional values and have not been exposed to the modern world and the notion of diversity. But not all Muslims see Shari'a Law in this same way. In 1995, the question of having Shari'a Law as the foundational law for Pakistan was proposed and 80 percent of the people were opposed to this. It has only been in the past few years that religious political parties have become prominent in Pakistan; for most of this country's history since its independence this has not been the case. For most of our history, religious parties only won one or two seats in the Parliament. Most Pakistanis did not wish to follow religious parties, and they put checks on this development. Regarding the Muslim-Christian relationship, in the India–Pakistan history these two religions lived in peace without any animosities and shared their common values on this sub-continent. There was a real multi-cultural and multi-religious society–including Hinduism, Buddhism, and Sikhism–that took root in those regions. Nowhere in the world can you find such diverse religious places as on the Indian sub-continent: temples, mosques, gurdawara…. All lived together in peace with mutual respect of culture and religion, honoring human values. With the promotion of interfaith dialogue, we will surely overcome the current divisions–there is no space in the Constitution of Pakistan for any kind of discrimination and organized intolerance. My brother was certain that the only way forward was to live together with diversity. In fact, this was the vision of our Founding Father, Muhammad Ali Jinnah.

You began your government appointment with a freely given offering of forgiveness stating also that "peace is a universal responsibility." How can the U.S. help promote just civil society in Islamic countries?
The biggest problem for Pakistan is that of education–we need better education, especially in the northern part of the country where extremism and sectarian violence have taken root. In these areas, the vast majority are illiterate and the only schools are madrassas, or religious schools, where the teachers don't even have a proper education themselves. So the West should work to help Pakistan build a good education system, and also provide economic empowerment by creating new jobs and providing opportunities to engage society. In the present situation, there is a battle against terrorism but some of these attacks are killing attacks, and this gives a very bad image to people of the West. In my work, I want to promote education in Pakistan and support the most marginalized in society. I seek to create opportunities for tolerance, interfaith harmony, and dialogue based on relationships. But we have to work for these opportunities, honoring and respecting each others' common values and human dignity.