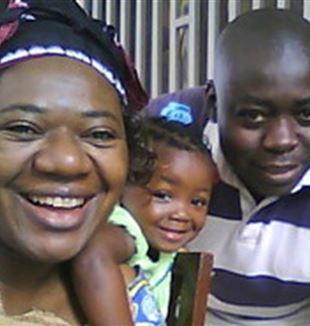 “You are a tree that does not bear fruit.” People’s eyes and comments whisper it, and it echoes inside her. In the African mentality, there is no escape for a woman who produces no children. “They are all there watching you, and waiting.” Month after month, year after year, but in Mireille there is only the pain of not being able to give a man she loves the greatest gift. “It was all I wanted.”

In Yaoundé, capital of Cameroon, with its million and a half population, it is an everyday fact for a husband to leave his wife, and take another one, even when there are children, and many of them. Imagine what it’s like when she cannot give him any.

Mireille and Victorien have been married for 13 years, and nothing of what she had imagined came to pass. Some years before marrying, Mireille, born in 1974, met CL. “Going to church was a formality. I had never felt the need to follow Jesus, He was so abstract. How could you possibly love Him?” Yet Christ called her to follow Him, just as He did with John and Andrew. “I asked two girls where they were going after the choir practice. ‘Come and see.’” Later on, when Victorien asked her to become his wife, she told him, “Know that this woman you want to marry is ‘made’ of faith. If you knew how I was before, you wouldn’t marry me.” And she imposed a condition, unthinkable in a culture in which the man is the master and boss: “Don’t stop me from following the way that ‘found’ me, because this is my life with Jesus.” All the same, her link with the Movement weakened for four years, during which marriage without children became unbearable.

One day, the phone rang: “Come and work with the street children.” It was Fr. Maurizio, a missionary who has a center for nanga boko, “those who sleep on the streets” and live between the street and the police cells. “I told Vitorien, ‘Let me go.’ It was my need to be a mother that was looking for an answer.” Those unwanted mal aimé children, little loved by their polygamous fathers and broken families, or who arrive in the capital from the northern grasslands, began to run to her calling her maman, and to grow to be men with her. But this was not the answer. “I have rediscovered the companionship of Christ and I have opened myself to the Mystery. I have learned to look at all reality for what it is–a gift.” She can no longer believe those who tell her that Christianity is a story of the whites. And her husband began to seek out what she is living, for himself.

Mireille continued to ask for a miracle, but the child did not come. “Why?” She cried out until she was exhausted. One day, Victorien told her not to cry any more: “For me, you are worth more than ten children. I would marry you again today.” An African man cannot talk like this. “There is only one reason for it,” she says. “In our marriage, there is Christ.”

This became clearer when their desire seemed to find an answer. Another phone call came that shook up their life: “It was my husband’s niece. She was expecting a child and wanted us to bring it up.” So now Andrée is living with them. “To hold her in my arms, to have her at home... at last the aim of our whole life had arrived,” said Mireille. “But it’s not, after all. This came to me clearly one evening.” She was at supper and Fr. Marco, a friend, is speaking of himself with tears in his eyes: “Nothing is enough for me. I want Christ to take all of me.” Andrée was running about; she stopped her, squeezing her without taking her eyes off Fr. Marco. “He was a changed man. His desire to give himself covered his face. In that instant, my daughter was in my arms, that child I had so much wanted, yet I didn’t feel her any more, it was as if she wasn’t there. In Marco’s eyes, Jesus was touching me, making me discover myself: I want more.”

Self-awareness, right to the depth of her being, has a power that is changing the world around her, here where people run to get baptized with their life still under the power of the spirits. “I am called to say that Christ is inside reality, and responds to the whole of me.”