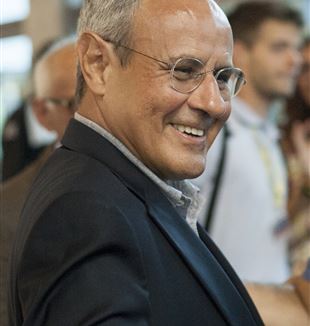 He has just returned from the United States, where he has been meeting the CL communities born overseas in recent years, a sign of a charism that continues to flower and that has set roots in 80 countries. In these days he is preparing the introductory lesson for the 2012 School of Community, the instrument of education to the faith invented by Fr. Giussani to verify how much faith has to do with everyday life. The public launch of the School of Community will be on Wednesday, with a videoconference from Milan that will be followed by 50,000 people connected in scores of Italian cities. Meeting Fr. Julián Carrón, who has guided Communion and Liberation since the death of its founder in 2005, one is struck by his certain gaze, by the determination with which he articulates his words, as if, more than communicating ideas, he testifies to the solidity of the roots that ground his life. A certainty and a positivity that leave their mark in a season characterized by instability and doubt.

What makes possible a positive gaze on reality that is not naively optimistic and, ultimately, without foundation?
The crisis we are going through is not merely economic, but sinks its roots in the human. It is a radical challenge to the conception of life that each of us holds. Here one sees if one has something that “holds” in the face of the crisis, that enables one not to be bewildered, skeptical, or resigned. I treasure in my heart a sentence of Giussani’s that is amazingly current: “I came to believe deeply that only a faith arising from life experience and confirmed by it (and, therefore, relevant to life’s needs) could be sufficiently strong to survive in a world where everything, everything pointed in the opposite direction.” In Germany, Benedict XVI went to the heart of the question, “Does man need God, or can we do quite well without him? When, in the first phase of God’s absence, his light continues to illumine and sustain the order of human existence, it appears that things can also function quite well without God. But the more the world withdraws from God, the clearer it becomes that man, in his hubris of power, in his emptiness of heart and in his longing for satisfaction and happiness, increasingly loses his life.” I often use the example of the radiator: soon after you turn it off, you do not notice anything, but after a while the cold takes over. In front of the crisis, are we alone with our cold, do we believe ourselves self-sufficient, or do we have some resource of warmth that enables us to face it and not be dismayed?

You often quote the line by Péguy: “To hope... one must have obtained, received great grace.” Are those without faith unable to hope?
Hope belongs to the very nature of the human person; it is an original, ineradicable “move.” Pavese also recognized it, “Did anyone ever promise me anything? So then, why do we expect something?” We all come into the world with total openness in front of reality, as is evident in the curiosity of babies, but as we grow this attitude is corrupted, such that it is almost impossible to find adults who are not at least a bit permeated by skepticism. For this original move to hold over time, for it not to yield before the toil of existence, one needs to have received a great grace, the one Christians have just celebrated at Christmas.

Is there someone who celebrates this human position more powerfully?
The most exemplary figure before us is that of Benedict XVI. It is difficult to find another personality who has a lucidity of judgment on the current situation and at the same time, without withdrawing into a spiritualism extraneous to reality, continues to challenge everyone, demonstrating how faith can give a decisive contribution to face the challenges before us. We are fortunate to have before us a giant.

But is the Pope an isolated giant?
Like all giants, he needs children. The issue is whether we let ourselves be questioned and illuminated by his testimony, and thus be able to participate in the genius of the giant. To the degree to which the Christian people moves in the furrow of his testimony, the world will see the flowering of people capable of participating in the construction of the common good, starting from the certainty that Christ saves the human person.

How is it possible to share a gaze charged with hope with everyone, even with those who do not profess any religious faith?
We do not have lessons to impart to anyone, but a treasure received to testify to all. We have been chosen in our smallness to bring everywhere the gaze with which Christ looks at women and men. In the degree to which we are enveloped by this gaze, we can make it present to anyone and travel a piece of road together to make the shared living more human. This is shown, for example, in the richness of humanity that accompanies the scores of encounters promoted by the CL communities, starting with the document “The recession, a challenge that calls for change” with the participation of personalities of varied cultural backgrounds.

What should be asked of politics and those who govern us, that their actions may nourish a perspective of positivity?
We cannot ask of politics what it cannot give. We do not expect salvation from it, but that it should create conditions to stimulate and promote initiatives that build the common good, of those who create work, resources, wealth, and spheres in which society can grow.

You meet many young people in Italy and the world: what is your impression?
The issue is that there be adults willing to take seriously their need with a proposal that questions them and challenges them. When they encounter credible witnesses, when the motor of desire is restarted, there emerge personalities who amaze you. Deep down, it is a problem of education: when it finds a channel, their vital energy bursts forth.

Benedict XVI has announced the Year of Faith, as if to indicate the need to return to the roots of Christianity. Is it a counter-attack against the increasingly pervasive secularism and a recognition of how much Christians are losing their roots?
Christianity continues to communicate itself if a new beginning re-happens for every generation. It is like in the family: the fact that the parents are believers is not in and of itself a guarantee that the children will also believe; the move of liberty must spring, a reasonable adhesion to the faith. The Pope feels the urgency of reproposing the essential content of the faith because conceptions have prevailed that have reduced it to discourse, doctrine, ethics, or sentiment. But these reductions do not bear up before the challenges of modernity, which force us to rediscover the nature of Christianity. Today, too, a new beginning is therefore necessary to testify to how reason and freedom find their fulfillment in faith, making evident that Christianity is something that is humanly worth our while. In this sense, the Year of Faith is directed first of all to Christians, but, in the degree to which we live a “new beginning,” it can benefit everyone, according to the method chosen by Jesus: give the grace to some so that through them it can reach everyone who is open to accepting it.

In a few days the School of Community, the instrument of education to the faith proposed to everyone by Communion and Liberation, will begin again. What is the theme for 2012?
In the book, At the Origin of the Christian Claim, the text for this year, there is an extraordinary syntony with the motivations of the Year of Faith. In these pages, Giussani shows the reasonableness of faith through the gaze of those who have participated in that first attempt to “verify,” namely, the shared living of Jesus with His disciples. In the encounter that fascinated them from the beginning because of His exceptionality, the desire to share life with Him was set into motion. Christ continues to propose Himself today through the Church, encountering all our humanity. In an era of bewilderment and confusion like this one, we have reason for gratitude in having received the grace of faith, which is truly the only reason for hoping. The only one that has the sufficient consistence to enable people to breathe fully in any circumstance.