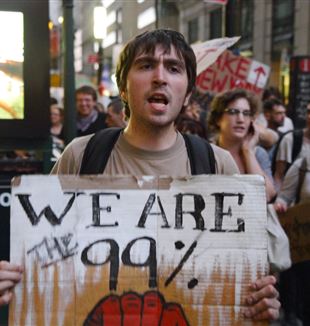 Early on in The Religious Sense, Father Giussani urges us to love “the truth of an object more than your attachment to the opinions you have already formed about it.” The phrase goes beyond an admonition on the virtue of detachment. It makes an unequivocal assertion that truth does, objectively, exist. Much more, it elevates objective truth above the personal that is the political and therefore perceptual apparatus of our age.

Watching almost any current event unfold before us, however, we quickly see how difficult a task Giussani has set before us in a world where even personal opinion, never mind truth, has been diluted by fashion, sentimentalism, and the social media squall. Nowhere has this been made more plain than in the Occupy Wall Street–or #OWS as it was instantly twitterized–protests that began Sept. 17th. Demonstrators had barely begun shouting at the Wall and staking their ground in the heart of New York’s financial district before reaction to their initiative calcified into predictable blocs.

In an era of communication so powerful and prolific that the sound of a newborn’s first heart beat can be transmitted from Ulan Bator to Tierra del Fuego in the blink of an eye, human response to public events has settled in the arid ground between two narrow boundaries: indignation and derision.

The Occupy Wall Street event has proven itself spontaneously fixed in that limited social, political, and media geography. Despite the protesters’ mastery of media platforms, they chant slogans and bark utterances that almost pre-date the telephone, never mind radio. Consider, for example, these words: “We [are] a nation brought to the verge of moral, political, and material ruin. Corruption dominates the ballot box. People are demoralized, public opinion silenced, homes covered with mortgages, labor impoverished, and [wealth] concentrating in the hands of capitalists. The [savings] of millions are stolen to build up colossal fortunes for a few, unprecedented in history....”

Criticism Abounds. They could have come from the 1892 platform of the American Populist Party. In fact, that’s exactly where they come from. But just watch YouTube clips of hyperbolic occupiers speechifying on behalf of the 99% of Americans they claim to represent. They seem to be serving up ready-mix indignation that’s at least 120 years old.

Nor does it help freshen their cause to have as a major mascot the self-regarding moviemaker Michael Moore. Pressed directly by one interviewer on what the occupiers want in place of capitalism, Moore blinked like an owl in an optometrist’s chair and blurted: “Capitalism is evil. It has to be ended.”

Such smoke ring analysis has delighted Occupy Wall Street’s derisive detractors, who, from the beginning, have slighted the movement as little more than a street party for know-nothings, loud mouths, malcontents, and failed freshman political science students.

Criticism–often it’s just sour sarcasm–centers on the absence of leadership, the free-floating existential avoidance of any purpose, and the often abysmal ignorance of those under whose noses the media shoves its microphones.

To whatever extent the criticism is justified, OWS has certainly suffered from the flat falsity that it would become a worldwide movement of the disaffected. Indeed, it’s arguable it has barely left the gate in New York.

“The great thing about New York is how easily you can ignore things you don’t want to be part of. You just avoid that area of the city,” said one young woman I know who works at the Empire State building. “The people they are trying to impress are the kind of people who couldn’t care less about them. Frankly, neither could I.”

If that is true in New York, it is certainly so north of the border where a much-ballyhooed echo occupation of financial districts in Toronto, Montreal, and Calgary was quickly exposed as a) a flop and b) a flop fabricated by the media. After several days of headline blare that made the looming Occupation of Toronto in 2011 sound as ominous as the Occupation of Paris in 1940, a truth-telling columnist for the Globe and Mail newspaper noted that barely 1,000 protesters attended a weekend demonstration. By Monday, writer Margaret Wente said, the number was down to three. The Greater Toronto Area has a population of almost six million. In oil-rich Calgary, columnist Licia Corbella gleefully led a protester through a nose twisting exercise in Socratic journalism. Her questions revealed he believed interest rates are 12% rather than 3%, that the 2008 economic collapse was caused by mortgage rates being too high rather than too low, and that he hadn’t the foggiest about elementary aspects of democracy. While Corbella was kind to the young fellow, you could picture her whispering behind her hand: “Nincompoop.”

Within the comfortable generalities of the predictable positions, though, there has been at least one episode of genuine, differentiated, and significant meaning. Naturally, it has had virtually no mainstream media coverage.

The day after. On Oct. 10th, Slovenian intellectual Slavoj Zizek spoke to the Wall Street Occupiers for about 15 minutes. His speech should be read and parsed for its truth that lies at the heart of what the inarticulate occupiers are trying to say. Indeed, it should be witnessed on YouTube. Zizek can’t be heard so the crowd calls his words out in waves making the sound travel backward to their neighbors. It turns sloganeering into call-and-response liturgy. 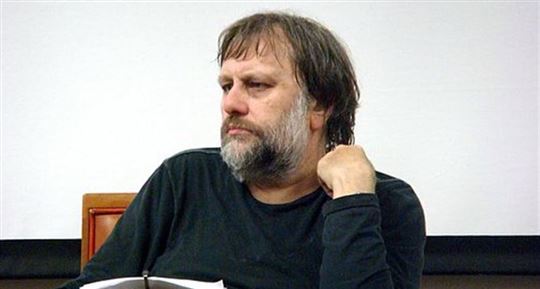 Though he is a contrarian Eastern European Lacanian atheist and recovering Marxist, there is something Giusanni-like in Zizek’s kinetic urging of the crowd to drive deep into the objective truth that is present before them. He warns them to avoid being present just to make a down payment on nostalgia.

“There is a danger: Don’t fall in love with yourselves,” he says. “Remember: Carnivals come cheap. What matters is the day after when we return to normal life. Will there be any changes then? I don’t want you to remember these days like, ‘Oh, we were young... it was beautiful...’ Our basic message is: ‘We are allowed to think about alternatives.’” Zizek, both a world-renowned academic cultural critic and a hugely popular clown prince of social media, tells protesters not to be perturbed by being dismissed as losers and dreamers. Nor, he says, should their concern be simply corruption and greed. Rather, it should be the systemic power that puts corruption and greed ahead of community and freedom.
“Maybe we have to set our priorities straight. We don’t want higher standards of living; we want better standards of living! The only sense in which we are Communists is that we care for the commons: the commons of nature, the commons of what is privatized by intellectual property, the commons of biogenetics. For this, and only for this, we should fight. Communism failed absolutely, but the problems of the commons are here.”

Truth and freedom. Then, Zizek voices what may be the most remarkable words to come from the mouth of a left-wing public intellectual in decades: “The conservative fundamentalists who claim they are ‘really’ Americans have to be reminded of something: What is Christianity? It’s the Holy Spirit. What is the Holy Spirit? It’s an egalitarian community of believers who are linked by love for each other and who only have their own freedom and responsibility to do it. In this sense, the Holy Spirit is here now, and down there on Wall Street are bankers who are worshiping blasphemous idols. You know that people often desire something but do not really want it. Don’t be afraid to really want what you desire.” An essay in Zizek’s 1999 book, The Ticklish Subject, is a complex dissection of Christianity as the Truth-Event of the Cross, Resurrection, and Holy Spirit. Midway through it, he says, “...the Event [Crucifixion] becomes a Truth-Event ‘after the fact,’ that is, when it leads to the constitution of the group of believers, of the engaged community held together by fidelity to the Event. There is thus a difference between an Event and its naming: an Event is the traumatic encounter with the Real [Christ’s Death...] while its naming is the inscription of the Event into language [Christian doctrine...].” While Zizek may not have hit every point he raises on the mark, it repays examining how closely his differentiation of the “traumatic encounter with the Real” and inscribing “the event into language” is to Pope Benedict’s remarks to the German Parliament this past September. “I would like to underline a point that seems to me to be neglected, today as in the past: there is also an ecology of man,” the Holy Father said. “Man too has a nature that he must respect and that he cannot manipulate at will. Man is not merely self-creating freedom. Man does not create himself. He is intellect and will, but he is also nature, and his will is rightly ordered if he respects his nature, listens to it, and accepts himself for who he is, as one who did not create himself. In this way, and in no other, is true human freedom fulfilled.”

What Zizek sought to show his Occupy Wall Street audience, what His Holiness was seeking to remind German parliamentarians, is that freedom comes from discerning Truth as an Event generated by encountering “what is,” that is, the Real, that is, the Holy Spirit, Christ. Language, inscription, description, slogan, and opinion all come later–and always run the risk of descending into sideshow carnivals that, as Zizek puts it, “come cheap.” Or, as Father Giussani would say, that come at the price of an attachment to ourselves so strong we are blinded to even the possibility of genuine love.