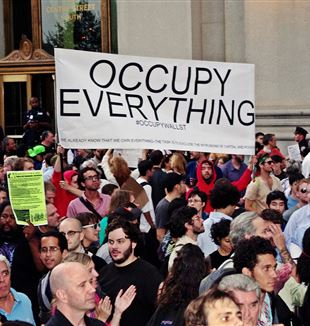 One of the most troubling features of the economic recovery in the U.S. has been the persistently weak state of the labor market. The U.S. unemployment rate peaked at 10.1% in 2009 (a level we have seen only twice in the past 80 years) and it has only declined modestly to 9.1%. Even more troubling are two aspects within the overall unemployment rate. Firstly, the unemployment rate for young adults entering the workforce is exceptionally high, at nearly 20%, levels we have definitively not seen since the Great Depression. Secondly, the percent of unemployed people today that are long-term unemployed (have not had a job for over six months) is nearly 50%–this is twice as high as any economic cycle since the 1930s.

This lack of opportunity to find employment is perhaps what lies at the root of the Occupy Wall Street movement–indeed, the very fact that their protest has taken the form of an “occupation” suggests that this is about young people particularly discouraged by their inability to find work, grow their careers, and build a life for themselves. From a broader macro perspective, at face value, it is easy to conclude that this movement will have little impact on U.S. economic growth prospects. It is neither large enough to make much of a difference to the overall economy nor are their demands coherent enough to integrate into public policy. They seem to protest all kinds of issues–war, corruption, Wall Street, the “1%,” but they offer little guidance on what they think answers their discontent. If these protesters only represented a particularly disenfranchised group in our society which needed some redress in a difficult economic time, then this would be a political problem of solidarity–and, here, the public policy options are fairly straightforward in what we can do to help. However, the Occupy Wall Street protesters represent a very particular demographic–namely, the young–and this suggests that the problem may be deeper.

Engagement with reality. The long term drivers of economic growth are labor force growth (population and immigration) and productivity (education). However, both drivers of growth need an underlying positivity in front of life. What is the origin of our hope? What needs and desires drive our engagement with reality, to build and sustain economic enterprise? If the cultural underpinnings of this engagement have faded, then the solution is not merely about passing yet another bill in Congress.

For these protesters, the question of hope is particularly acute given the political shifts in 2008. President Obama led an all-Democratic Congress from 2008 to 2010 and yet this decisive shift of power to the political left has not generated job growth or income shifts to benefit those that feel disenfranchised. If the source of hope depends on getting your people in power, then these past few years have been particularly disappointing. What drives hope that does not depend on those in power?

The Occupy Wall Street protesters also voice an objection to a seeming injustice in how corporate America is favored over labor. There is this sense that banks and corporations have been repeatedly “bailed out” without a reciprocal sense that the leaders of these companies have been held accountable for the very decisions that required those bailouts. Although the little-guy-vs.-big-guy storyline is a favored storyline for the media, there are, nevertheless, two unavoidable facts that emerge. Corporate profits, as a share of national income, are at post-war highs. Meanwhile, labor income has been steadily declining, as a share of national income. The second fact is that income disparity in the United States is exceptionally high relative to our own history. From a macro-economic perspective, the cultural judgments on the distribution of income matter for future growth. This is not to say that we should become a more “socialist” country or pursue more redistributive tax policies. Rather, it is to say that the very judgments that drive corporate profit share higher and income disparities wider are judgments on the meaning of work.

Like Japan. Japan experienced something very similar to the U.S. two decades ago. Following a huge bubble in its stock market and housing market, the Japanese government responded by relentlessly spending money for 20 years to revive the moribund economy–with no demonstrable success. One of my colleagues used to say that Japan will not seriously change until there are “soup kitchens on the Ginza.” The U.S., like Japan, is a wealthy country and, sadly, could also delay engaging the deeper issues affecting the country. The hope for the Occupy Wall Street protesters is that we, as a society, start to take the needs of our hearts more seriously and stop living off the nostalgia of a certain American mystique and stop looking for those in power to answer these needs.