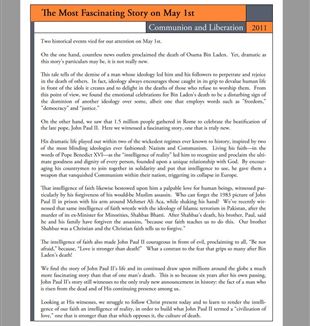 Not long after I awoke on Monday, May 2nd, I found a text message from a friend: "Did you see that they killed Osama? And on the Feast of Divine Mercy? Can you believe it? What a contrast." That was how I received the historic news of Osama bin Laden's death. I had returned to New York the night before from visiting friends in Florida. My thoughts went first to the miracles I had witnessed among them and then to the 1.5 million people in Rome and the numerous messages I had received recounting the beauty of participating from afar in the celebration of the beatification of John Paul II. My judgment came immediately: I do not want to be distracted from Christ's risen presence among us; it is by far more fascinating than the story. The text message continued, "Will you write a flyer?"

I opened my computer and began reading various articles from newspapers and websites across the ideological spectrum. All were reporting on two stories. The first told the details of a "daring" mission to a compound worth millions of dollars, where Osama bin Laden was discovered to be hiding; the arrival of four stealth helicopters; the story of Osama cowering behind a woman, before being shot in the head; his burial at sea within 24 hours in order to be "respectful" of Muslim tradition; and the fact that President Obama had personally ordered this mission. The second story recounted the spontaneous, emotional celebrations in front of the White House, in Times Square, on college campuses, and in cities all around the country.

THE NEED FOR TRUTH. I began to work on the first version of our flyer that Monday morning. Already by the middle of the day, the emphasis of the bin Laden story was slowly shifting. Questions began to surface as to whether the mission had been to capture or to kill Osama and whether he had resisted. It was not clear whether he had hidden behind one of his wives or whether she had dashed in front of him to protect him from harm. At the same time, many people from around the U.S. were sending me messages detailing their own judgments about the situation. In particular, many were deeply concerned about the question of justice, particularly since President Obama had claimed this as the rationale for his orders. The need for the truth of what happened and the urgency of the judgment that justice had not really been done contrasted strongly with the reactions of my students and other teachers I met that day, who most often were simply joyful for what had happened.

That Monday afternoon, I sent the first version of our judgment to a group of close friends. I well remember an address by Fr. Giussani entitled, "Unity: the Law of Knowledge," where he stressed the importance of our unity, in order to come to a true knowledge of reality. In that first version, the emphasis fell upon the fact that the death of one man because of the evil he had done, was not really something new, historically speaking; what was new was 1.5 million people still moved to travel great distances, in order to celebrate the life of one who had died six years earlier.

FEAR AND UNEASE. From my friends, two major points surfaced: first, the fact of the fear that so many were feeling, notwithstanding Bin Laden's death, and, second, the deep unease at the celebrations.

By Tuesday, the story was revolving around disbelief of the news of Osama's death in the Muslim world, demands for photographic evidence of it, and rumors that the White House would provide it. Most disconcertingly, the White House press secretary admitted that he was getting confused as he spoke of the events.

By Wednesday the story revolved almost totally around a (false) report of an impending White House statement that would announce the publication of photos of bin Laden's corpse. In addition, the story broke that his twelve-year-old daughter claimed Osama had been captured alive, but then shot dead. Reports also focused upon why the White House story was so complicated and contradictory. That day, one could sense that not all Americans were enthusiastic about the events that took place in Pakistan. Some began to question the wisdom of the President's decision and expressed dismay at the celebrations. That same day, I heard word of a group of CL university students from Boston College, who were working on a judgment of their own, beginning from the campus-wide celebrations they witnessed all through Sunday night. Thursday morning I found a suggestion from a dear friend, an ingenious contrast: John Paul II's position in front of the ideologies that dominated his life and times and the question of how to face bin Laden's ideology of terrorism. Would ours be a battle of ideologies, or would we use the "intelligence of faith" as an "intelligence of reality," in order to respond to the threat of ideology and the violence it proposes? My heart truly leapt because I recognized how unimaginable the reality of Communism's fall was, provoked by a Polish pope–unbelievable! And yet it happened, as had the miracle of so many people gathering to celebrate his beatification. All Thursday, we worked and reworked our judgment, finally finishing after nine revisions.

On Friday, we published our flyer and sent it to friends, family members, classmates, and co-workers. Since then, a number of people sent me messages with reactions and responses to it. Truth be told, all of the reactions and responses I received were positive. A number of them wrote of a deep unease with the celebrations for bin Laden's death. Indeed, this unease has been slowly emerging among many Americans as one of the principle reactions to bin Laden's death. Now, one often hears that we Americans resembled those in Middle Eastern nations that celebrated the events of 9/11/01. One easily views the truth of the Vatican's judgment. A number of these messages also conveyed gratitude for judgments that people "felt" but could not express themselves. One message in particular thanked us for the reminder of John Paul II's life, stating that he had totally "missed" the juxtaposition. I am grateful for these events because they have been for me a verification of faith. I have witnessed that the intelligence of faith truly grants us a greater intelligence of reality. Then, the urgency of my friends to judge, their passion for the truth, the capacity of our unity to recognize elements of reality to which others remain blind, the gratitude of so many reveal to me "there is a hand that offers it to us now, there is a face that comes forward now, there is blood that flows now, there is a resurrection that happens now."