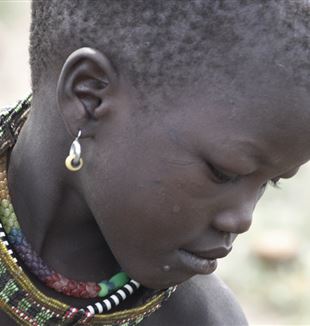 "Hallelujah!" He cries out with a voice laced with an American accent. English has been his first language since 1953, when he left Naples by ship for New York, where he began his priestly life in the suburbs of Los Angeles and Cincinnati. Then, 30 years ago, he stubbornly achieved the "dream" of every Comboni Missionary: to go to "Nigrizia," St. Daniele Comboni's Africa, to bring "the Gospel and civilization," as Father Giovanni Beltrami, one of Comboni's first companions, wrote.

Cesare Mazzolari is the Bishop of Rumbek, the capital of Lake State, one of the ten provinces of Southern Sudan, which voted, on January 9th, by the peaceful means of a referendum, to obtain that independence which has been sought through arms for so many years. The civil war, begun in 1983 and ended six years ago with the Nairobi Peace Agreement, devastated this country, one of the poorest in the world, causing two million deaths, three million refugees, and a compromised future, especially for the South, where the majority of people are animists, with Christians (half Catholic; half Protestant) comprising 25% of the population. The Northern government, with its capital in Khartoum, which has always supported a widespread Islamization (in 1964, the Christian missionaries were expelled, and in 1983 the Islamic Sharia Law was imposed as the State law), is now preparing to lose the most productive regions in terms of oil resources–the region of Central Abyei must decide whether to belong to the North or to the South.

The effects of the bombing and the military raids are still felt by the people today. "Here, people have been traumatized by 22 years of violence: the soldier who shot and killed is left with the guilt of what he has done; children remember seeing their parents slaughtered; a mother remembers the murders of all her children and her husband, drowned in the Nile while fleeing from the bombs," Mazzolari tells us as we visit the "Healing of Healers," a center composed of two buildings where courses are held for healing war traumas. "Over the past eight years, 150 diplomas have been awarded to people now able to be 'healers' of those who still have the bombardments of the Antonov planes in their ears," explains the Jesuit priest Salvatore Ferrao, Pastor of the Church of St. Teresa.

Even in this tragedy, Mazzolari manages to see the light of hope: "Christ is the Word who speaks to us and listens to us; He walks with us as He did with the two disciples on the way to Emmaus. He came alongside them and asked, 'What is troubling you?' After listening to them, he began to speak. Once He vanished from their sight, those two said to each other, 'Did we not feel His words burning within us?'" Here, the voice of that "Sudanese" bishop cracks with an emotion he can't control. "This is the Gospel therapy–Christ. He comes close to us; He knows our problems, and even our loss of hope."

THE POLYGAMIST OF THE VILLAGE. Many would lose their faith if they had to live in the same conditions as the people from South Sudan, given the mixture of poverty and resignation visible on the men's faces, forsaken under the tamarind trees or the lulu trees that dot Rumbek. But this is not the case with this shy but firm 74-year-old man, capable of starting 15 primary schools, each one with about a thousand students. First of all, there is the Loreto School, the first secondary institute for girls around the country: a typically Christian revolution within the dinka culture (a farmers' tribe comprising about 98% of the population), where the girl's or woman's value is measured in cows–that is to say, the number of cows she brings as a dowry. "But if a girl can go to school, then everything changes for her: she understands that she has dignity, that she is not condemned to be the umpteenth wife of the village's rich polygamist," explains Father Fernando Colombo in front of his hut. He is a Comboni priest from Brianza, North Italy, who has spent his whole life in Africa and now spends his "retirement" as an educator for catechists in Rumbek.

THAT SUMMER EVENING. When we visit the Mapuordit Hospital, a secluded place in the vast savannah with a path that leads to a state-of-the-art surgery center, that is 300 kilometers wide, we understand how faith is capable of miracles. We also understand that Mazzolari must get a lot of faith from his prayers, which start two hours before the morning Mass at 7:30 am sharp, attended by five Sisters of Mother Theresa, some youngsters, and other religious people. Here in Mapuordit, in this medical center besieged by needs, electricity is produced by the generators only every other day–but now, everything is ready for the great leap. "The sun, that isn't lacking here–in the warm season, our winter, the temperature reaches 50°C/122°F–,will bring water to all the departments through photovoltaic pumps," smiles a satisfied Brother Rosario, a true Neapolitan, the Comboni missionary who manages this 105-bed hospital.

Our jeep can't go too fast, as there are too many potholes caused by the copious rains of the past days. The savannah seems deserted ("The animals? They fled from the war's racket. Or they have been eaten by the people during the famine.") but, while the vehicle jerks, the Bishop of Sudan has thoughts that spring from a crystalline faith: "I became a missionary because I used to see my mother visiting the sick in my village and my father bringing food to the inmates in the city prison. We breathed Christianity at home. Next to us, there was the Comboni seminary. I was fascinated by the stories of those who came back from Africa. My father, though, wished a future in the restaurant business for me," still today the Mazzolari family business-passion in Brescia. "One summer evening, he was bringing me home on his bike. He asked me if it was true that I wanted to become a missionary. I said 'yes.' He kept quiet. But I felt a tear wetting my head."

Mazzolari dried many tears in Sudan. And he understood that here the Gospel passes through the people's education, the education of those young men–including Santino, Father Colombo's aide–who attend second or third grade at 17 years old because there used to be no schools for them. "Our utmost priority is evangelization, but here in South Sudan we realized that the school is the most complete means to offer a human, social, and Christian formation. We have devoted ourselves in a complete and total way to education, even during the war, with teachers and priests who travelled with the refugees, and even improvised classrooms in the refugee camps. During the war, at one point we had more than 100 schools. Besides the fifteen primary schools [elementary and middle schools], there are four secondary schools, and two schools for art and craft." One of them is the school in Bargel, roughly 80 kilometers/50 miles away from Rumbek (a three-hour trip by jeep, just to give an idea of how they move around at these latitudes). Father Giovanni Girardi teaches the bricklayer's trade to about 20 kids: "If you want to build something here, you need to call people from Uganda, Malawi, or Kenya," grumbles the 70-year-old Comboni priest from Veneto, North Italy.

But the election of January 9th, once strongly desired by the U.S. administration of George Bush and now supported also by Barack Obama, could change everything: "Spirits are high in the South because the people are realizing that they are building peace," explains Mazzolari, a tireless supporter of this step toward the self-determination of the Southern provinces. "Of course, we will have to learn the art of governance, to work for the community, the state administration. But the people know that now freedom is at hand." This is thanks also to the more than 3,200,000 South Sudanese who, between mid-November and December 8th, registered for the referendum vote.

It is late in the evening. The suffocating heat becomes a breeze that slightly lifts the long leaves of the palm next to us. "What we need to bring as Christians is education, the combination of the Gospel directly announced, and an attention to human formation," explains Mazzolari. "We need to establish a sense of honesty, an interest toward the others, and the willingness to act for the common good. But, first of all, we need to bring Christ."