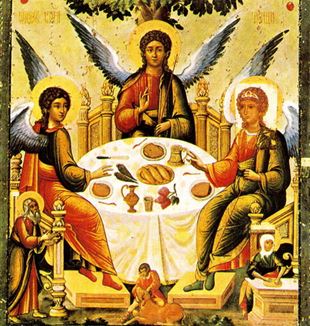 Provoked by the message of Father Giussani on the occasion of the Anniversary of the recognition of the Fraternity, where he asked us to pray for unity between the Russian Orthodox Church and the Roman Catholic Church, we decided to meet with some Orthodox people that some of us already knew. Thus was born the idea of a dinner with them. On Wednesday, February 11th, after assisting at Mass, some of us met at the house of Rick and Chiara for dinner with these Orthodox friends who responded to our invitation with enthusiasm, arriving in a group of 10 (although one of them, John, is a Catholic friend of theirs). The food, exquisite and plentiful, and the wine immediately facilitated the encounter between people who did not know each other very well, if at all.

The conversation became immediately profound and engaging around words such as freedom and reason. Olga, Professor of Russian Literature at Georgetown University, guided us in the knowledge of Dostoevskij’s thought about these concepts and we became aware of the deep affinity between the Russian writer and the School of Community. After dinner, when the vodka helped bring out that which was transpiring among us, Father Mikhail expressed in a toast in a wonderful, synthetic way what we all perceived: “Thank you, because here with you it is easy to speak about Jesus.” This was an event: people who hardly knew each other immediately found themselves united in the recognition of and the love for Christ present. The toasts continued and Father Vladimir underlined with great profundity that Peter and Andrew (whom the Orthodox Church recognizes as its founder) were among the first to encounter Jesus and that they were brothers, and, as such, they probably had disagreements and difficulties, but the fact of the matter was that they were brothers.

The awareness of this unity around Jesus present found adequate expression in singing. They intoned a sweet, popular song, and then Olga chanted Psalm 137 in both Hebrew and Old Church Slavonic. We sang songs of the Movement and they followed us with enthusiasm. At the end, we sang together “Povera Voce” as a prayer. As we parted, the desire to cultivate this friendship to deepen our unity in the love for Jesus was clear to everyone.