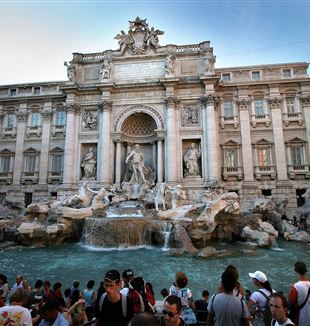 Travelling to The Meeting for Friendship Among Peoples in Rimini, Italy, last August, I had no idea where I was going or exactly what I would do once I arrived. A single word describes what I next encountered on entering The Meeting: energy. I immediately connected with John Zucchi and others from Canada, who were being guided around a series of panels depicting the life of St Benedict and explaining the nature of the Benedictine order. Tagging along and pondering, I began to notice that members of our group knew as much about Benedictine monastic life as did our young tour guide. This became particularly obvious when she began asking them questions about the display. “Oh well,” she finally said with a laugh, “just consider this a do-it-yourself guided tour.”

I pricked up my ears at the sentence, partly because I liked it as a turn of phrase but also because it had very much the sound of a clue. It was exactly that. As the week progressed at The Meeting, I realized that her nine-word phrase encapsulated the entire event. It is a do-it-yourself guided tour of intellectual and spiritual life. The sheer range of subjects offered in the talks, the discussions, the panel exchanges substantiated that. So did the breadth in origin and experience of those both presenting and attending each event on the program. More compelling even than the variety, though, was the possibility and obligation for individual choice.

I have thought a lot about it since, that the notion of a do-it-yourself guided tour provides the perfect descriptor for the twin poles of Communion and Liberation. Balancing these two apparently contradictory forces is the central conundrum of classical liberalism. Morally unhinged answers to the conundrum are, some would say, the corruption at the core of modern liberalism. What I found during the week in Rimini was not just a balancing of communion and liberation, but a bridging of the two ideals in a way that I can think of only as miraculous. Indeed, I would say it was not so much the bridging that made the achievement miraculous but a miracle that made the bridging achievable.

In the weeks since my return from Rimini, I have tried to carry with me this possibility of life. In my work, in my life within the city of Montreal, in my family life, I have sought to be attentive to the way the miraculous bridges communion and liberation, community and individual, my acts and their wider consequences. I am still a very, very long way from having anything definitive to say about what I have witnessed in that regard. But I am travelling and that is a good thing because, in the words of my personal journalistic patron saint, G.K. Chesterton, travel is very narrowing.

In the cliché, of course, travel is supposed to be very broadening because it exposes us to the big, wide world outside ourselves. Not so, said Chesterton. Travel is narrowing precisely because it allows us to look at the isolated unfamiliar until home truths are revealed.

In hindsight, I recognize that the truth of Chesterton’s words began to unfold for me in an incident that occurred before Rimini. The incident took place on a side street in Rome after I visited St. Peter’s. I have always been drawn to Michelangelo’s Pieta in St Peter’s. I stood there in silent communion for quite some time before ending with a small prayer asking Mary to be with me. I was asking Mary to do something for me. She was telling me the doing was up to me. Be with me. Bring me with you. Later that afternoon, as I walked toward the Trevi Fountain, I noticed a young woman sitting on the pavement with a child nursing at her breast. She put out her hand to beg, but I passed by on the pretext that I didn’t have any coins in my pocket. Chagrined, I went into a store to change a bill into coins to give to the young woman. By the time I got back, though, she had disappeared.

As I got near the fountain, I saw her standing outside a store feeding her child bits of what looked like oranges from a plate. I felt like a sucker, a fool, for falling for her faux-poverty routine. She obviously didn’t need my money if she could afford a plate of fresh fruit. She disappeared into the crowd by the time I reached the spot where she’d been standing, but I went inside to ask the shopkeeper if she knew the young woman. “Is she really poor?” I asked. “Of course she’s poor,” she said. “She has nothing. She’s a gypsy. She has to beg for her whole family.”

I took some money out of my wallet.

“Give her this,” I said to the shopkeeper, “the next time she comes around.”
In a small act of individual free will, I found a moment of communion. In the middle of the bridge between the two is Mother Mary. Bring me with you, she said. And I have. From Rome to Bologna to Rimini to home.