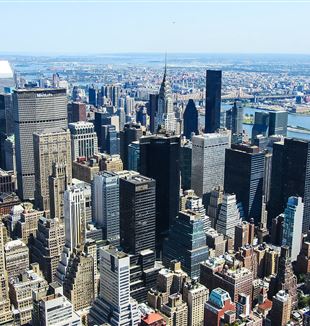 Our first Happening in Washington, DC, was a simple, yet truly dramatic, evidence that a new people is being born in the USA, exactly as Fr Giussani foretold several years ago–a people proclaiming Christ’s passion for man. The theme was that searing question of the Psalms, “Is there a man who loves life and longs for happy days?” Fr Rich Veras, a parish priest from New York, remarked that this insatiable and “shameless” desire for life is at the core of man. This desire is the evidence of God. But, Fr Rich said, in the face of our limits, reality disappoints us and we often settle for less. We squelch our desire.

What is it, then, that awakens this desire? Once we meet a person who loves us, then freedom comes into play. Fr Rich emphasized that when we see something that promises more, we are provoked with the freedom to say “Yes,” like the Virgin Mary, or to turn away in suspicion and fear. In the faces of his friends in New York, in a tangible way Christ’s face became visible through their features.

The great drama of God’s desire to be acknowledged by man is played out in our human companionship, where God reaches us. We came to the Happening, Fr Rich said, with this same desire to be acknowledged, and encountering an answer in these human faces, we are awakened to the understanding that reality is positive. This positivity is the true starting point for facing even the greatest suffering. He pointed out that God did not preserve Mary from suffering, yet her hope could not be killed. This is a maturity that goes to the depth and truth of things. But, Fr Rich concluded, we need to be reminded every day that this apparent nothingness in us can be won over by a companionship that embraces us in the name of Christ.

We then heard three very different stories that illustrated this friendship that grasps man’s heart.

Michelle, a teacher from Maryland, described the surprising events that unfolded at her Catholic high school last year. Initially, her students had expressed their dislike for her, but as they came to realize that their questions about life could find answers in her class. An unexpected friendship resulted. Michelle stressed that this was made possible first through her friendship with the other high school teachers in the Washington community who meet weekly to discuss and live their vocation together.

Kathleen, who had traveled with several others from the Tampa, Florida, community to the Happening, also described a year of transformation. Her struggles with the Movement, with seemingly incomprehensible readings and unreasonable commitments, were further exacerbated after a falling out with one of her friends. But then another friend recalled her to the origins of the relationship that had grown so strained. This step rekindled the relationship and affirmed the truth of that original attraction. This new beginning was strengthened by the weekly School of Community. A freshness entered her life as a wife and mother and, in her work as a nurse for terminally-ill patients, she was able for the first time to truly embrace them at the level of their shared destiny.

Rob from North Carolina then spoke about his desire for a companionship that could tear the nothingness out of his heart and how the answer to this desire took an unexpected shape, as evidenced in two events. First, he met a new friend, Joshua, an inmate at a nearby prison who had met the Movement through Traces. Rob described Joshua’s insatiable desire not to be crushed and forgotten in prison and the answer to this begging in the encounter with him and the friends of the Movement. Second, Rob had learned, while in Italy in August, that his wife (at home) suddenly needed surgery. Distraught not to be with her, he was comforted by those who spontaneously gathered for a rosary. Back in the US, friends from several communities traveled to North Carolina to accompany his wife. Thus, Rob saw how the Lord gave him a people to walk with.

The hope nourished by the events of this day was an evident answer to our hearts’ desire, and so our prayer to the Virgin was that this hope becomes fecund, in the hands of a good Father, through our small presence in this great land.