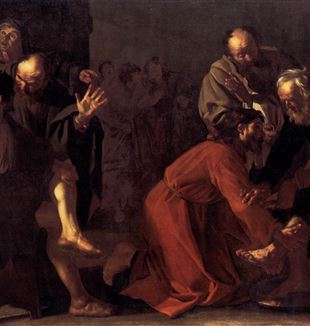 I really wanted to write today, because I have just returned from visiting Mado. No! Mado is not a place, nor a little boy. Mado is a 10-year-old girl whom I had to put in the hospital because she kept getting worse and worse. And I met Dr Bamgura, a very good doctor. When Mado saw me, she hugged me with those big eyes of hers peeping out of an enormous collar that is supposed to help her not to get twisted up in herself even more. She wanted to show me that now she could eat by herself without being spoon-fed. With her left hand she tried to bring the lollipop I had given her to her mouth, but she couldn’t do it. In her enthusiasm to show me how good she was at it, she had tried with the wrong hand. She threw me a smile to tell me to wait, and passing her hand behind her back, she took the lollipop with her right hand and with it managed to get the lollipop into her mouth. Mado cannot talk, but she understands everything and knows how to make herself understood.

“ Come on, try!” I made a sign to indicate that I wanted her to try to pass the lollipop from one hand to the other in front of, not behind, her back. She bent down almost to the ground so that her two hands could touch, and managed to pass the lollipop, then laughed in satisfaction. But what she wanted to show me was that, after so long when she had been swallowing her food directly, she now could chew.

Learning to Chew
Mado was brought to me from a refugee camp. She too was a war child who, if it had been possible to intervene earlier–much earlier, because she was not born like this–maybe could have been treated, but what could they do at the camp?! So she continued to get worse. Now she wanted to thank me by showing me she could chew, that she could carry her food to her mouth by herself. When she was brought to St Michael’s, she was fed in bed. The food was put in her mouth sitting up, then she was made to lie down so the food would go down toward her throat. She would turn it over and over again in her mouth to wet it thoroughly with saliva and then, once she had swallowed it, up again for the next bite. I never saw her angry because of her condition. She was always smiling, as though everything were normal, and she turned her deformity into a game, challenging her friend Salam to a race. He with polio, she deformed… they would fall down, running in the sand, and laugh at each other. Mado does not know how to talk, but she tells you what she wants anyway. When I would go back to St Michael’s, she would ask me for candy. “I don’t have any,” I would tell her, and she would take me by the hand and pull and pull until she brought me to someone selling it. She could answer only “Yes” and “No,” and one day she made me understand that yes, she went to school, but no, she didn’t write with her right hand… she was left-handed!

“ You,” and I twisted myself up to imitate her condition, and she laughed and laughed. “You… always like this?” And by shaking her head she told me, “No.”
“ Yesterday,” the person caring for her said, “she asked me for eggs.” “How did you understand her?” “She said, ‘Eggs,’ and if you listen carefully you can hear the sound in the back of her throat.”

“ Of course!” I thought to myself. “I have seen people who put a microphone to their throats to make themselves heard.” I hope that, as the years pass, Mado will not miss this opportunity.

Like All the Other Kids
Sooner or later I want to hear her talk with a microphone, because Mado has a voice. She sings in church, and her voice is in tune, but she doesn’t know how to shape the words, so all she sings is aaaaa to the notes of the music. She has never given up, and when she held the note a little too long and found herself alone with her aaaaa, she was the first to burst into laughter that infected the whole congregation.

Sometimes people ask me what I will do with St Michael’s, now that there are no more child soldiers. To tell the truth, I still have a good number of ex-soldiers around me, even though the program has been declared terminated. The case is similar with the unwed mothers, and then there is Mado, whom everyone expects to go back “home,” and others like Mado: little Obila who is severely handicapped, and Salam, a polio victim who threw his crutches away because he wants to be like the other kids…. And then he set out to dance, and he did dance… with more than one false step and a fall or two to the floor. On Good Friday, he determined to take part in the Way of the Cross, and here it is not a question of walking from one door of the church to the other. When they told me where they intended to start their journey toward the church, I wanted to call in sick. Under that hot sun, at three in the afternoon–off and down through the rice field and up the hill and around and around. “Salam,” I said to him, “with your foot, you’ll never make it.” “I’ll start ahead of time!” was his answer. We met him halfway on the road, and he gave me a smile that said, “Well, who’s dragging their feet here?!” And he threw me a look of compassion! I baptized him at Easter. Forty-six were baptized this year! For a community that started out with twenty refugees, this was truly a great grace.

Some of the children have to go regularly to the hospital run by Emergency (a real blessing, with truly competent and dedicated personnel… and it’s all free) to have their war wounds treated. Because of a lack of immediate care, the wounds have turned into osteomyelitis and require prolonged treatment. Every morning they set out in the old van for their hospital treatments.

Life is So Beautiful
St Michael’s is alive, and how alive it is! But it is always a place of “transit,” because the final goal is the family. The number of CL Movement families involved grows constantly, and a little village of improvised huts is growing up at Mayenkineh, with its school, still made of tin sheets–but very soon, with the help of AVSI and La Traccia (a school complex in the province of Bergamo, Italy), it will all be transformed. The project is signed and sealed, and will soon give me the consolation of saying, “This too is done!” Then we will be able to concentrate on the interior, where they are asking us to come. And why not! With a thirty-year plan, with a contract with The One Above that should last until 2032 (and is renewable!), everything is possible.
The problem is that here, things move too slowly, and with all there is to do, we are too far behind with the work, and if things go ahead like this… our contract will be extended and… we won’t die… which is not such a bad thing, because life is so beautiful!