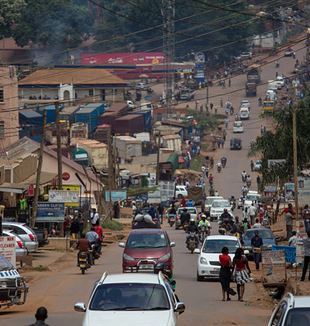 She calls it “the trick Jesus played on me.” Her marvel is understandable–it was not easy to imagine, years ago, that one day she would board an airplane and fly from her homeland of Uganda to the chaos of New York to receive, amidst applause, a prestigious prize reserved for promoters of peace.
But at the same time, there is perhaps no form of recognition that describes Rose Busingye better than the one she received in the United States: the Servitor Pacis Award, the prize for servers of peace. Those who, like Rose, dedicate their lives to alleviating human pain, but above all to helping every person recognize the meaning of their life, serve peace every day more profoundly than an entire contingent of UN Peace Keepers.

To Sustain Hope
A familiar face and companion on the journey to Traces readers for years, Rose was one of the guests of honor at the annual ceremony for the presentation of the awards given by the Path to Peace Foundation. Every year the foundation awards prizes to protagonists on the world stage who sustain human hope by their works. Presenting the award to Rose was the Permanent Observer of the Holy See to the United Nations, Archbishop Celestino Migliore, President of the Foundation, during a ceremony on a magnificent boat anchored in the Hudson River.

To the audience in New York, Rose briefly described her work, the activity of the Meeting Points in the slums of Kampala, Hoima, and Kitgum, the hospitality house, her relationship with the some 600 victims of AIDS and HIV registered with the Meeting Points, and with the hundreds of people, especially orphaned children, who gravitate around them. “What I do is what I have learned in a friendship,” Rose said. The friendship is Communion and Liberation, present in Uganda for more than thirty years. Thus Rose’s prize was not given to a solitary hero of philanthropy, but to the presence of the Movement as a factor of hope and peace for all. “I consider myself to be a shoulder to lean on for anyone who wants one, and everything I do–the projects, the collections of food and medicine–is an instrument for telling man about his greatness, for reminding him that what makes him great is his relationship with God.”

Not the Illness but the Person
During the same days that Rose was in New York, the President of Uganda, Yoweri Museveni, was the guest of the White House just a few hundred miles south, in Washington, DC. Museveni recalled that Uganda’s program for the fight against AIDS is based on the so-called ABC rule: Abstinence, Be faithful, use Condoms. Rose’s program is simpler, but at the same time of vast import. “When I meet a victim, I am not interested in the illness, but the person. A person is not treated in sections; touching one part of him implicates the whole organism. What comes first is helping him to rediscover his dignity, in a relationship.”

The evident contrast between the glittering city of New York and its gala black-tie dinners and the poverty of the slums of Kampala does not bother Rose. “The problem is not whether you are rich or poor, but understanding who you are. People who live in a mud hut can be happier than in a skyscraper. And for me, learning who I am meant discovering the beautiful. This is why I am moved and want to sing when I see a New York sunset.”