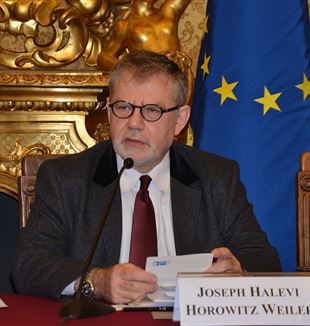 Professor Weiler, in your forthcoming book, A Christian Europe, you speak about the European Christian ghetto. A Christian ghetto? Are you serious?
Well, it is of course a provocation and the term is used as a metaphor, but it is a provocation rooted in a sad and frustrating reality, and the metaphor is necessary to jolt people out of their complacency. The manifestations of the external walls of this ghetto are very much in evidence and were much discussed recently. I refer to the refusal to include in the Preamble to the European Union Charter of Rights even a modest reference to Europe’s religious heritage. In the recent draft Constitution there is still no reference to Europe’s Christian heritage–but a generic allusion to its religious inheritance tucked between the cultural and the humanist…! This, of course, has all been noted and has been the subject of varying degrees of indignation. But does it come as a surprise? Is it so shocking? And is the community of faithful Christians without fault in this matter?

Do you have any explanation for this failure?
I can only speculate. I interrogated many Catholic friends and colleagues in several European countries and asked about this. I draw three possible explanations.

The first is a puzzling internalization of the false philosophical and constitutional premise of the most extreme forms of laicità (secularity) as practiced for example in France. Freedom of religion is of course guaranteed, as is, and rightly so, freedom from religious coercion. But on top of that there is the steadfast conviction that there can be no allusion or reference to religion in the official public space of the State–for that would transgress … well, what? There is the naïve belief that for the State to be assiduously secular is to practice religious neutrality. That is false on two counts. First, there is no neutral position in a binary option. For the State to abstain from any religious symbolism is no more neutral than for the state to espouse some forms of religious symbolism. The religiosity of large segments of the population and the religious dimension of the culture are objective data. Denying these facts simply means favoring one worldview over the other, masking it as neutrality.

You said it was false on two counts?
Well, to accept that view of the relationship between State and religion is also to accept a secular (18th-century) definition of what religion in general and Christianity in particular are. It is a vision that derives from the culture of rights which treats religion as a private matter by equating freedom of religion with freedom of speech, of belief, and of association. But can one accept that Christianity be consigned to the realm of the private by the secular authorities of the State? Do not get me wrong; I believe in the liberal constitutional order with its guarantees of democracy and freedom. But I believe in a vigorous and articulate religious voice and viewpoint in the public spaces guaranteed by our constitutional democracies.

It seems to me that many Catholic scholars have confused the public disciplines of constitutional democracy with a private discipline of religious silence in the public sphere. And worse, Christian scholars have internalized the notion that to integrate Christian thinking and Christian teaching into their reflections on constitutional law, on political theory, on social science, is a betrayal of their academic standing, of their objectivity, of their scientific credentials.

Are there other reasons?
Another reason is fear; yes, fear. Fear that in an academy that is dominated by an intellectual class which often leans to the left or to the center-left, an incorporation of Christian insight (other than a study in scientific fashion of religious phenomena) would brand the scholar as lacking in scientific objectivity; of not being a “free thinker.” And thirdly, and I hate to say this, there is ignorance. Yes, plain and simple ignorance is another factor. How many in the intellectual classes have read, have studied, have reflected on the teachings of, say, this current pontificate–with an unusually profound Pope–the encyclicals, the apostolic letters, etc, with the same assiduousness that they study the latest offering from the secular intellectual icons of our generation? Yes, it is shocking that the explicit request of the Holy Father was denied by the Convention; but to me it is even more shocking that the call of this pontiff to the laity to be the messengers of Christian teaching in their own private and professional lives goes in many cases equally unheeded. The lives of those touched by faith cannot, once they exit the sphere of home and family, become identical with those not touched by faith. This is true for the shopkeeper in the market, for the conductor on the train, for a minister of the republic, and also, yes, for those whose work is in one way or another a reflection on the public policies of public authorities.

What, then, in your view, is the relevance of Christianity and Christian teaching to the narrative of European integration?
There is, first, the question of identity. It is simply laughable not to recognize Christianity as being a hugely important element in defining what we mean by European identity–for good and for bad. In art and in literature, in music and in sculpture, even in our political culture, Christianity has been a leitmotif–an inspiration as well as an object of rebellion. There is no normativity in affirming this empirical fact. There is only normativity in denying it.

But what has this got to do with European integration?
A great deal. The narratives of history such as the story of European integration have no inherent meaning. They have the meaning we give them. What is at stake is what meaning we want to give. A Christian Europe is not a Europe that will endorse Christianity. It is not a call for evangelization. A Christian Europe is one that can learn from the teaching of Christianity. To reflect, discuss, debate, and ultimately assign meaning to European integration without reference to such an important source is to impoverish Europe. For lay people and for non-Christians, this becomes a challenge to match. Christianity today offers interesting “takes” on the central issues, the core issues, the deepest challenges in the very self-understanding of what Europe is about. Here are some brief examples, some antipasti, to whet the appetite.

The relationship to the “other”–within our society, across our boundaries within Europe, and beyond Europe–is arguably the most important challenge to which European integration tries to respond. Redemptoris Missio is a profound statement on how to think, to conceptualize a respectful relationship with the other. On the one hand, bravely, it eschews the epistemological and moral relativism of post-modernity by affirming that which it considers to be the truth. Indeed, its Truth. At the same time, it treats with the utmost respect those who do not share in that Truth. One cannot truly respect the other if one does not have respect for oneself, individual and collective. Much can flow from this insight in the various debates of Europe on these issues. The marketplace is another core issue of the European Union. Some would argue that it is “the” core issue. Centesimus Annus offers one of the most profound reflections on the virtues of a free market but also of its dangers to human dignity. It is a reflection that goes well beyond the mantra of “solidarity” which one finds endlessly in the debate of European integration. Europe need not espouse the teachings of the Church in this matter. But why exclude them from the debate? And there are many other examples, which will be developed in the book.

How would non-Christians–say, Jews and Moslems–react to the notion of a Christian Europe? Are you arguing for the exclusion of Turkey?
A Christian Europe does not mean a Europe for Christians. It does not mean an official endorsement of, or call for, evangelization. That is not the role of the European Union. It means, as I have explained, a Europe that does not deny its Christian inheritance and the richness that public debate can gain from engagement with Christian teaching. There is something comic (or perhaps tragic) in observing those most opposed to any reference to religion or Christianity in the draft Constitution at the forefront of opposition to Turkish membership in the Union. It is, in my humble opinion, an insult to Christianity and its teaching of grace and tolerance to claim that there is no place in Europe for a non-Christian country. As for the Jews, I am an observant Jew, son of a rabbi with European roots that go back hundreds of years. In those years, we have often been the victims of, yes, Christians and Christianity. Why would anyone fear the recognition of the dominant culture as, well, dominant? If I have a fear, it is the following: to deny the relevance in European public symbolism and European public space of the Christian heritage is to deny, too, the relevance of my religiosity in that same public space.