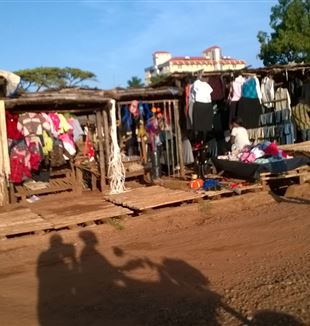 “Lacor’s bright star has vanished,” was the headline in The New Vision, one of Uganda’s most important newspapers, a few days after the death of Dr Piero Corti, an Italian medical missionary who was 78 years old, 40 years of which were spent here in Uganda. Dr Corti was and is considered a national hero, and on Easter Monday, the day after his death, all the Ugandan radio stations and newspapers announced the sad news. His body arrived in Entebbe, Uganda, from Italy on April 23rd and was commemorated for three full days by relatives, friends, doctors, acquaintances, the highest ecclesiastical and civilian authorities, representatives of Italy and especially of his beloved Acholi people, who held a wake of a day and a night before burying him inside St Mary’s Hospital, the hospital founded by the Comboni Fathers but developed by him. Now he rests alongside his wife, Lucille Teasdale (a Canadian surgeon who died in 1996 of AIDS, contracted during the thousands of operations she performed in Lacor Hospital during the years of guerrilla warfare), and Dr Matthew Lukwiya, superintendent of the hospital, who died of the Ebola virus in 2000. The funeral was deeply moving, with official ceremonies, prayers, wakes, local dances and songs, and above all the participation of thousands of people. For the occasion, a group of dancers danced the Myel Lyel to the beat of a drum, a ritual reserved only to Acholi tribal chieftains. In his homily during the funeral in Gulu Cathedral, Archbishop Odama recalled that Dr Corti, despite his severity, operated precisely as Jesus says in the Gospel: “As you did it to one of the least of these my brethren, you did it to me” (Mt 25:40).

Education and Passion
A Christian education as openness toward the world and probably an innate passion for Africa led Dr Corti, who earned specializations in pediatrics, neuropsychiatry, and radiology, accompanied by his future wife, Lucille (whom he met in Canada) to decide to leave for Africa and work in a small dispensary run by the Comboni Sisters in Gulu. Thus, year after year, with great sacrifices and significant help from friends and relatives in Italy, and later supported by the Lucille and Piero Corti Foundation, they succeeded in creating a missionary hospital, St Mary’s Lacor Hospital, with about 570 beds, offering about 200,000 outpatient examinations and approximately 25,000 hospital stays each year, in a rural area of northern Uganda, the land of the Acholi and of rebels, tormented by AIDS and already famous because of the Ebola epidemic.

Devotion to the Sick
What strikes the visitor to Lacor Hospital, besides the cleanliness and efficiency of the wards, is the devotion that the entire hospital staff shows to the sick. It seems that the saying, “Our vocation is to try to save lives,” which Dr Matthew used to repeat often during the hard work to contain the Ebola epidemic, has penetrated many of them deeply. Dr Matthew’s devotion in facing the hard work of a medical doctor in this remote corner of Africa was transmitted to him by Piero Corti’s example, as The New Vision emphasized, quoting the Archbishop of Gulu, “He deeply loved people, as could be seen by the way he exercised his profession as a doctor. He loved Uganda to the point that he did not want to leave it during the difficult period of Amin’s dictatorship or the recent rebel war.” Indeed, even when the war had become harsh, and the Italian embassy asked all Italians to return to Italy–which would have resulted in the hospital’s closing–Dr Corti refused and remained among those he considered his people, the Acholi, so that now he is considered one of them. Now the great challenge that falls to all of us who work at Lacor, whether for short periods or permanently, is to continue the work begun by its founder, maintaining the original missionary spirit, which is an essential dimension of the Christian experience. As St Paul says, “If I give away all I have, and if I deliver my body to be burned, but have not love, I gain nothing” (1 Cor 13:3), because without love the work of a “lay missionary” risks becoming the end and not the instrument of his action. Dr Corti, as his obituary said, has “fought the good fight, he has finished the race, he has kept the faith” (cf 2 Tim 4:7).