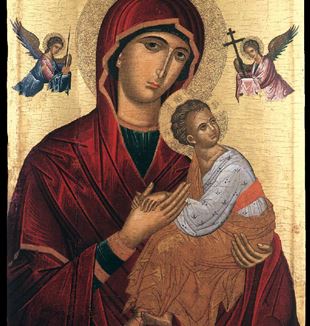 Because this is the year of the Rosary, I’ve been telling everybody to make sure that as they walk through Lent and as they walk through Holy Week, they walk with Mary. Since you had that very beautiful reading from St John on the Lord’s last discourse at the Last Supper, maybe we can talk a little bit about it.

Let us begin with a question. Where was Mary during all this time of the Passion? Where was Our Lady? Where was she last Sunday when He came, triumphant, into Jerusalem, sitting on the donkey, with everybody waving at Him and everybody so proud of Him, and everybody so pleased with Him? It’s the same crowd that’s saying, “Crucify Him, crucify Him” in today’s reading, reminding us that the world’s applause really means nothing, and that the only applause that is important is God’s smiling face when He says to us, as He said to the lawyer in the Gospel, “You are not far from the kingdom of God.” That’s the only applause that ever really works; that’s the only applause that ever really counts. But Mary was there, I’m sure, when He came into the city. She was there. She wasn’t waving and shouting, probably; she was just watching. I’m sure their eyes caught one another and He smiled, and her eyes said, “Good, I’m glad that you’re doing this, but I know that this is the beginning of the end. I know that this is what I promised more than thirty years ago when the angel came, because God told me that I was going to suffer, and be a woman of sorrows when I bore you. I said to Him, ‘Be it done to me according to Thy word,’ knowing that a day like this would come. I see them, I hear them shouting for you, and I know that the shouts will die, and you will die too at their hands.”
After the great procession of Palm Sunday is over, and before He goes to the Last Supper, does He see his mother? Oh, I’m sure He does. How could He not? How could He not come and spend some time with her, sitting there in the garden somewhere in Jerusalem, or in Bethany? And what did they say to each other? He said to her, “Mother, you know it is time.” And she said, “I know; I’m not happy about it, I worry for you, I’m terrified.” And He smiles and He says, “You started it all at the wedding feast of Cana. I told you it didn’t have to be now, but you smiled and said to the waiters, ‘Do what He tells you,’ and by those words you began this whole drama, and rightly you did, Mother, because you then began the drama of the salvation of the world.”
Does He tell her that He’s going to be betrayed? Probably not. Does He tell her that on the vigil of the Passover He’s going to gather the apostles together and give them the last instructions? Probably. And does she say to Him, “Are you going to talk about the Father?” (Because I’m sure as He was growing up, that was the great conversation that Joseph would be involved in also–the Father, to talk about the Father, the Father that He knew, the Father that He came to know more and more as He became wiser, as He became older; the Father that He began to appreciate when He was twelve years old and lost in the temple; the Father to whom He is so close.) And Mary smiles as He says, “Yes, I’m going to talk about the Father.” And Mary smiles as she says to Him, “They won’t understand, you know.” And He smiles back and He says, “I know they won’t. But there’ll come a time when the Spirit will come. I’ll send the Spirit, and the Spirit will instruct them, and then they will know.” Then He looks at his mother and He says to her, “You will help them to understand, won’t you? Because you will be there.” And she says, “Yes, I will help them to understand.”

I could go on for hours on this unique and wonderful, miraculous, mysterious relationship between our mother, who is God’s mother, and her son, who is our Savior. But let me just take that and put it into our own lives. He tells us so many things and we don’t understand, either. I have spent all my life trying to understand. You don’t understand the mysteries; they are not to be understood this side of the vision of his face. And yet He has sent us the Spirit, even though we do not understand how God could love us so much, even though we don’t understand how God could exemplify for us the virtue of humility, which we saw yesterday in the Gospel when He kneels before us and washes our feet.

We can never understand that; we can’t understand God’s love. We don’t love–I don’t love that way. Maybe you do, but I don’t love that way. I don’t love that totally, that selflessly, that generously, that abundantly; I don’t love like that. He does. God loves that way, and we will never understand until we see Him face to face–we’ll never understand why He loves us that much. But the Spirit will show us that it’s all right not to know that, as long as we believe it, as long as we live in the understanding, in the belief–in the faith–of that love, and Mary will help us too. That’s another reason why I tell this story, because it is important that we see in her the Seat of Wisdom, and in times of sadness, the Cause of our Joy; in times of difficulty, Virgin Most Powerful; in times of worry, Mother of Good Counsel. In times when we need her most, she is there, our hope, the Morning Star, the Star of the Evening… All those things that the poets have said of her–they’re true: she’s there, because He wants her there, and because we need her there.

And so as you begin a road today that is a road of symbol, a road that will lead you to the cross, remember two things: First, that you don’t walk it alone, because having been crucified, He now comes back to carry your cross along the same road and stay with you every minute of the journey. And second, that it is his love that gives you the strength to carry whatever He asks you to carry; his love that gives you joy in doing it. That’s why we call this Good Friday, because somehow in this day we try to see how good He really is. Amen.