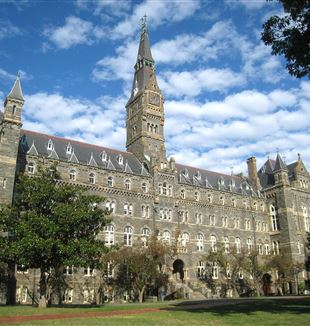 If we are disposed to acknowledge a symbolic value to certain institutions, no site seems more meaningful and appropriate for a study seminar on Fr Giussani’s The Risk of Education than Georgetown University in Washington, DC. Located on the banks of the Potomac River, right in the heart of the center of political and economic power that many today are calling the New Empire–one that, however, Fr Giussani said recently, has been able to guarantee historically “the possibility for an education that truly saves the desire for peace and justice”–Georgetown is the oldest Catholic university in the United States. It was founded in 1789, right after the Revolutionary War, by Jesuits under the leadership of John Carroll, the first Catholic bishop in the United States. In the risky enterprise–one still today heavily marked by discrimination–of establishing the Catholic Church in the United States, Carroll conceived of education as an absolute priority, the means for solidly “anchoring” the Catholic presence in American society and the most valuable service the Church could provide in that particular human context. The Catholic educational institutions in America have not always wanted to or been able to remain faithful to Bishop Carroll’s insight. As the result of a historical and cultural evolution that has favored the assimilation of terms dictated by the Protestant mentality and ethos, in Catholic schools as well the Christian thrust of education has been relegated for the most part to the personal or spiritual dimension, in the most individualistic and moralistic sense of the term, in line with the established dualism between faith and reason, morality and knowledge, private and public. American universities today, religious and secular, share a basic approach that combines the extreme specialization and fragmentation of the disciplines with an absence of a unifying hypothesis, an absence that is not only accepted as a fact, but theorized. As Alasdair MacIntyre observed recently, “What the Catholic faith confronts today in American higher education and indeed in American education more generally is not primarily some range of alternative beliefs about the order of things, but rather a belief that there is no such thing as the order of things of which there could be a unified, if complex, understanding.” In this context, the proposal of The Risk of Education appears with all the connotations of a radical challenge, a challenge that was taken up with a sense of commitment and intellectual precision. Participants, forty scholars and teachers from some of the most prestigious American universities, also exhibited an extraordinary willingness to put themselves personally on the line. Stanley Hauerwas, a Protestant of the Methodist faith and a professor of ethics at Duke University, recently called by Time magazine the most important living American theologian, opened his talk by saying that, after reading The Risk of Education, the only thing that he really minded was that he did not write it himself. The careful attention with which he had read it was immediately evident by the acute and efficacious judgments he expressed. But, overall, in all the remarks, the three main papers by Hauerwas, Scola, and Tillman and the ensuing debates, which were rich in observations and questions, the very high tenor maintained by the discussion was directly proportional to the awareness of the objective force of Fr Giussani’s proposal for education, in its ability to face and judge the crucial points of the contemporary debate, the questions that really matter on both an existential and a more purely theoretical level, in accordance with a unifying, critically systematic, and radically innovative perspective. Perhaps the most surprising aspect that emerged during the seminar was the realization that certain fundamental categories, certain terms like experience, verification, freedom, tradition, and friendship, so close to the American sensibility and yet so diminished and deformed by now as to be almost unacceptable (both in common speech and in philosophical language), in the approach taken by The Risk of Education recover all the depth and attractiveness of a human proposal that is fascinating in its reasonableness. They design the face of an education that once again becomes possible.