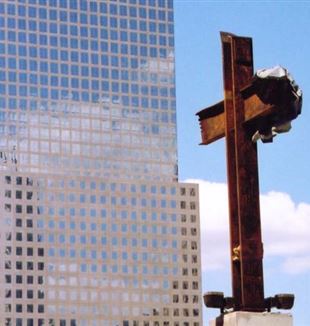 How can you say, “Woman, do not weep,” to Jean Palombo, who saw her firefighter husband for the last time on the morning of September 11th, 2001, and whose last words to her, after she gratefully acknowledged his morning help in getting their ten children ready for the school day, were, “I will always help you”? How can you extend this same affectionate exhortation to thousands of mothers, wives, sisters, daughters, who on September 11th of this year crowded into Ground Zero, on a sunny windy day with the dust of death blowing in the air, come to weep in this burial ground in the midst of the skyscrapers of world finance?

The Steel Cross
You can try by starting from a proposal of hope as a “certainty in the future based on Christ present now,” as was written on the posters and flyers distributed by CL in New York in the days before the anniversary of the attack on America. This phrase accompanied the gesture offered by the New York community to the city scarred by terrorism: an afternoon of singing, readings, and testimonies (including that of Jean Palombo) in St Peter’s Church, a short distance from Ground Zero. This was another event under the banner of the Cross, just like the one last March, the Way of the Cross which brought 3,000 people from Brooklyn to this same ancient church, now orphaned by the collapse of the nearby Twin Towers. This time, the Cross was not the little wooden one carried in procession across the Brooklyn Bridge, but the gigantic intersection of two steel girders that looms over the work site of Ground Zero since last October and provides a focal point in the midst of a panorama of devastation extending over sixteen acres. The steel cross which was once a piece of the World Trade Center and now rises in Church Street, a few steps from St Peter’s, was chosen as the image to present the memorial service organized by CL on September 8th, the Sunday before the anniversary. And the man who discovered it, Frank Silecchia, a construction worker who labored for ten months among the ruins of the Towers, was another of the witnesses who spoke.

More than 1,000 people took their place in St Peter’s, among them many tourists “dragged away” for an hour and a half from the sad pilgrimage among the souvenir stands that now crowd the area of Ground Zero, which has been transformed into a sort of New York version of the Roman Forum, with guided itineraries through the ruins left by the barbarians of the twenty-first century. All of them received a 40-page booklet that opened with Msgr Luigi Giussani’s prophetic words pronounced last August 24, 2001, eighteen days before the world became something different from what it had been until then. Giussani asked what could give man security in “days of upheaval, some of it violent, throughout the world,” in a reality where “violence seems to corrode relationships and actions.” He then answered by placing in the forefront “the inexorable positivity of reality,” which enables us to “stay calm even during the storm.”

It is the same kind of reassuring peace that Frank Silecchia felt on September 13, 2001, while with some firefighters he was venturing forth into the ruins of the World Trade Center. That day they still hoped to find survivors, but after several hours of work they had only come upon three bodies, which they brought to the surface with great difficulty in large plastic bags. Frank was worn out and torn apart by so much destruction. “I don’t know what hell is like, but I imagine it as a place like this,” he said one of the first times he met members of the Movement in New York. Looking for a place to get his breath, Silecchia had groped his way into a gigantic atrium that was once Building 6 of the World Trade Center, and here, by the light of his flashlight, in absolute silence, he saw the cross, planted vertically in the midst of the rubble. “Behind it,” he recounted, “were two other smaller crosses made of steel. I thought of Calvary and I wept; I wept for a long time.” On the twisted walls of that atrium, Frank wrote “House of God” in spray paint, and the spot became a pilgrimage site for the tired workers and firefighters at Ground Zero–until, in early October, the cross was recovered and set on a pedestal, to become the meeting point for services of all faiths. “That cross is a symbol of freedom and it is for everybody, this is why it has to be preserved,” said Silecchia, who has made protection of the cross his life mission, in the face of threats from the usual American ‘defenders of civil rights’ to take to the courts to get rid of this highly visible and cumbersome symbol that dominates Ground Zero.

Faithful Forever
“So much is being said about what type of memorial to build on that spot. For me, the cross is enough,” Jean Palombo said to some friends after the service in St Peter’s. Her testimony–given with her arm in a sling because of a fracture that has complicated even more a life that was already hard–moved the people listening to her in the church, who broke into a long applause. Jean is the widow of firefighter Frank Palombo. Hers is a history of a conflictual relationship with faith, one full of questions. “Seventeen years ago,” she recounted in St Peter’s, “Frank and I had already been married for three years and had no children. I didn’t want them; I knew that having them meant bringing them into this world of suffering.” It was Frank’s insistence that brought her back into the Catholic Church, from which she had moved away, and helped her understand “what God wanted from me.” In sixteen years, the Palombos had ten children. And now that the head of the family has disappeared under a tower where he had rushed to save other human lives, Jean thanks God for the children she has been given (“without them, I wouldn’t have made it”) and for the friends who are close to her. “My husband is helping me,” she said. “His presence is stronger every day. The Lord has been faithful with Frank, with me, and with all of us who are faithful to Him. Every day I think that I am a widow, I have ten children and a broken arm, and I can’t make it. And God says, ‘That’s right Jean, you can’t, but I can, and I will.’ And He does, every day.”

The reading of Fr Giussani’s “Woman, do not weep” followed Jean Palombo’s words, connecting profoundly with them, just as the singing of “Crux fidelis inter omnes” provided a natural accompaniment to Silecchia’s story about the Cross, and the words of the Pope right after September 11 embraced the testimony of Tom Cashin, a great friend of the New York community recently promoted to vice-commander of the Fire Department, who told of the difficult year of the firefighters (deeply affected by the death of 343 companions) and the personal experience of gaining deeper insight into “the value of human life.”

A Complex Challenge
It was a complex challenge to propose a gesture for the September 11th anniversary. The city administration reflected for months on what to do that day, then it surrendered to the evidence: it was better to let the dead speak, because the living do not know what words to say to comfort people. Thus, at Ground Zero on September 11, 2002, all 2,801 names of the victims were read, and the only official speeches were those of some famous dead: Lincoln, Roosevelt, and the authors of the Declaration of Independence.

The gesture at St Peter’s was something very different. Faced with the difficulty for today’s men in making sense of what happened, the evidence of the Cross and the hope that arises from the encounter with Christ present were offered. “How can we give a witness of life next to a place of death?” Fr Richard Veras asked as he opened the commemoration. The answer came from the words of the Pope, Fr Giussani, Péguy, songs by the choir led by Christopher Vath, the reading of passages from the Gospels, and testimonies from Cashin, Silecchia, and Jean Palombo. “Death and terror have no comparison with the life of Christ,” wrote the Archbishop of New York, Cardinal Edward Egan, to CL as he gave his fatherly blessing to the service. “We proclaim with joy and without fear,” concluded Fr Rich before intoning the Our Father, “that we belong to something greater.”

An e-mail message received in the CL office in New York the day after the memorial was one of the most beautiful gifts for those who worked to prepare the service. “Thank you for such a moving encounter,” wrote Michael T McVey. “As someone who has spent the past year working at Ground Zero, I wondered how anyone could or should commemorate more meaningfully the darkest day in our country’s history. Your ceremony met and indeed exceeded my expectations. May every effort of yours continue to be blessed as much as this moving liturgy”.