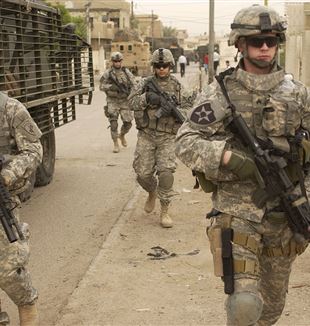 Everyday, I wake up and beg for mercy. I beg that our Lady guides me. I beg that Christ through the Holy Spirit will inspire me to be a saint in the desert (or wilderness) of military life. Just today, before setting down to write this letter, I was literally called and asked if I wanted to personally fill a tasking for a human resources job with duty in the “box,” which means Iraq. To me, the war in Iraq is not some abstract geo-political event that one just talks or debates about. I live the reality of possibly having to deploy there, as many of my friends already have. This vocation, though, not only affects me personally, but also my family. This vocation, this “profession of arms” affects every aspect of one’s life. A soldier doesn’t have the choice to work eight hours a day; he and his family live the reality of this vocation 24 hours a day, seven days a week. This is through the long work hours, the deployments for months on end, the possibility of death, etc. In fact, just recently, a close personal friend and fellow Army officer died in a tragic accident. Going to war and death is something I face everyday as a soldier. I can remember, as clearly as if it happened today, the time that I had to serve on a casualty notification team whereby we informed the wife and children of a fellow officer in my Special Forces unit that her husband had just deceased. This event is something I shall never forget. Therefore, how do I respond as a Catholic and as a member of this Movement called Communion & Liberation?

I respond by recognizing that there is a God and that I’m not Him. I’m just a finite human being who begs for mercy in front of the presence of this Other. Approximately six months ago, my battalion commander offered me an opportunity to command a recruiting company, which, in my freedom, I gladly accepted. Being a leader is one of the greatest forms of servitude. This charism has allowed me to recognize in a very real and concrete way the human dignity of my soldiers and of all those that I am responsible for enlisting in the US Army. This charism has allowed me everyday to wake up and beg for the mercy... beg for the ability and grace to recognize Christ in my midst. This charism has not only helped my marriage, it has saved, in a very real way, my vocation as a soldier. It has given it meaning when I was truly struggling with the reality that I am Catholic first and a soldier second and asking the question: How do I correlate the two? Are the two even compatible?

Through the friendship and help of a dear friend of mine who I met through the Movement, Maurizio Maniscalco, better known to those of us in America as Riro, I’ve come to realize that the charism is the ability to embrace the totality of reality. For me, this means not only being a husband and father, but also a soldier. Everyday, I have to get up and sell the US Army to college administrators, high school principals, mayors of cities, presidents of corporations, and, most fundamentally, to applicants who are in the process of joining the military. Is this an easy thing to do in the face of war with Iraq? A war to which I could be sending people to die? A war which many consider unjust? No, of course it is not. It burdens my heart enormously... it keeps me up late at night, deep in thought and in tears. What people have to come to realize is that soldiers are not barbarians. We do not desire to kill or harm anyone. In fact, we, more than anyone else, understand the consequences of what war brings because we experienced it for ourselves, but sometimes wars are necessary in our fallen world. It’s not for me to determine the policies of the US Government. It’s not for me to determine the strategic, operational, or tactical goals of those officers appointed over me. All that I can do is affect those that are around me, which includes my family and those that I lead. As an officer, I do two fundamental things: 1) accomplish the mission, whatever that is for my unit, and 2) take care of my soldiers and their families. I do all of this with a great sense of humility. I do this knowing that I’m a servant first and foremost to Christ who gives me the strength to breath and to live–to live a vocation, which He calls me to do. Why has He chosen me? This is a mystery. The closest reason that I’ve found to explain why came through studying writings of the Second Vatican Council, the Universal Catechism of the Catholic Church, and that of our Holy Father, Pope John Paul II. The role of the laity, and of all Catholics, is to be the “salt of the earth.” Catholics are called to actively participate in all professions, even those that place us in the desert, and to bring the light of the Good News to everyone. To live this vocation of being a soldier is my path of sanctity. At every Mass, we pray for our political leaders and often we pray for the soldiers who are deployed around the world (in combat). In these days, I ask and I beg all of you to consciously and to sincerely pray. Pray to Our Lady that grace will be there for them. Christ is present even in the “fog of battle.”