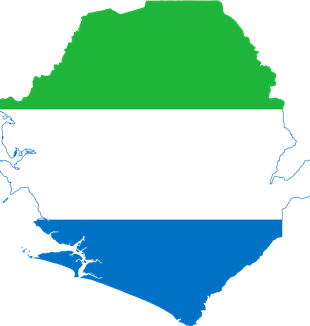 The overall situation of Sierra Leone is tied to Great Britain, because of its colonial past of 40 years ago, trade relations that have been kept up, and an inherited culture. Thus, the English have returned to put things back in order and to restructure the army; and if we think about the massive presence of UN troops still there today, we realize that the country’s national security is still in the hands of foreigners.

People feel safe. They can travel without fear of being attacked and can reach any part of the country, roads permitting. Foreigners, too, feel safe. Ordinary people travel and, judging from those doing the traveling, it appears that prices are reasonable.

The roadblocks, that were such an obstacle to traffic in the past, have been reduced considerably, and where they still exist, one can get past them quickly.

Economic Aid
The amount of $650 million has been pledged. The nations and organizations involved are Canada, China, France, Germany, Italy, Japan, Holland, Norway, Sweden, Switzerland, England, the United States, the European Commission, and a plethora of international funds and agencies.

Unfortunately, it does not seem that substantial investment is forthcoming from the private sector. For the most part, there has only been participation on the part of governments and NGOs, and it is well known that these do not represent the real economic pulse, as the risk of an investment does. We will be able to speak of economic stability only when companies interested in trade and profits and not in aid and development begin to invest their capital. For now, the market is in the hands of the usual Lebanese, often people who were born here, with property to protect from before the war began. They cannot be considered a thermometer of economic stability. Some container ships can be seen docking, but there is not too much movement at the port. Few public works are visible.

The Past is Past
In recent days, the interest of journalists is focused on the condemnation of the publisher of the newspaper For the People, Paul Kamara, a man who has always been at the forefront of his profession under various governments, legitimate and otherwise. He has stepped on the toes of a judge. In his newspaper are written things like, “There is a lot to be said–it is something that gives food for thought–if Mr Paul Kamara had difficulty finding a lawyer to represent him in court solely because a judge is involved in the case. One wonders how ordinary people manage to fare in similar circumstances.”

The public’s confidence in justice can be a cause for reflection, because we are entering a period of great social and historical importance, with the institution of the Court for War Crimes on November 30th, and the Truth and Reconciliation Commission, which has begun work in fourteen districts. Some young people, asked privately if they would be willing to testify, gave very evasive answers like, “I want to forget. The past is past.” The attitude of a girl who tried not to see her persecutor who was walking down the opposite side of the street is another sign indicating an evasive attitude caused by fear that the instability of the situation or an unforeseen social reversal could still put them in danger for having cooperated with justice.

Who Supports Them?
Socially, the situation is hard. It seems that there are not sufficient funds for creating jobs, and a return to the land is not so easy or obvious, for various reasons that are a bit too complex to be illustrated in a brief sketch.

Even those who do want to go back to the land, after all, have to wait an entire season before the harvest. In the meantime, who supports them?

A certain number of agencies have facilitated the return of people to the villages, building a substantial number of small houses to replace the villages that were burned. But it’s one thing to build houses and another to rebuild the social fabric. This is why it will take time. So many people have been killed, people who counted in society, and others are still missing.

Elections are being held in these very days for the tribal chiefs to replace those who either died a natural death or were killed by the rebels. The social fabric is slowly being put back together, and families are finding each other.

The fight against corruption continues, but it is an unequal fight. It gives me pleasure to note the efforts made by people who are trying to build two rooms, making clay bricks with their own hands, but it is a scandal to see enormous, well-designed buildings made of reinforced concrete in zones that are hard to reach, thus costing twice as much.

These are some aspects of the Sierra Leone of today. We have to give credit to so many people who, despite their many sufferings, injustices, physical impairments, and loss of loved ones and property, are still ready to begin again. How many “shock absorbers” God has given them, that despite everything, they are still able to smile at life!