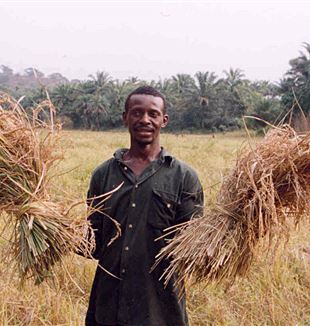 There is an African proverb which says, “When two elephants fight, what gets trampled is the grass.” There are many countries in the world where this proverb has been confirmed. One of these is Sierra Leone. There, for more than ten years, the rebels of the RUF and the ECOMOG have defied each other. The grass is the civilian population: men, women, and above all children, who have been subjected to the violence of a war that began in 1991 and only today seems to be ending.

In all of Sierra Leone, the only ones who have never left, even during the worst moments, are the missionaries: the Xaverian Fathers, the Giuseppini of St. Murialdo, the Sisters of Mother Teresa of Calcutta, and other religious orders. All at work, all at the service of a population which today is trying to emerge from a war that it never wanted. All are convinced that, after some terrible years, Sierra Leone now has a new and unique chance, one that must not be missed, to find hope again.

A White Cassock
“Already at the airport,” Alberto Piatti of AVSI recounts, “it was impossible not to be shaken by what we saw. The soldiers and the general confusion practically paralyzed us. And despite being used to travelling in hot spots, in Freetown I experienced a moment of disorientation. Then finally the white cassock we saw on the other side of the customs barrier reassured us. It was Fr. Berton. He pulled us out of the inferno of the airport and handed us over to two of his boys.” Among the “mountains of the lion”–the name Sierra Leone comes from the Portuguese Serra Leõa–Fr. Berton is spending his life for his boys, the kids whom war has despoiled of everything: home, family, even innocence. For them, together with other Xaverians, he has founded the Family Houses Movement, opened schools, organized training courses. Thanks also to the Christmas Tents, he has been able to build hospitality centers where he can host the former child soldiers. Today, to continue his work, he needs more help. So he invited his AVSI [Association of Volunteers in International Service] friends to visit the works that have grown up in these years.

The Center at Lakka
“After five hours between forced stops and moves,” says Giampaolo Silvestri, AVSI responsible for Africa, “we arrived in Lakka, where Fr. Berton, with funds from the Tents, has bought a former hotel to make a preliminary hospitality center. It is a place with a stupendous view of the ocean, where about a hundred kids live. They arrive from the refugee camps on the northern border, sent there by the international agencies and non-governmental organizations operating in the region. Fr. Berton houses them in the bungalows. In three years, almost 2,000 of them have come through Lakka: former child soldiers and girls–who make up 60%–who have been kidnapped by the rebels and forced to do every kind of thing. Many of them, despite their young age, already have children of their own. They stay at the center about six weeks, where they have meetings, games, courses, and moments of normal life, organized with the help of volunteer associations and humanitarian agencies. And in the meantime Fr. Berton, together with an Italian sister and a Spanish missionary, they too Xaverians, look for the youngsters’ families and, for the older ones, they search out craftsmen from whom they can learn a trade. For the abandoned kids or those whose relatives don’t want to see them anymore, he tries to find a place in one of the 13 family houses which he has set up in these years in Freetown.” It is an unceasing labor, a continual work of hospitality and charity for every single child, and something that leaves those who see it open-mouthed.

Moses’ House
In order to understand what the presence of Fr. Berton and his confreres means in Sierra Leone, you have to know the stories that give life to his days. “He took us to visit a special hospitality house,” Arturo Alberti of AVSI recounts. “Usually the houses are a point of reference for a dozen kids. But he had conceived of this one with only one boy in mind: Moses, handicapped, homeless, given that name because he was found abandoned in the middle of a torrential downpour. Given all the kids who are homeless and without a family, devoting a house to just one could seem to be an absurd decision. But in reality that house was conceived not only to take Moses in, but also as an education in hospitality for all the people involved in that work. A concrete sign of respect for life and for the human person in any situation whatsoever.” Every so often, Moses disappears, runs away, and no one knows where he is. But then he always comes home, because he knows that there is always someone there to take him in, whenever he comes, whatever he has done. Moses’ house is the sign of a unique love, which never tires of forgiving, just as Fr. Berton never tires of welcoming and forgiving. “He told us,” Alberti says, “about a boy kidnapped at the age of 12 by rebels and forced to shoulder a rifle with them. Worn out by the violence he had undergone and committed, one day he came to Fr. Berton and said he wanted to confess. Fr. Berton asked if he had been baptized. He answered, ‘No! But I need somebody to forgive me.’”

We Need You
The Xaverian Fathers were gathered together on a retreat in the days when the AVSI group was visiting, so they took advantage of the chance to eat lunch with them. Among them was Bishop Biguzzi of Makeni, along with many other missionaries, including a number of Italians. “At a certain point during lunch, one of them,” Piatti recalls, “realized that we were members of CL. He grew enthusiastic. As a boy he had been a high school student of Fr. Giussani, and he became excited remembering those lessons. He started talking to the Bishop to persuade him that a presence of the Movement was needed in Sierra Leone. Trusting in some of his confreres who had known Fr. Giussani and were supporting him, he continued to repeat, “We have to ask him to send somebody.” Fr. Berton, too, would like for someone to help him in his work, to take it forward and inherit it from him. Saying good-bye to his AVSI friends before they left, he did not mince his words, “You made me run around like a madman. You have paid a visit at a Milanese pace. And now that you have finally come and seen with your own eyes the situation of Sierra Leone, I want to tell you plainly and clearly: our family-house movement now needs something more than the financial and economic aid that you have given us. It needs the spiritual fatherhood of CL.” Have a good trip. See you soon.