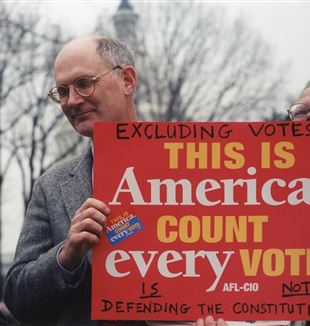 “The important thing is for somebody to win. Either one, it doesn’t matter. All we want is for them to hurry up and give us a President.” Ziggy is 39 years old, originally from Erithrea, but he has almost always lived in the United States, between New York and Florida. He has not erased his African roots, but he reasons with the mentality of a Yankee. “We need a president,” he repeats as he drives his taxi through the streets of West Palm Beach, accompanying yet another journalist–this time an Italian–who has come to this Disneyland of the golden years to try to understand what didn’t work in the American elections of the year 2000. Ziggy’s simple, sincere words faithfully mirror how a large part of America has lived, in the past few weeks, one of the most unbelievable moments in the country’s history. Accustomed to going to bed on Election Day already knowing who would occupy the position of command in the White House for the next four years, this time Americans have lived a nightmare which not even the screenwriters of Hollywood would have been able to make up. America went to sleep (late), convinced that the next president was George W. Bush, woke up the next day without a leader, and remained in a state of uncertainty for days and days, while it watched on television an interminable political and legal soap opera, made up of court appeals and manual recounts of the ballots.

Unending legal battles, followed minute-by-minute by the television networks, are nothing new for the US. The O.J. Simpson case and the tragicomedy of Sexgate that almost ended Bill Clinton’s political career are meaningful examples. But while for O.J. and Bill the prevalent feelings of ordinary people were a morbid and voyeuristic attention, this time the sensation is different: a creeping unrest. Not fear, not the panic which some observers thought they perceived in the streets just because Wall Street and the Nasdaq reacted by losing 200 points every time Bush and Gore took a legal shot at each other. This is something more subtle.

Disquiet
This sense of disquiet, of discomfort will last for a long time, even after January 20th, when the new President will place his hand on the Bible, swear fidelity to the constitution of the United States, and take the place of Clinton (who people are already beginning to miss). Ziggy’s words reveal this; you can read it in the letters to newspaper editors from people in the heartland of America, far away from the skyscrapers of New York or the cultural atmosphere of San Francisco, in places like Iowa, Kansas, Montana. “This electoral standstill has gone on long enough; we want to get back to our lives,” wrote a reader from Arizona, Mendel Cooper, to Newsweek in the second half of November. Bush or Gore, it doesn’t matter, but we want a President, people say. We want a point of reference, a leader, an institution to look up to.

But not even the arrival of the new President will be enough to quell this disquiet. This is not only because the new occupant of the Oval Office will have only “half a mandate,” or because of the problems the executive will have to face dealing with a Congress divided in two between Democrats and Republicans, without a strong majority. To understand this widespread feeling, we have to go into this more deeply, perhaps going back to what happened in November under the warm skies of Palm Beach, a sleepy vacation paradise for retirees, fed by the dollars of elderly New York Jews and the local Masonry, among others. We have to revisit, in slow motion, the scene of Judge Charles Burton, Chairman of the County Electoral Commission, lifting up a ballot, looking at it the way a doctor would study an X-ray, pronouncing solemnly, “I can see light!” On his right, one of Gore’s lawyers nods: you can see light, the cardboard is almost punched through, the vote is valid. On his left, a Bush lawyer shakes his head: the punch in the cardboard, called a chad, is not detached, it is only “pregnant,” swollen but not pierced through, the vote is not valid. The scene is repeated hundreds, thousands of times in front of TV cameras from all over the world. It was a desperate attempt to try to discern (from the holes in a piece of cardboard) the will of the elderly voters who had not punched all the way through their cards, leaving the chads hanging–which under the optical beam of the counting machines caused the inevitable response of “unmarked ballot,” thus rendering it invalid.

Punched Holes and Technology
Reduced to squinting through microscopic holes in cardboard to decide who to send to the White House, in Florida America saw a myth crumbling: that of the god of technology. And nothing could cause greater disquiet and discomfort in a country that one of the most famous experts in sociological predictions, John Naisbitt, described in his latest book as inhabited by a population “drunk on technology.” The United States (and by reflection increasingly also Europe), as a culture, is deifying technology, entrusting to Internet, pocket computers, the click of a mouse, the task of giving a sense of security, creating new social relationships, and filling a void of “meaning” that is more and more widespread. And in the absence of other points of reference, they have assigned to the President the task of leading the country toward a technologically radiant future. In the final analysis, to many it doesn’t matter who is President: Democratic or Republican, Gore or Bush, they just want someone to be in the White House, “so we can get back to our lives,” as Mendel wrote from Arizona.

In this scenario, first the sensational mistake made by TV newsmen on Election Night and then the badly punched ballots in Florida have been devastating. Also implicated was the voting machine used in New York, a sort of slot machine where often the elderly asked the people in the booth next to them to help them “pull the lever” (and what happens to the “secret of the ballot booth”here?), and where there were even cases of people voting twice. In super-technological America, 34% of the voters punched cards like those in Florida, 19% pulled levers as in New York, and only 9% was able to take advantage of electronic procedures. Every state, every county has its own voting method for choosing the most powerful man on earth. The system works if one candidate prevails strongly over the other, if the voters give 60 or 70% of their ballots to one of the two contenders. But if the race is neck-and-neck, as it was between Gore and Bush, the mechanism fails.

Bordering on the ridiculous
To move the election forward, they had to take to the courts, putting the matter in the hands of judges who were elected as Democrats or Republicans and are often partisan. In the end it will all be concluded, somehow, “democratically.” But the disquiet will remain. In a country where the number of religious denominations has doubled (from 800 to 1600) in the past 35 years, where every year about a thousand non-traditional churches are established, where the sale of religious books has sky-rocketed (150% growth between 1991 and 1997), technology and the President could not help becoming deified, transformed into religions. The decline of these two myths–two years after the humiliating Clinton scandal which seriously weakened faith in the presidency–and the discovery of the fragility of the mechanism on which the most solemn moment of the democratic life of the country is based, inevitably has left an even greater sense of void in the lives of many. The years of the New Economy and of economic growth have produced a rich and anxiety-ridden America, where one out of eight people is now or has been on Prozac and where vitamins and plastic surgery are enjoying a golden age. But nutritional supplements and face-lifts are not enough to hide the emptiness that the most looked-to people on earth may be feeling more and more often right around the area of its heart. And certainly it does not help the morale to discover that even a “perfect” democracy can be held hostage by a ballot imperfectly punched by a Florida retiree.

It could be that this whole story is a sign, revealing a power–technology–that can place the most powerful country on earth at a disadvantage. Thus, perhaps the new occupant of the White House, paradoxically, will not be “half a President,” but an even stronger one for having overcome such an anomalous challenge.